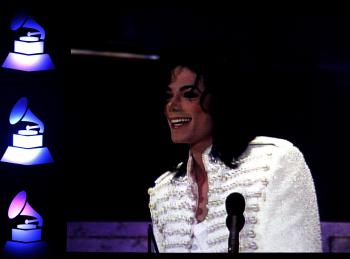 An image of Michael Jackson is displayed on a monitor during the 52nd annual Grammy Awards-Special Merit Awards at the Wilshire Ebell Theater on Jan. 30, 2010, in Los Angeles. (Frederick M. Brown/Getty Images)
Arts & Culture

BY Resa Xu TIMEAugust 27, 2010 PRINT
Michael Jackson, even after he passed away, is setting new records. He is now the most downloaded artist of all time, according to Nokia’s Ovi Music Store.

The “King of Pop” has surpassed Lady Gaga, Elvis, the Black Eyed Peas, and Rihanna in downloads. His popularity increase may be due to the emerging of his birthday on Sunday, Aug. 29.

Among all the countries, he is most popular in India, where 26 percent of the total downloads come from.

His hometown, Gary, Ind., will host a party to celebrate his birthday on Saturday. It will take place at the same time as the MJ Fanvention, a celebration that runs from Thursday to Sunday.

The MJ Fanvention will feature a tribute concert to Jackson, with Melba Moore and Jackson’s former guitarist Jennifer Batten, and a choir formed by the Indianan fans, according to the celebration’s website.