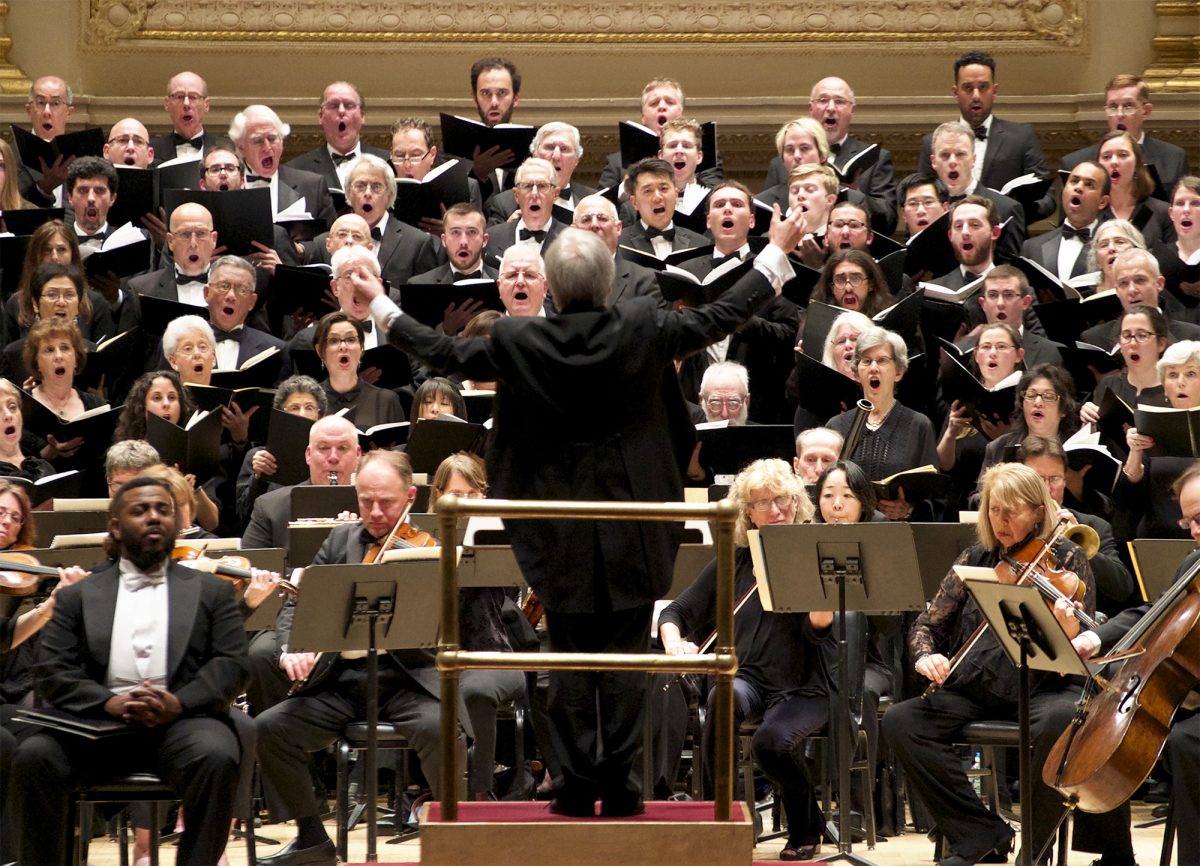 Mezzo Solos by Brahms, Elgar, and The Brothers Balliett

On May 3, The Cecilia Chorus of New York performs an interesting triptych of pieces shining the spotlight on the mezzo-soprano soloist.

The concert honors Alice Mandelick Flagler (1872–1918), who was a mezzo-soprano, founding member, and benefactor of the chorus. On contemplating the role of altos, conductor Mark Shapiro found that these voices often hold together the chorus, only to have the audience give the glory to the sopranos. In opera, mezzo-sopranos sometimes suffer the same affliction, relegated to a side character.

But digging into an array of works, Shapiro found pieces by Johannes Brahms and Edward Elgar and was “struck by the poetry latent in each composer’s choice of a lone mezzo to counterbalance the chorus,” Shapiro wrote in a conductor’s note. “She embodies nobility, wisdom, tenderness—and a poignant solitariness.”

Furthermore, the “Alto Rhapsody” by Brahms and “The Music Makers” by Elgar both give us a deeper look at the journey of an artist.

While putting the concert together, the chorus had also commissioned contemporary composers The Brothers Balliett for a new work, which will be premiered at the same concert.

Mezzo soloists Renée Tatum, Naomi Louisa O’Connell, and Amanda Lynn Bottoms will perform with the choir on May 3 for the concert at Carnegie Hall.

Out of the three works, Brahms’s “Alto Rhapsody” is likely the most familiar to audiences. While it is not often performed in concert, many singers have made recordings of the work.

“It’s a jewel of the repertoire, if you’re lucky enough to have the opportunity to sing it,” Renée Tatum said by phone.

For Tatum, it is a new piece to perform, and an interesting challenge.

The story is about the inner life of an artist, she explained. The text comes from a poem about the wandering of a lost soul, urged to give up his suffering and to find spiritual fulfillment.

Being able to perform a work that allows a singer to show so much of his or her artistic range is most rewarding, and Tatum finds that in the Brahms “Alto Rhapsody.”

“You have the opportunity to reveal a lot about yourself as a singer and as a musician,” Tatum said.

Elgar’s “The Music Makers” is similarly metaphysical. Commenting on the piece itself, he said, “I have written out my soul.”

The text, the poem “Ode” by Arthur O’Shaughnessy, might seem lofty at first glance, but “it actually hits quite close to home,” said Naomi Louisa O’Connell by phone.

“It speaks about the role of artists in society, as well as what the life of an artist can be,” O’Connell said. So, in fact, it feels personal, and can be so even if you are not an artist. “It talks about inspiration, and this goes beyond artists; I’m sure that the notion of wanting to make a dream become reality will resonate with most people.”

“Something to listen out for in the piece is how Elgar set the lines ‘We are the music-makers / And we are the dreamers of dreams,’ which begin and end the piece. It’s otherworldly and gives me chills every time I hear it,” she said.

O’Connell most enjoys a piece that lets her plug into a story and find her character, and the way Elgar insightfully sets the text to music allows for that.

“It’s gloriously colorful and will stick you to the back of the hall with sound in places, but he also skinnies it down to the barest whisper when the text requires it,” she said.

Identical twins Brad and Doug Balliett wrote “Fifty Trillion Molecular Geniuses” using text from neuroanatomist Dr. Jill Bolte Taylor’s book and Ted Talk “My Stroke of Insight.” It is her story about how a stroke took away her brain functions one by one—speech, movement, understanding—but remembering every moment.

Amanda Lynn Bottoms says the piece is unexpected both musically and as a story.

“The things that are said are things we never would think about on a daily basis. We don’t consider that a small molecular part of us allows us to breathe and to love and to smell,” she wrote in a statement about the new work, which begins with a fugue. “This is a very elevated experience. It forces me to dive even further into my acting, my interpretation of text.”

“There are moments of joy and moments of tragedy and fear. I’m excited to dig into my bag and pull those out,” wrote Bottoms, who has experience with acting in musical theater.

All three of these works grapple in “search of a larger purpose,” Shapiro wrote. They invoke the universal yearning for meaning, wholeness, and belonging in both place and time.”

In these works, the mezzo becomes a Romantic hero isolated in an intimidating landscape, Shapiro discovered, making the program an interesting musical journey through which listeners might just come to discover some deeper truth, or something about themselves.