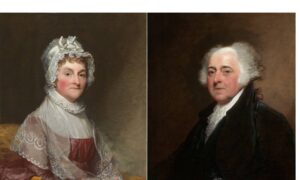 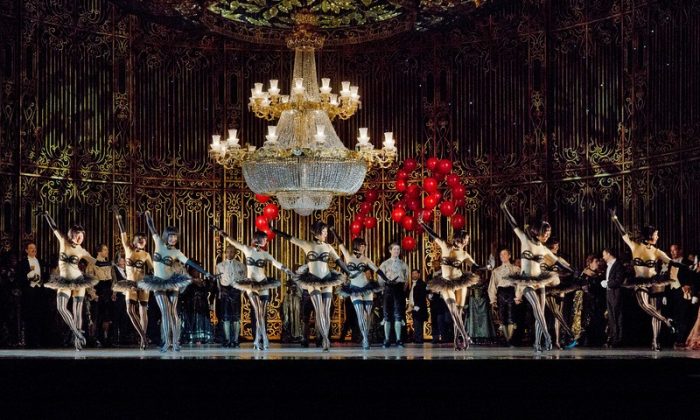 NEW YORK—The Metropolitan Opera rang in the New Year with a new production of Johann Strauss, Jr.’s popular operetta “Die Fledermaus.” Like many parties, there was plenty of fun, but the festivities went on too long. (Note: I caught the production Jan. 4.)

Jeremy Sams wrote and is directing the new English-language lyrics and playwright Douglas Carter Beane is responsible for the spoken dialogue. Their contributions have both ups and downs.

The dazzling sets and costumes are by Robert Jones, the lighting is by Jennifer Schriever, and the zippy choreography is by Stephen Mear.

The production moves the action from New Year’s Eve in Vienna in the mid-19th century to the eve of the 20th century in the same city. Apparently, the adapters like the look of the era and they certainly don’t stint on the visual elements.

The first act takes place in the bordello red drawing room of the Eisensteins with two large paintings that look like the work of Gustav Klimt. The second is an extravagant party scene. The third is set in jail and is necessarily less eye-catching than the earlier scenes.

The script reaches every which way for a joke. There are references to Barbra Streisand, Andrew Lloyd Webber, clergy abuse, and the coming horrors of the 20th century. Some are funny and others in bad taste.

There are so many allusions to current people and scandals that it might have made more sense to update the action to the present and move the setting to the United States. Also, at almost three hours (including two intermissions), the events take too long to unfold.

The convoluted plot begins with the wealthy couple Gabriel and Rosalinde von Eisenstein (Christopher Maltman and Susanna Phillips) in their extravagant apartment. Gabriel is about to go to jail for a fight with a policeman; his wife Rosalinde is being romanced by her former lover Alfred, an opera tenor (played by Michael Fabiano).

Meanwhile the von Eisenstein’s chambermaid Adele (Jane Archibald), wants to sneak out to a New Year’s Eve party at the home of Russian Prince Orlofsky (Anthony Roth Costanzo) to which she has been invited by her actress sister Ida (Betsy Wolfe).

When the prison warden Frank appears to arrest Gabriel, Alfred goes in his place. This is all part of a plot engineered by the Eisenstein’s ostensible friend Dr. Falke (Paulo Szot) to get revenge for an embarrassing incident which led to his becoming known as “die Fledermaus”: the bat.

All of them turn up at the same party and take on assumed identities with a mélange of accents. Apparently every European country has an accent except for Austria. The amoral Gabriel (pretending to be a Frenchman) unwittingly romances his own wife, thinking she is a Hungarian countess.

Prince Orlofsky is usually played as a trouser role by a mezzo-soprano but here he is played by a countertenor with effeminate mannerisms.

The third act takes place in jail, where Frosch the jailer (played by the engaging Danny Burstein) delivers a long monologue with allusions to the Marx Brothers and Bert Lahr, among others. (Burstein doesn’t sing here since his voice is not operatic, but he appeared with Szot in the Lincoln Center production of “South Pacific.”) Anyway, the false identities are finally revealed and the von Eisensteins reconcile.

Sometimes the script sounds like outtakes of the vaudeville routines from “The Nance.” On the whole, Beane’s work on “Rodgers and Hammerstein’s Cinderella” struck me as more successful.

Strauss’s music is especially well served by the cast. Szot is a highly animated Falke and his singing voice is sumptuous. Archibald and Phillips are also standouts, both vocally and in their comic performances.

Costanzo sings with style but a mezzo is better suited to the part. Compare Agnes Baltsa on YouTube.

Fabiano’s singing was especially impressive and the excerpts he performed from Italian operas (including part of “Una Furtiva Lagrima”) make me want to catch him in a major tenor role.

Conductor Adam Fischer led a spirited performance. Indeed, sometimes he seemed to be dancing in the pit.