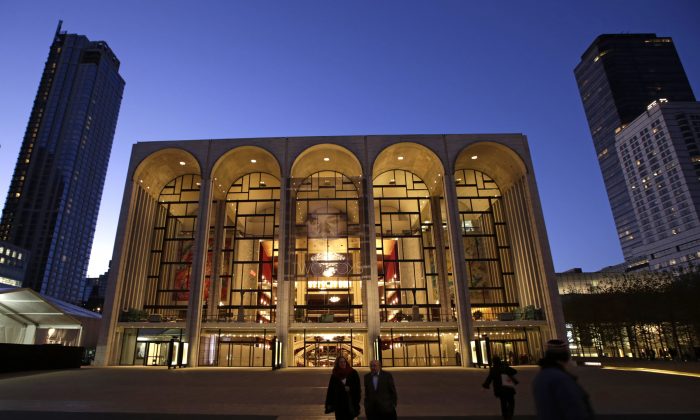 Met Opera Could Shut Down Over Labor Disputes

NEW YORK—Figaro might not be getting married anytime soon. Mimi and Rodolfo might not fall in love in that cold Parisian garret. And Macbeth might never murder his way to the throne.

That’s the bleak scenario at the Metropolitan Opera, where fractious labor negotiations threaten to disrupt the new season for the first time in more than 30 years. This week, the company’s general manager, Peter Gelb, vowed to lock out union members—cutting off pay and health insurance—unless they settle before contracts expire July 31.

And that seems unlikely, given that the Met and unions representing the orchestra and chorus are only now sitting down to serious negotiations on management’s demands for pay and benefit concessions averaging 16 percent to 17 percent. Unions for stagehands and other backstage workers have been meeting with management but remain far from agreement.

The Met says deep cuts are essential if the company is to avert financial ruin, while the unions say the money problems have resulted from Gelb’s bad management and could be addressed by cost savings that include fewer and less lavish new productions.

“We need to impose a lockout because otherwise we have no ability to make them take this seriously,” Gelb said in an interview Thursday. “The short-term pain is something we’d have to live with in order to provide long-term survival.”

Joe Hartnett, who is coordinating negotiations for six units of the International Alliance of Theatrical Stage Employees, counters: “We are willing to tighten our belts if Peter Gelb is willing to cut up his credit cards. It’s more than just our labor costs that’s the problem.”

The last time there was a work stoppage at the Met, in 1980, the company locked out its unions for 11 weeks. The orchestra players eventually won their demand that they be required to play only four performances a week instead of five, but the curtailed season didn’t open until December (symbolically, not with an opera but with a performance of Mahler’s “Resurrection” symphony).

It’s unclear how long a lockout might last this time, but it could hamper preparations for the season, which is set to open Sept. 22 with a new production of Mozart’s “The Marriage of Figaro,” followed on consecutive nights by Puccini’s “La Boheme” and Verdi’s “Macbeth.”

The Met is unique among American opera companies in both the length of its season (seven performances a week from September to May) and the size of its house (3,800 seats and an additional 200 standing room spots).

The way Gelb sees it, the Met is facing a crisis brought on by declining attendance and “donor fatigue,” the unwillingness of wealthy supporters to keep providing unlimited support for a failing institution.

Last season the company reported a deficit of $2.8 million on a budget of more than $300 million, of which more than $200 million went for pay and benefits to the Met’s unions and its principal singers.

That deficit might not sound like a lot, but Gelb said it “could have easily been $20 million to $30 million if I had not been calling up our donors and getting them to fill the gap.”

If the unions would agree to concessions, Gelb said, the savings of more than $30 million annually would inspire the board to carry through a plan to double the company’s relatively anemic endowment of $253 million and guarantee future financial security.

Gelb said he won’t cut union members’ base pay, but wants to trim “high-end” health and pension benefits and eliminate “excessive work rules that trigger overtime on a daily basis.”

As an example of inflated pay, the Met has cited singers in its chorus making $200,000 a year. But Alan S. Gordon, executive director of the American Guild of Musical Artists, which represents chorus members, called that figure misleading. He said their base salary is $104,000, “and everything else is overtime caused by his productions. He wants us to work overtime with no pay.”

Gelb said administrative employees would see their compensation reduced by an amount equivalent to that of union members. He himself took a pay cut in April, lowering his base pay to $1.4 million a year.

“Our people would be happy to make concessions to help the Met survive. But not to help Gelb survive,” Gordon said, “He doesn’t understand how this will poison relations in the future. Our members won’t respect him, they won’t talk to him, they’ll spit at the mention of his name.”

Gelb insists he’s not worried about any “lingering bitterness” resulting from a lockout.

“The people who work here are incredibly professional,” he said. “I admire them greatly and we had great mutual respect for each other, up until I asked them for a pay cut.

“Once the dust settles,” he added, the musicians “don’t have to love me to play well.”