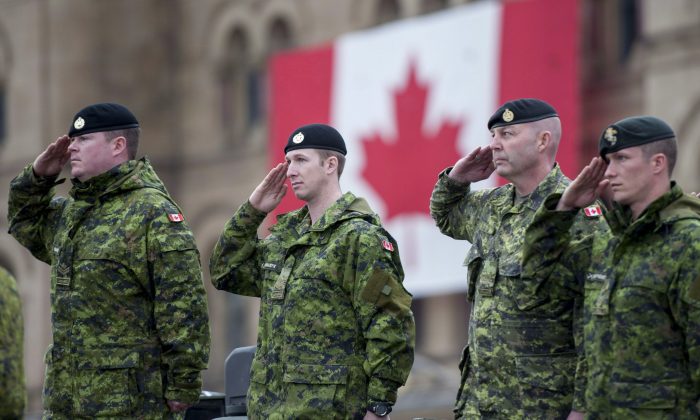 Canadian Forces members salute during the National Day of Honour on Parliament Hill on May 9, 2014. A new Statistics Canada study has found that mental health issues among members of the Canadian Forces have risen substantially in the past 12 years. (The Canadian Press/Justin Tang)
Canada

Statistics Canada’s latest figures on mental health issues in the Canadian Forces show that post-traumatic stress disorder has almost doubled among soldiers in the past 12 years.

The Canadian Forces Mental Health Survey 2013 found that 5.3 percent of soldiers reported experiencing PTSD in the year prior to the survey, up from 2.8 percent in a similar survey conducted in 2002.

The new survey found that major depressive episodes were even higher at 8 percent, up from 7.6 percent in 2002. Among the general public, it is 4.7 percent.

General anxiety disorder among army personnel was 4.7 percent, up from 1.8 in the previous survey. In the general public it is 2.6 percent. Panic disorder has risen from 1.6 percent to 3.4 percent.

In addition, one in six members reported at least one mental- or alcohol-related disorder in the 12 months prior to the survey.

“It looks like the depression and anxiety are double—in some cases more than double—than the general population,” said Sarah Hamid-Balma, mental health promotion director with the B.C. division of the Canadian Mental Health Association.

“What is really jumping out is the mood, anxiety, and trauma-related issues,” she said.

The findings are the result of approximately 6,700 two-hour, face-to-face interviews with full-time Canadian Forces’ members.

Among the possible causes for the higher rate of mental health issues in the armed forces is the increasing number of redeployments, which have been identified as a factor in the increased mental- or alcohol-related disorders.

Another factor could be a shift in attitudes, said Hamid-Balma.

“Maybe people are more open now. These are survey questions asked by researchers to individuals on the phone or face-to-face about symptoms they are experiencing. Perhaps there is more openness now in a decade of people admitting they feel low or have been unable to function. This is self-reporting” she said.

“Is there a hint of a good thing that people are more open to admitting there is a problem or is there more stress and traumas that people are facing with fewer supports? I don’t know. I think we need more research.”

In June, the parliamentary committee on national defence released its nearly three-year study on the state of mental health in the military which detailed extensive issues among Canada’s soldiers.

The parliamentary study acknowledged that it did not spend adequate time on reservist’s issues, but recommended based on testimony that reservists be provided with more resources to address mental health issues.