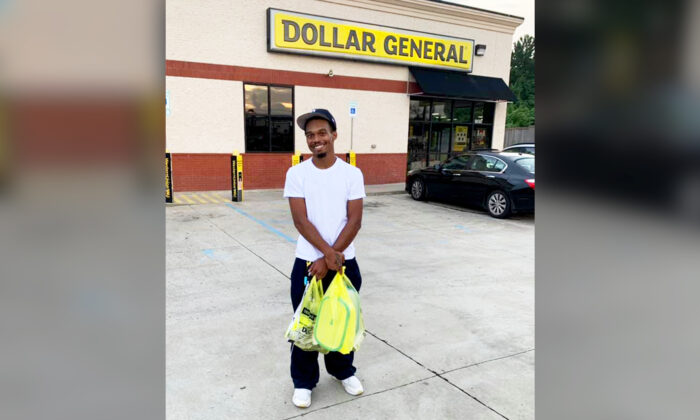 What started as a trip to the Dollar General to pick up a few T-shirts turned into a moment of internet fame for one young man from Tennessee.

Over the summer, Caleb Duncan, 22, who lives just outside Memphis, picked up his purchase and was in the checkout line when he spotted a young lady ahead of him who appeared to be having trouble.

She was rummaging and it appeared to him that she was unable to pay for her goods. The sight tugged at his heartstrings.

“I assumed she was struggling to pay for something, because she kept going through her bags and stuff like that,” Caleb told The Epoch Times. “But she actually was returning something.”

Yet, with a mind to do good, Caleb had already decided to pay it forward; he’d taken the lady at the counter aside—discreetly, so as to not embarrass the young woman—and offered to pay for her items.

Not only that, but Caleb decided to help everyone else in line as well that day.

“I was just like, ‘You know, you never know who you’re helping or what they’re getting,’” he recalled. “I just thought it’d be the right thing to do.”

When one man in line tried to refuse, Caleb insisted that it wasn’t just him; everyone in line (there were five in all) was getting the same treatment.

“It made me feel really good,” Caleb said. “Honestly, I was just really glad I could help people.”

Afterward, one customer, Lou Wright, asked if she could take a photo of Caleb. She then posted it on Facebook where it went viral.

Well-meaning Caleb even caught the attention of Memphis Channel Three and found himself being interviewed and then on the news.

Later, Dollar General gave him two $100 gifts cards and a pin as a thank you. One of the cards Caleb has already given away, hoping to keep the momentum going.

“Anybody that reads this, just pay it forward,” he told the newspaper. “Whenever you get a chance.”