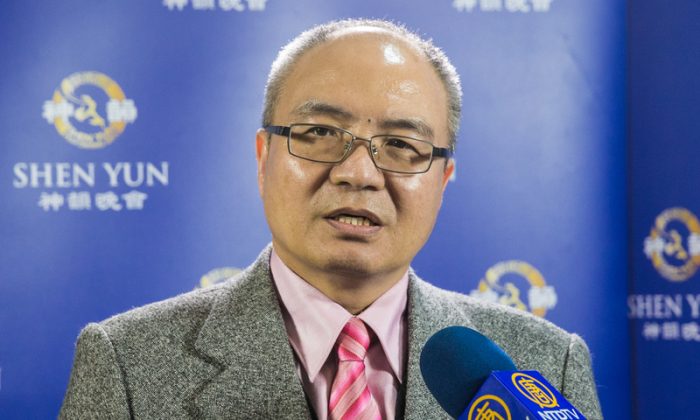 Memory of Shen Yun Will Last a Lifetime

KEELUNG, Taiwan—“I had to come see such a top-class performance,” said Chang Chien-Hsiang, Chief of Keelung City Cultural Affairs Bureau, after seeing the show on March 9. Chang said that the Shen Yun’s performance was definitely unforgettable.

Chang has seen Shen Yun’s performance for three years. He admired the unique creation and the artists’ miraculous skills, “Every year there are many new ideas and creations. The dances are amazing, and I can see that these artists have spent a long time practicing such highly skillful techniques such as spins and somersaults. I am so glad that the citizens in Keelung get to see such a top-class performance.”

At the heart of Shen Yun is classical Chinese dance known for it technically demanding spins, flips and turns.

Chang recounted the art elements he saw, “The background animation is beautifully-designed to fit into the performance and coordinate with the artists’ movement. The men are powerful and masculine and the women show tenderness and elegance. The talented mix of Chinese and Western musical instruments makes the music pleasing in every program. The entire show is purely compassionate and beautiful.”

“I can see that behind every program there is the hard work of the staff.” In the end, Chang stressed, “I hope Shen Yun can come to Keelung every year! I encourage everyone to see it. The performance will definitely be unforgettable one’s whole life.”

Lai Chiu-Huang, convener of Chinese Ming-Tang Health and Spirit Cultural Development Association, saw Shen Yun’s performance for the first time on March 9. He was very moved after the show, saying, “I know what Shen Yun wants to do is to recreate the 5,000 years of Chinese culture and the cultural heritage of the great land of China.”

“There are many messages in the details of the stories,” Lai smiled, “I wrote them down during the performance so I can contemplate them after I go back.”

Lai felt strong energy during the performance. “The background color is basically yellow. Yellow is the theme color of the show and it’s symbolic of our great plain and the source of our energy,” he said.

The artistic elements impressed him as well. “The most unique part of the stage design is the background animation blending in with the people on stage. The artists’ movements connect with the characters’ in the projection without any glitches,” he said.

And the music “is very powerful and refreshing. When Chinese traditional music instruments combines with western music instruments, it somehow makes the overall presentation perfect,” he shared.

Lai stressed in the end that “Shen Yun carries a certain weighty responsibility in passing down Chinese culture.”