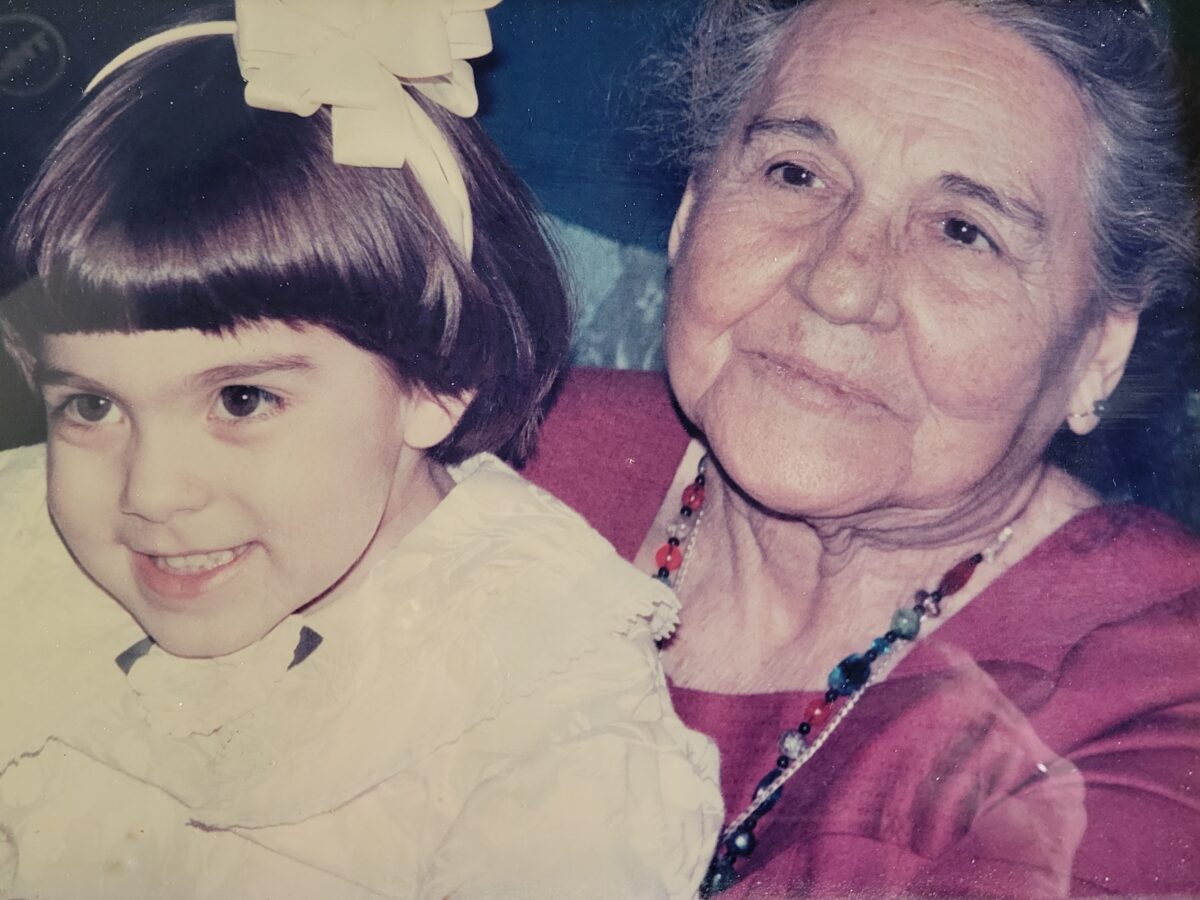 Memories of My Mother

She carried herself like the Spanish aristocrat I fashioned her to be, with a grace all her own
BY Anita L. Sherman TIMEMay 4, 2022 PRINT

That summer day in Portland, the parish priest was in the old neighborhood and visited the house as a matter of courtesy since he knew that my mother was old and ill. According to my sister, his appearance standing at the bedroom door signaled to her that she must be dying and he was there to administer extreme unction and perhaps anoint her with oil. He stayed a brief time and gave her holy communion. Comforted, the next day she died.

My mother’s name was Aurora. Her funeral was held on what would have been her 94th birthday in the month of July some two decades ago. The service was small. I was fine until the notes of “Malaguena” wafted through the air.

When my sister phoned to say that she had died, my sadness was overshadowed by my relief. Her last years had been difficult and without dignity for her.

A series of strokes had left her unable to walk and her entire left side was paralyzed. Her vision, which was already bad, worsened and she wasn’t able to hear.

Yet, her mind was intact, and even though she tended to wander down paths of the past, she was aware of her deteriorating condition and frustrated by her inability to do the things she loved.

She could only read for small periods; the letters appeared jumbled when she was able to make them out, and her fingers had long ceased to be able to crochet or hold a pencil long enough to fill in the blanks of the daily crossword puzzle.

But there was a time when mother was strong and her fingers were nimble.

My greatest pleasures were found in the shopping trips that we took together.

We’d get on a faded red bus that wound its way through our northeast neighborhood nearly on the hour and head to downtown Portland, Oregon, some 30 minutes away.

Once there, she rarely released my hand. We would go to our favorite department store haunts.

On one trip, she bought me a pale green sweater that didn’t ride up my arms. I remember the polished buttons.

She also bought me a new lunch box for school. She liked the one with a Scottish plaid design but let me buy the one plastered with Superman comics. I was a hit with the boys during lunchtime. They would gather around, not noticing me in particular, but the lure of a flying superhero. I was so happy.

Then she let me choose a new doll. She loved dolls, especially the ones with porcelain heads and fancy dresses. She had a penchant for Madame Alexander dolls and I believe she considered acquiring them a must-have for a young girl. Their features were kind, gentle, and caring—all attributes that I’m sure my mother hoped would be instilled in me.

When our shopping was done, we’d usually go to the basement cafeteria of Meier and Frank and have clam chowder and egg salad sandwiches. When I was older, we’d frequent the Georgian Tea room and have a glass of wine with our meal.

I had my first cup of coffee when I was about 12. It was heavily sedated with cream and sugar. Later I drank it black, like my mother did.

One of my mother’s particularities was that she absolutely would not drink coffee from anything other than a cup and saucer. She rarely would use a mug, and under no circumstances would she touch Styrofoam.

Mother had a collection of china teacups and saucers that graced the dining room cabinet. I have many fond memories of choosing a favorite set and savoring the aroma of a freshly poured cup usually accompanied by a sweet thing. To this day, it is hard for me to drink a cup of coffee without a cracker and piece of cheese, a croissant, or better yet, a slice of pie or cake.

She loathed the sight of a ketchup bottle on the table. And it was only on picnics that paper napkins were ever used.

One wintry day as I was walking home from St. Rose Catholic School, I caught a glimpse out of my left eye of a chubby classmate abreast a hill crafting a snowball. I should have followed my instincts and crossed the street but I did not. Once his snowball was done, he let it loose, and it hit me hard on the forehead.

I still wasn’t too big to sit on my mother’s lap. As she wiped away the tears, she told me not to be offended by the uncivilized acts of uncouth and naughty boys, and then she offered me a Cadbury bar.

That was another of her favorites—chocolate, and the richer the better.

Mother loved the taste of butter and explained to me one day that she was saving my father money. She told me that since she didn’t frequent beauty parlors, in her mind, butter was a much better bargain.

I remember her combing her long black hair and then deftly creating two braids that she would wrap about her head and secure with tortoiseshell chignon hairpins. As she aged, she kept her hair long. While it thinned and became streaked with soft silver strands, I admired that she didn’t chop it off or have a perm but then, in her mind, that probably would have meant sacrificing butter, which she wasn’t about to do.

I spent my elementary and high school years in Catholic schools taught by different orders of nuns. Mother was raised Roman Catholic and there was never any question about how I was to be educated.

My mother was faithful throughout all those years, following my studies, reading my school papers, and encouraging me to be all that I chose to be. When it came time for college, even though I know she was skeptical and sad, she bid me farewell with a warm hug as I left for a large university in Seattle.

My first piano lessons were with a bitter little nun who had bad breath and scared me to death. She’d place her bony hands atop mine and scream at me when I didn’t get a note right.

My mother wanted me to learn to play and found a different teacher who lived near us. I loved Mrs. Booth and her two furry dogs and flourished under her direction.

I would sit and play the piano while my mother would read or knit. Her favorite composer was Chopin, and even though she couldn’t read music, she knew when I’d made a mistake.

She was a consummate reader and loved poetry, particularly Wordsworth. She discovered the American writer Carlos Castaneda before I did when I was in college and introduced me to another novelist, Wallace Stegner.

My mother kept copious journals. Perhaps it was watching her write, seeing the sense of peace to pen your thoughts, observing the careful cursive strokes of her pen or pencil, or smiling over the assortment of colorfully bound blank journals that she so easily filled that prompted my own penchant for journal keeping.

My mother relished trips to the Oregon coast. Those endless stretches of beach would have my mother walking, sometimes singing, and always smiling whether the sun was beating down or a soft drizzle of rain was falling. She’d search for small rocks and shells, feed bread to the seagulls, and stay up late to sit by evening fires where the smell of sand and sea was heady and heavenly.

Years later when I would visit from Virginia with my small children, she’d spend time helping them build sandcastles or test the chilly Pacific Ocean with their tiny toes. My mother so loved the sea as I do now.

Everything about my mother was a class act. She wasn’t flashy or dramatic. She carried herself like the Spanish aristocrat I fashioned her to be—simple, elegant, and with a grace all her own.

Our bathroom always had a different scent because my mother loved soaps. But she refused to use grocery-store brands. She told me that they were harsh and would burn my skin. Instead, whenever we went on our shopping trips, she would buy a box of special soaps. I liked them because the bars were always larger and sculpted, and I never got burned or had red skin with them.

There were a lot of things about my mother that bothered me, and as I was growing up, I knew that I would be different from her.

She never drove a car and never worked outside the home, even though she had been a teacher before she married my father. Her gradual loss of hearing was annoying, and she was always nagging me about standing up straight and wondering if I was happy.

She had no financial sense and no understanding of the business world. She had no interest in politics and couldn’t understand why I wouldn’t wear my skirts longer.

But my appreciation for her catapulted upon the birth of my own daughter. Now, as a mother myself, I could comprehend the awesome responsibility of raising a child and wanting to do it with heart.

I’m a big girl now and have three grown children of my own and four grandbabies. I certainly learned to drive a car and have jobs and, on occasion, balance a checkbook. I understand dying and death and loss.

But whenever I am cuddled up with a freshly sharpened pencil and a crossword puzzle, or hear a prelude by Chopin, or reach to take the ketchup bottle off the table, or add butter to a recipe, or bathe with lavender soap, I remember Mama and wish that she and I could share a cup of coffee together again.