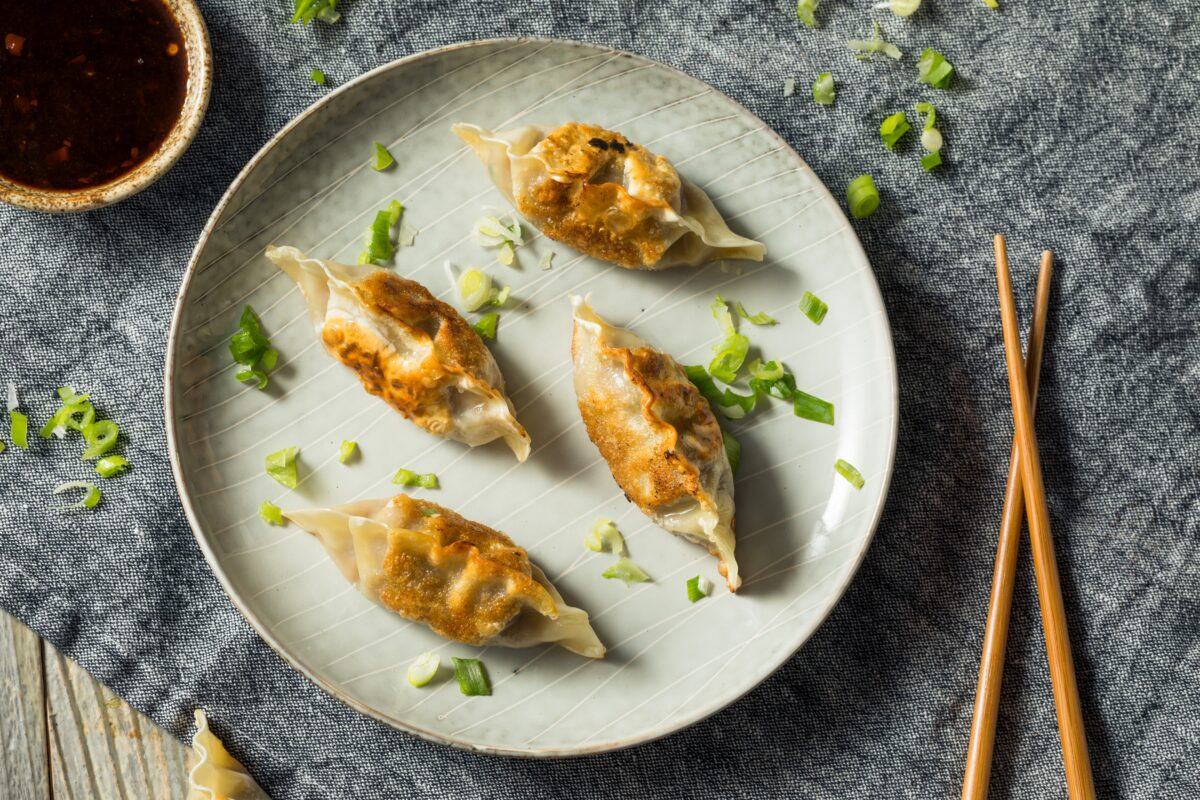 Growing up in a Korean family, making dumplings was a monthly ritual—with a crispy, golden-brown reward
BY Judy Joo TIMEJanuary 22, 2020 PRINT

As a kid, I was a very picky eater. I would go to great lengths to eat only the best part of every food.

Golden crispy skins were carefully peeled off fried chicken, and cupcakes were licked bald. Pizza was stripped of its cheese, for a feast of saucy crusts; the insides of tacos were vigorously shaken out, for a hard-earned meal of grease-laden tortilla shells. Oreos were scraped clean of any frosting, with only the chocolate cookies to be devoured.

When it came to my native Korean food, I was no different. To my parents’ dismay, I squeezed out the insides of kimbap, Korean sushi rolls, and ate only the remaining hollow rings of rice and seaweed. For haemul pajeon, a seafood pancake, I dismissed the normally coveted bits of seafood and smacked on the crisp surrounding dough, riddled with holes like a slice of Swiss cheese after my surgical dissection.

Mandu guk, dumplings in soup, were attacked with chopstick precision: each floating mandu was fished out and torn open, the meaty insides extracted and cast away like lost fishing buoys. Only the thin, slippery white dumpling “skins” won my attention, and I eagerly slurped them up like noodles.

But fried mandu, mandu gui, was by far my favorite. I ripped open these golden deep-fried parcels and chucked the fillings to the side. I again savored only the skins: thin, crispy, seasoned by their juicy—though unwanted—insides.

My mom, “Umma,” subjected my sister and me to a monthly mandu-making mandate. We looked forward to eating those tasty little parcels, but dreaded the laborious process of making them: It entailed painstakingly forming at least a thousand little dumplings by hand, one by one. The process would take hours and overtake the kitchen.

First, Umma mixed the ground meat, a mammoth amount, in the only vessel we had available to undertake such an endeavor—my old yellow plastic baby bathtub. Out would come yellow tubby, and I knew we were making mandu.

I always thought it looked odd, seeing my bright, happy bathtub, the scene of endless hours of rubber ducky fun, filled instead with a five-pound mass of ground meat. But that didn’t seem to bother Umma.

The picture was always the same: Yellow tubby filled with a mountain of ground meat on the kitchen floor; Umma in her blue apron quietly squatting next to it, like a frog observing a lake. A myriad of bowls and bottles of various ingredients standing at attention around her.

Then suddenly, like a conductor leading an orchestra, Umma would begin.

Chopped cabbage, fresh tofu, sweet scallions, and spicy onions would be pitched into the tub, followed by a symphony of seasonings: whole and crushed sesame seeds, soy sauce, roasted sesame oil, black pepper, and salt. It was Umma’s special recipe, a composition of fragrant flavors that slowly, yet steadily built to a crescendo. The sweet scent of scallions played with the zing of black pepper; the pungent smell of garlic mingled with the nutty notes of sesame oil.

My sister and I would watch intently as Umma bore her palms down through the colossal mass, scooping the bulging sides inwards like a pastry chef kneading dough. Little bits of onion, scallions, and sesame seeds stuck to her forearms, which gradually took on an oily, reddish hue. Occasionally, she would look up and rest her tired arms on tubby’s sides, hands hanging, and ask me to push up her glasses.

We listened to the rhythms of the ritual: the scraping of Umma’s nails against the bottom of the tub, the squish-squashing of the meat, and the shuffling of tubby struggling to stay still on our worn linoleum floor.

The symphony ceased only when the meat took on a smooth, paste-like texture. Umma, still squatting, would take a bit of the mixture and roll it between her thumb and forefingers, slowly, thoughtfully. She would peer over her glasses, study its seasoning, and taste a little. She’d look over to us, nod, and flash us a wide smile of satisfaction.

Now, we were on to serious business.

Surrounded by piles of wrappers, deep silver bowls of filling, and an assortment of plates and trays, we would begin the arduous task of stuffing, shaping, and sealing.

Hold wrapper in palm of left hand. Scoop meat into middle of wrapper. Dip finger in water. Paint a wet circle around the wrapper’s edge. Fold in half. Pinch closed. Repeat.

Making the first 10 or so was always fun, but the process would soon grow boring. It was mundane work, and Umma ruled with an iron fist: no one was allowed to escape until the last bit of meat had found its way into a skin.

I was slow and over-handled my dumplings, making them sticky and prone to bursting open. My fingers accumulated a crusty coat of white flour. My palms grew tacky and pasty.

Furthermore, I had no concept of consistency. I had a tendency to either overstuff or starve them, and many—often the obese ones—paraded a patch or two to seal a hole where I had stretched the dough too much.

To prevent repetitive motion syndrome from kicking in, and add a bit of diversity, I’d create mandu of odd shapes and sizes: flying saucers, squares, triangles, and other geometric shapes. Umma didn’t seem to care what they looked like, just as long as they were edible.

She, meanwhile, would effortlessly form hundreds of perfectly shaped and sized dumplings. Her strong, paddle-like hands magically transformed into the nimble and delicate ones of an artist, gently stuffing, shaping, and plumping the mandu like little pillows. She finished each one by crimping the seal into an adorning ruffle.

By the end of the mandu mission, every flat surface of the kitchen would be covered with dumplings, carefully arranged like mosaic tiles. They completely lined the kitchen table, then filled trays and plates that spilled over onto chairs, windowsills, the stove, the TV.

Umma froze the mandu on trays, and then stored them in plastic bags. When it was time to eat them, we played a guessing game: Who made this mandu? Umma’s were always perfect and easy to guess. Mine were labeled “modern mandu.”

There were usually a few wrapper scraps left after all of the meat had been used. I’d beg Umma to fry them up for me as a special treat.

She’d heat a frying pan and drizzle in some oil, swirling it around to form an even shiny coating. Then the mandu skin scraps were dropped in. They sizzled and bubbled up, shrinking and curling like bacon. Umma drained them on paper towels. I would wait for them to cool while watching the oil stains spread, slowly making the paper towel see-through. Finally, I would savor my reward: a crisp, golden-brown, fried mandu skin.

Umma makes mandu mostly alone now. A vast sea separates us. She called the other day, telling me that she had just made a small batch and fried some extra skin scraps in my honor and fed them to my dad. Her laughter echoed on the line and in my head.

I wished I could make dumplings with her and my sister again; we are all so far from each other, and these moments together are so rare. Those arduous mandu-making missions would seem like a leisurely pastime now. I have even learned to eat and enjoy the whole mandu, fillings and all.

Later, I went to my local Korean restaurant and ordered a dish of fried mandu. They came out neatly arranged on a plate, propped up and leaning against each other in an orderly pyramid. I speared one with my chopsticks and contemplated which end I should bite first. I bit off one corner and chewed slowly.

Then almost instinctively, I dropped it to my plate, ripped it open, and pushed the still steaming meat out. I devoured the skin and smiled to myself. It’s still the very best part.