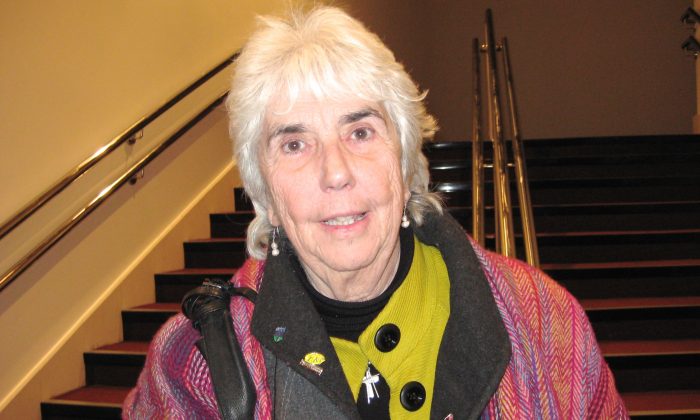 DUBLIN—The Convention Centre Dublin (CCD) was filled with positive reactions to Shen Yun’s final show in Dublin before the company heads to the UK for shows in Birmingham and Manchester.

Shen Yun artists leave Dublin on a high, and the audience showed their appreciation with a standing ovation. One member of the audience was Ms. Maureen O’Sullivan TD (a member of the Irish Parliament) said “It would be good if more people would see it [Shen Yun], I like the principles of Falun Gong, which are Truth and Compassion and Tolerance—we could do with more of that everywhere!”

Ms. O’Sullivan described the show as ‘absolutely wonderful’ and said she really enjoyed the experience of being at Shen Yun, “I’m just delighted to have been there.”

Ms. O’Sullivan said tonight was the first time she has seen Traditional Chinese dance and was in awe of the performance.

“I know the difficulties in China, and I know the persecution, and what goes on in China, so I think that makes the show that much more poignant and interesting, said Ms. O’Sullivan.

Shen Yun currently can not tour in China because of the Chinese Communist Party, commenting on this fact Ms. O’Sullivan said “They’re true to, they’re so loyal to the China that they believe in and that they know, and it’s just very sad that the China of today doesn’t allow them to practise their principles and their beliefs.”

In closing Ms. Sullivan said “I think every country’s dance and music tells similar stories, you know, about inspiration and about people doing good and people having to face evil, and the same stories is there tonight that we would see in our dance also, and the dancing culture of other countries.”

Artist: ‘I was blown over by the displays, the colours, and the vibrancy’

Realist artist Daire Palmer said he was blown over by Shen Yun when he saw the show in Dublin’s Convention Centre on March 27. He said, “I was blown over by the displays, the colours, and the vibrancy of the whole show, and the choreography is really impressive as well.

“The backdrop and costume design surprised me. The whole traditional feel to the show and the way everything was brought together in such a professional format—I found that quite impressive.”

According to their website, Shen Yun Performing Arts uses state-of-the-art graphics technology in their backdrops, creating vividly animated settings to support the dancers on stage.

The costumes surprised Mr. Palmer, they are handmade with new designs for every new season. The Shen Yun website states, “They use bright colours to tailor and recreate hundreds of new pieces each season. Every detail is given meticulous attention and is a result of artistic inspiration and careful polishing.”

During the show Mr. Palmer felt that he was being taken on a journey through China’s 5,000 years of divine culture. He said, “It delivered exactly what it says in the brochure.”

Indeed, the brochure for Shen Yun says, “For 5,000 years, divine culture flourished in the land of China. Humanity’s treasure was nearly lost, but through breathtaking music and dance, Shen Yun is bringing back this glorious culture.”