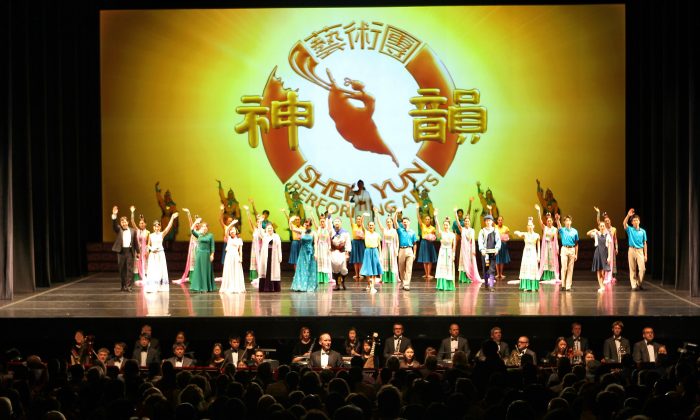 After leaving Australian soil, the New York-based company jets off to Taiwan, Japan and Korea, wrapping up its Asia-Pacific 2015 World Tour in Honolulu.

Shen Yun’s tour in Australia began in the Gold Coast then on to Brisbane, Sydney, Canberra, Adelaide and finally Melbourne, fulfilling a mission the company made in 2006-to revive Chinese traditional culture and values through classical Chinese dance and music.

The Australia tour was well received drawing several packed and full houses along the way.

Shen Yun, ‘You moved me’

Kate Reilly, founder and managing director of the Melbourne School of Classical Dance [MSCD] had a message for the Shen Yun performers.

“Congratulations, you moved me, and that’s big!” she said.

Ms. Reilly gave up a performing career to focus on teaching and pursue her career studying at the Royal Academy of Dance and the Russian Vaganova method of ballet training, regarded as the best ballet training system in the world, according to the melbourneschoolofclassicaldance.com.au website.

She opened her dance academy in 2008 and since then, some of her students have been accepted into The Australian Ballet School and the Victorian College of the Arts Secondary School.

She left the theatre really impressed.

“I enjoyed it even more than I thought I was going to,” she said. “The dancers were so highly trained. I really appreciate the diversity they have, not only their classical ballet skills, but their comprehensive classical Chinese dance with the flips—the stylized Chinese movements. It was amazing.”

Classical Chinese dance is at the heart of what Shen Yun does. “Known for its incredible flips and spins, and its gentle elegance, it is one of the most rigorous and expressive art forms in the world,” according to the Shen Yun website.

Ms. Reilly said coming from a classical dance background herself she could totally appreciate the dedication and discipline from each of the dancers that has gone into such a performance.

She also found herself connected to the spiritual energy interwoven through the entire performance and she now aspires to further explore China’s ancient divinely inspired culture after seeing Shen Yun.

“It was really educational and uplifting. … It sparked my curiosity.”

The sopranos, Tianling Song and Haolan Geng’s performances in bel canto style singing, left her with a feeling she had never felt before.

“For the first time I thought that their performance was so strong that I felt at one with the performers. I can’t really describe it, it was very powerful.”

She was disappointed for the people of China that Shen Yun could not perform there.

“There should be no restrictions in my opinion,” Ms. Reilly said. “It’s first class—so moving, powerful and uplifting.

She paid tribute to the entire Shen Yun team of choreographers, costume designers, and “the person who comes up with the concepts and stories. It’s really a huge team effort, the orchestra, the instruments, it was really brilliant. I appreciate the work that goes into that. Big credit to everybody involved.”

Circus Student: ‘Everything is so sleek’

Mr. Martyn is a contortionist and quite flexible, he said he was inspired to do more acrobatics and to learn classical Chinese dance. He was amazed to see how they made the most difficult dance move look so easy.

“Amazing, everything is so sleek,” he said. “Even during the hardest move, they kept their expression perfect, they just kept characters the whole time and when doing the most impossible … incredible.”

The Shen Yun website explains: “Classical Chinese dance is rich with expressive power. Through expression of bearing and form, beautiful dance movements bring out the inner meaning of intrinsic thoughts and feelings, reflecting the peculiarities of human nature, the standard for human conduct, moral concepts, mental state, one’s value system, and so on.”

NICA is the only training institution of its kind in Australia, fostering passion, creativity and a high level of skill in its graduates who will be recognised as inspiring circus artists, according to its website, www.nica.com.au

Managing director Steve Bevington is one of Australia’s leading experts on housing affordability. He was seeing Shen Yun for the very first time.

“It was tremendous really. I like the holistic picture that’s presented,” he said.

Shen Yun website explains; “Sophisticated dance techniques, an orchestra joining instruments from both the East and West, beautiful costumes, and a stunning back drop—this is Shen Yun at first glance. But digging deeper, one discovers a sea of traditional Chinese culture. Mortals and divine beings merge on stage as one. Principles such as benevolence and justice, propriety and wisdom, respect for the heavens, and divine retribution, all come to life, washing over the audience. Originating from Confucianism, Buddhism, and Taoism, these ideals are the essence of traditional Chinese culture.”

‘I was moved by the music’

He said he did not know much about Chinese tradition however, “it is presented very well. … These stories have to be retained, be alive and be inspiring again.”

He was moved by the Shen Yun Orchestra’s unique blend of Chinese and Western instruments and said he wanted to hear more of it and would come again so that he could listen again.