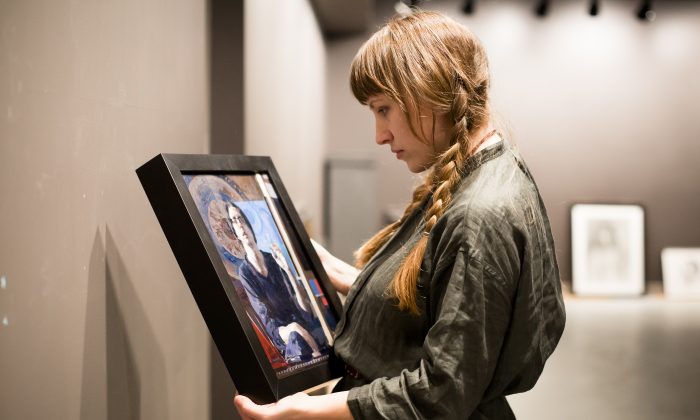 NEW YORK—We see others differently from how they see themselves. Artists’ self-portraits bridge that inevitable gap to some degree—forthrightly only in rare instances. Not only do we see how artists want to be remembered, but also how they are able to project themselves into the world through their technical abilities and through their artistic gifts.

The viewing of a self-portrait is an intimate meeting of gazes of the artist and viewer, separated in time and place. It is qualitatively different from looking at any photograph of the same artist, created in less than a second.

“There is something that pauses you when you look at a self-portrait, a special painting. It really is an introspective work of the artist, deliberately laboring over his or her face for many hours,” said Colleen Barry, an artist and curator of the exhibit “Self Portrait.”

“Nothing would compare to that moment when you look into the eyes that the artist painted at a specific time,” she said.

“Self Portrait” opened at Eleventh Street Arts gallery on April 20 and runs through June 20. It features 28 artists from the United States, South America, and Europe who have trained in the world’s foremost art academies: Lyme Academy College of Fine Arts, The Florence Academy of Art, Grand Central Atelier, the School of Visual Arts, and The Art Students League of New York. Their works range from the more classical or formal to the more naturalistic or realistic. Some works show more overt abstraction, or reveal the painting process.

Eleventh Street Arts gallery is special in that its exhibitions are curated by artists who select works based more on artistic merit than on commercial incentives.

She added, quoting the art historian James Hall, “Self-portraits give privileged access to the sitter’s soul.” Ultimately, Barry’s wish is to celebrate these artists whom she deeply admires.

Self-portraits can be traced at least as far back as the Middle Ages, but “the term self-portrait was coined only in the 19th century (1831 is the first recorded use in English),” wrote Hall in his book “The Self-Portrait: A Cultural History.”

Many painters, especially in the 18th and early 19th centuries, would donate their self-portrait to the Uffizi Gallery Museum in Florence to be displayed in the Vasari Corridor. They saw it as a way to secure their reputations and worldly success, placing them in a line of painters reaching back to Raphael, Hall wrote.

On a much smaller scale but in a similar vein as that tradition, Barry selected some of the most prominent representational artists for the “Self Portrait” exhibition, with hopes of making their presence more known to the world.

It is also a way for them to further forge their identities for posterity. “If you have been given the gift to make paintings, you want to leave a little bit of yourself behind,” Barry said.

Some of their techniques for representing themselves can be traced back to artistic practices of the Renaissance. Continuing that tradition is unusual when compared to the post-modern practices featured in the mainstream art world. So it is not surprising that the exhibit “Self Portrait” is both posing and answering the questions of these artists. “Who are we, and how do we fit in this crazy [fast-paced] world?” Barry said.

From Paint to Life

Rembrandt’s name inevitably comes up when talking to the artists featured at the Eleventh Street Arts gallery. The 17th-century Dutch painter is one of the world’s most recognizable artists, in part because his self-portrait paintings and etchings are so numerous, but more so because of his artistic genius.

Rembrandt is celebrated for how he depicted the expressions of his subjects’ hearts and minds, bringing them to life. To this day, people still gasp when they look at a Rembrandt self-portrait.

“Rembrandt really captures that moment of two humans looking into each other’s eyes. His is just a reflection in oil paint. It is transformative. It is so unbelievable,” said Will St. John, one of the artists in the exhibition.

While working on his self-portrait, St. John turned to Rembrandt for inspiration. For him, two words sum up Rembrandt-inspired portraiture: “sympathy and magnanimity,” he said.

St. John took a classical approach to his self-portrait. “It’s composed, but it’s trying to pretend that it is not composed,” he said.

Edmond Rochat, also an artist featured in the exhibit, took on an almost cinematic approach to his self-portrait. Placed in the center of a square canvas, he seems to emerge from the darkness, moving straight toward the viewer.

“There is something happening in the mind of the artist as they are putting their paint on the canvas. They have an intuitive sense of how the painting ought to be and how it ought not to be. That’s partly guided by this inner sense of the feeling of things and not just by his ability to mechanically recreate his vision. How the artist recreates an internal vision and externalizes it in some way with paint is mysterious to me. I don’t know what to make of that,” Rochat said, smiling.

Some self-portraits may not depict an accurate likeness of the artist. The expression in the painting may turn out completely different from what the artist initially had planned. Artists can either idealize or deglamorize themselves, but the outcome is always a telling reflection of how they want to be seen.

Although artists usually want a likeness to be recognized in their self-portrait, Barry feels that is not the primary goal. “I can try to be as exacting as I can, but sometimes the way a self-portrait manifests itself materially, the mood of the work, has a life of its own,” Barry said.

Jan Lievens’s (1607–1674) portrait of Rembrandt may show an accurate likeness of the Dutch master painter, but putting artistic ability aside, it could never compare to the truth we see in Rembrandt’s numerous self-portraits.

“When you are an artist, you are humble to the gods, to the muses. You are not 100 percent of the time in control, and I like that. … It humbles me and creates an element of surprise,” Barry said.

“Self Portrait” runs until June 20 at Eleventh Street Arts gallery, 46-06 11th St., Long Island City, New York. The exhibit will be on view during the LIC Arts Open on May 18, 6–9 pm and during an Open Studio Weekend on May 20 & 21 at 2–6pm. To view “Self Portrait” by appointment email: Info@eleventhstreetarts.com