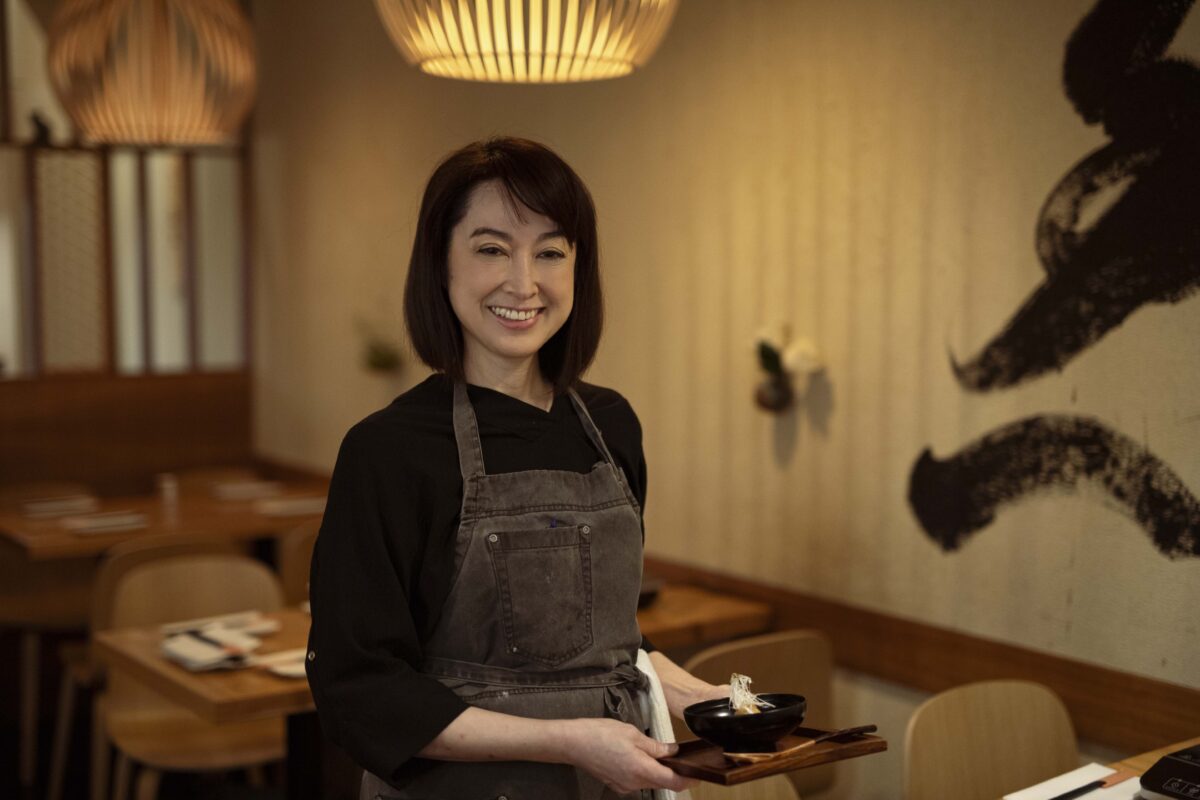 With grit and sensitivity, restaurateur Mie Okuda combines Japanese comfort food with a ‘you are what you eat’ philosophy
BY Annie Wu TIMEMay 12, 2022 PRINT

In an industry known for its high risk of failure and low profit margins, Mie Okuda has survived opening a restaurant during an economic slump—twice. In the late 1990s, during Japan’s “Lost Decades” recession, she started a restaurant in one of the most restaurant-dense cities in the world, Tokyo’s Ginza district. Years later in America, Okuda opened a restaurant in New York, just as the effects of the 2008 financial crisis began to be felt.

The latter happened months after Okuda immigrated to the United States in 2007, and the former was a decisive career change after years of working in architecture and design. Despite the odds, she succeeded in winning over diners each time. Okuda herself isn’t sure how she manages to do it. “I don’t know whether to say it’s good timing or bad timing,” she joked. Her Tokyo restaurant did so well—counting politicians among its patrons and getting frequent television publicity—that within a few short years, a local bank gave her a no-credit loan to expand the eatery to the whole floor. Her New York restaurant Momokawa became popular within two years of opening and has been awarded a Michelin Guide Bib Gourmand title, meaning it’s an establishment with good food at a good value. It is thriving despite a pandemic that has felled many restaurants in the city.

Her entrepreneurial spirit is a testament to her grit: Growing up in a small town in Hokkaido, Japan, she learned about cooking and hospitality from watching her parents run an izakaya (Japanese pub) style restaurant. But when she opened her restaurant in Tokyo, she had no professional culinary background. She had pursued a career in design and had encountered discrimination trying to find work as a single mother raising a biracial son. She eventually found a job at a small firm, but after a few years, she realized that she had to pursue an architecture degree in order to go further with her career. Okuda decided to open a restaurant instead, pouring her life savings into the Tokyo eatery.

But she knew in her heart that she would not stay in Japan; her son, who was half Argentinian, was often bullied in school. She decided to draw up a plan to immigrate to New York. In a city brimming with people of all cultures and backgrounds, she thought her son would no longer feel so alienated. “I wanted to show my son, it’s normal to be different,” she said. Here in America, she has forged her own path to success.

That success comes from placing great care into making dishes that are healthy and made with clean ingredients. She sources non-GMO soy sauce, soybeans, and corn as much as possible; insists on using sea salt and unrefined sugar in her restaurant; buys meat products with no antibiotics; and tells her staff to wash vegetables in a specific manner to ensure pesticides are washed out. Okuda studied nutritional science through an online university from 2011 to 2016, juggling schoolwork and managing the restaurant. It was tough, but Okuda said she wanted to learn how to apply the principles of Eastern holistic medicine to cooking with ingredients found in America.

Since she was a teenager, Okuda was interested in nutrition; as she tended to her mother, who was often sick in the hospital, she wanted to learn more about how to cook healthy meals. “What you eat becomes your cells and tissues,” she explained. “Food creates your body.” When you’re enjoying the food you’re eating, positive messages are entering your body, she said. She wants to eventually pursue a master’s degree so that she can study more about the relationship between food and health. There are studies that show eating good food produces “feel-good” hormones; she would like to further investigate whether those hormones could strengthen the immune system.

Okuda said her approach to cooking is that she will only serve something she’d feed her own children. “Do only the best for the customer,” she said. “That’s our policy.” The name of the restaurant itself captures the desire to offer blessings of good health: “mo” means 100. Okuda explained that “momo” means 100 multiplied by 100—an auspicious number to wish longevity for every diner.

Sauté the square-cut beef steak in butter on high heat. Cook to medium rare. Take the beef out and set aside. Add minced onion to the pan and sauté until brown. Add the beef back to the pan; add red wine and demi-glace sauce.

Steam potatoes for 40 minutes using a steamer. Then, mash them roughly while hot. Add the beef with its sauce and cheese to the potatoes. Shape the mixture into croquette balls.

In a separate bowl, lightly beat an egg and add water. Coat the shaped croquettes with panko first and egg second. Then, add another layer of panko and egg. Deep-fry at 325 F (163 C) for 5 to 6 minutes.