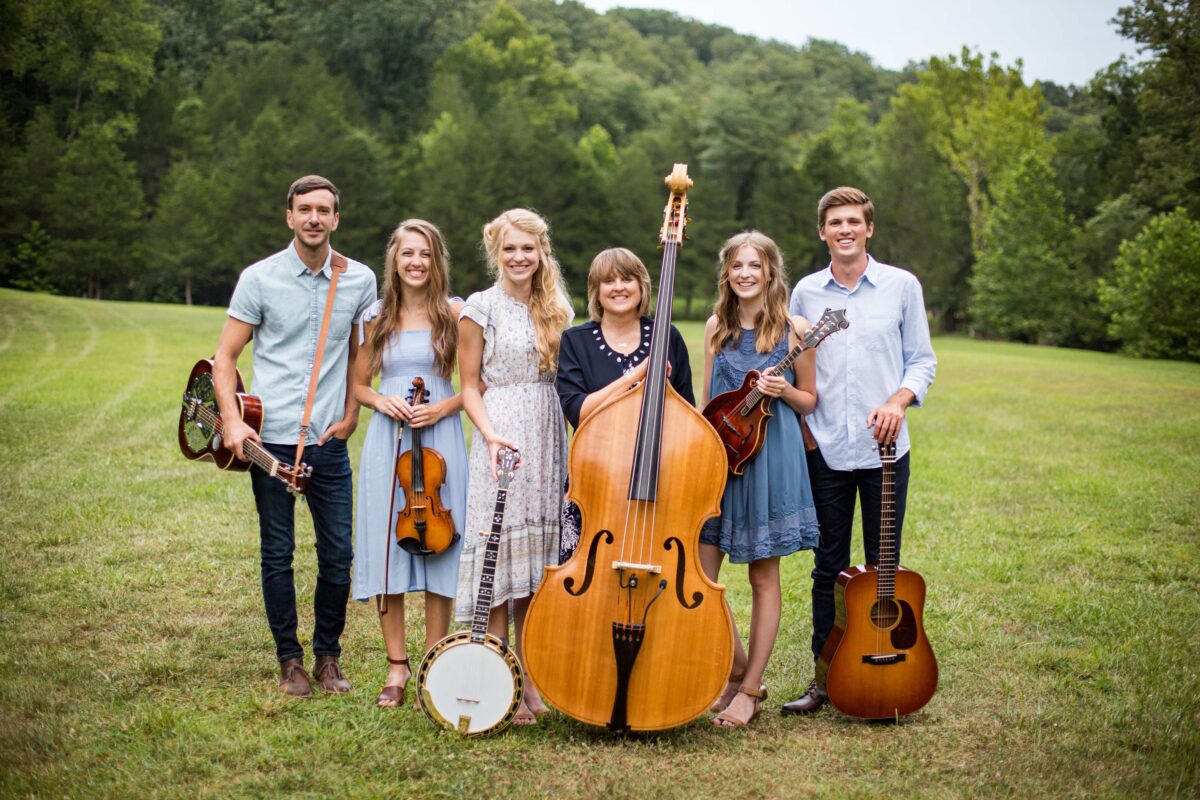 A family band from the Ozarks, The Petersens share their homegrown American Roots music with a global audience
BY J.K. Olson TIMEJuly 13, 2022 PRINT

Jon and Karen Petersen and their four children started out like many family bands, playing for church audiences. “Our dad found the band to be a really great way to share his family and also his faith,” Ellen Petersen Haygood said. “He would take a moment to talk after the show and say why we do what we do, and the importance of serving other people together.”

Today, The Petersens are one of the most popular shows in Branson, Missouri, with a growing following on YouTube, where several videos have more than a million views; their “Take Me Home, Country Roads” video has reached 30 million.

The journey is filled with persistence, a lot of juggling of full schedules, and some “lucky” breaks. The idea for the band came almost 20 years ago, when the family stumbled into their first bluegrass festival while vacationing in Gettysburg. When Jon saw the family atmosphere of the festival—multiple generations of families all hanging out and playing together with no video or TV screen in sight—he decided then and there that they would become a family band.

The oldest, Katie, would play fiddle. She was already taking classical violin lessons and was not happy when her dad signed her up for the festival’s Fiddle Bootcamp. “Most large bluegrass festivals have workshops,” said Ellen. “It’s a great way for the performing bands to make some extra money and the hobby musicians to get some good instruction.”

After her first day of boot camp, Katie changed her tune. “She really, really loved it,” Ellen said. Ellen is the next oldest. She had been playing the drums at the time until Dad said at the festival, “Ellen, you look like a banjo player,” and bought one for her.

Country singer Ricky Skaggs was headlining that year, and Jon was able to talk with him; Ricky’s banjo player, Jim Mills, came over and talked to Ellen. “My dad was impressed at the availability of the biggest stars in the genre and how humbly they interacted with the public.”

Five years after their first performance as a family band at Mom’s home church in Mountain Grove, Missouri, the family won a gospel music “sing off,” and the timing couldn’t have been more perfect. Paul and Ann Bluto, owners of the Branson Imax Complex and the Little Opry Theater, were in the crowd, and they needed an act once a week. The family happily accepted the Blutos’ offer and started learning the ins and outs of performing on a Branson stage. The kids soon found themselves juggling three Imax shows every weekend and playing at local attractions, churches, and community events while continuing their education.

The next big break came in 2015, when Ellen’s banjo and yodeling audition for “American Idol” was highlighted on television. She was cut while selections were made for the top 40, but the experience made her grateful for her upbringing. Contrary to what she witnessed among other contestants, Ellen knew her own happiness and sense of personal worth didn’t depend on advancing on the show.

The down-home music and traditional life values Ellen exuded on “American Idol” resonated with thousands of people across the country, bringing a new wave of fans to Branson to see The Petersens. In May 2017, when Matt, their third child, graduated with a business degree from the College of the Ozarks, the Blutos offered the band prime afternoon time slots during the week and Sundays.

The siblings decided the opportunity was worth the risk. Katie and Ellen dropped their day jobs and The Petersens became a full-time band. “Since we were all single, and had no obligations, we realized it was now or never!”

The Imax crowds were generous with their online reviews, and by the next year, 2018, The Petersens became the No. 1 Show to See in Branson, according to TripAdvisor.

Since 2018, the band has included Katie, Ellen, Matt on guitar, Julianne on mandolin, matriarch Karen (who has a master’s in music education) on the upright bass, and Emmett Franz on the dobro. Emmett is a world-class musician and brings a lot of great ideas to rehearsals. His presence in rehearsals also provides a buffer to potential family drama, and he can be the tiebreaker on a musical choice. Jon is often at the shows when he can break away from work, and he plays piano and guitar with the band as needed, Karen said.

Off-stage, Matt oversees the business side; Katie runs the music arena; and Ellen, who earned her MBA in 2019, is head of marketing. Julianne handles video editing while continuing to balance school and performances. Karen holds the title of band chaplain, and she assists Katie by helping chart out songs for rehearsals and pick out harmony lines. She plays contentedly from the back of the stage while the early musical training she sowed into her children is reaped under the spotlight.

The band also has a steady following on YouTube. “We have somehow attracted just some really good people who like this style of music and how our family presents it. We never dreamed of this opportunity, but it has been really fun to watch it grow,” Ellen said.

The origins of what would become bluegrass music was first heard echoing through England, Scotland, and Ireland. The music brought by the immigrants who settled in the hills and hollers of the Appalachian Mountains did have some outside influences, like the banjo, a contribution traced to Africa, and the Dobro, created and named after Slovakian immigrants, the Dopyera brothers. The music has carried history and heritage for generations.

“One of our favorite things about bluegrass music is that it wasn’t until recently that people actually started recording these songs that everybody has known for a really long time and have been passed down,” Ellen said. “I meet a lot of people today who still have their grandpa’s fiddle.”

Going to bluegrass festivals and local events, the Petersens have gotten to meet a lot of people who have carried on the tradition of music. “It’s really fun to still be playing that style of music, specifically in the Ozarks,” Ellen said. But the family’s music style isn’t typical bluegrass. “We asked a lot of the people who enjoy our music, and they seem to think American Roots captures more of our genre than the bluegrass style does.”

Their style of music brings people home to the Ozarks who have never been there before. “Only 31 percent of our YouTube audience lives in the United States,” Ellen said. “So, the rest of these people live all throughout the world, and I think they really enjoy the American culture aspect of it, just how beautiful the Ozarks are. I think everyone sees pictures of the United States, and it’s like Niagara Falls, or LA, New York City, the Grand Canyon, but the Ozarks are like this hidden gem in the heartland that nobody really has seen unless you’re from this area. It’s been really fun to share our style of music and the scenery of this area through our videos.”

Jon grew up in West Virginia, the grandson of a former coal miner. After Jon’s mother, Mary, got an education, she helped her younger siblings get their education, then moved the family out of coal mining. Jon inherited his mother’s drive. He became a pilot and joined the Air Force, but in the middle of his military career, he felt the Lord calling him into medicine. He completed a residency in family medicine, trained as a flight surgeon for the Special Forces, then did a second residency in preventive medicine.

As the band has gotten older, Jon has taken a step back, which is rare in this business. “My dad built this whole bluegrass band, then, as soon as we were ready to take over any aspect of the band—like leading the rehearsal, and then booking the shows—he just handed it over to us so gracefully. He still travels with us on road shows, and the operator will come up to him and say, ‘Okay, here’s the plan—’ And he’ll say, ‘I’m not in charge here, you have to go talk to my son Matt, he’s the one over there.’”

Jon travels with the band and continues to serve behind the scenes. “When we played at National Harbor in D.C., there was like a 110-degree heat index, and my mom was really struggling. Between every song, he would bring her water out on stage, and replace the cool towel around her neck,” Ellen said.

Serving together continues to help define and motivate the band. “Somehow, the Lord has blessed us and seems to put our family in front of people when they’re going through a lot of hard times. I hear that at almost every show: someone lost their job, or they lost a parent. … People have come with a third ticket that was for their child who passed away, and they did the trip for their kid. I just sit there and cry listening to these stories. I think the Lord somehow introduces this little family in the Ozarks to them during some really dark times. And they just listen to us and can sense a peace. It’s been a huge honor for us to be a part of.”