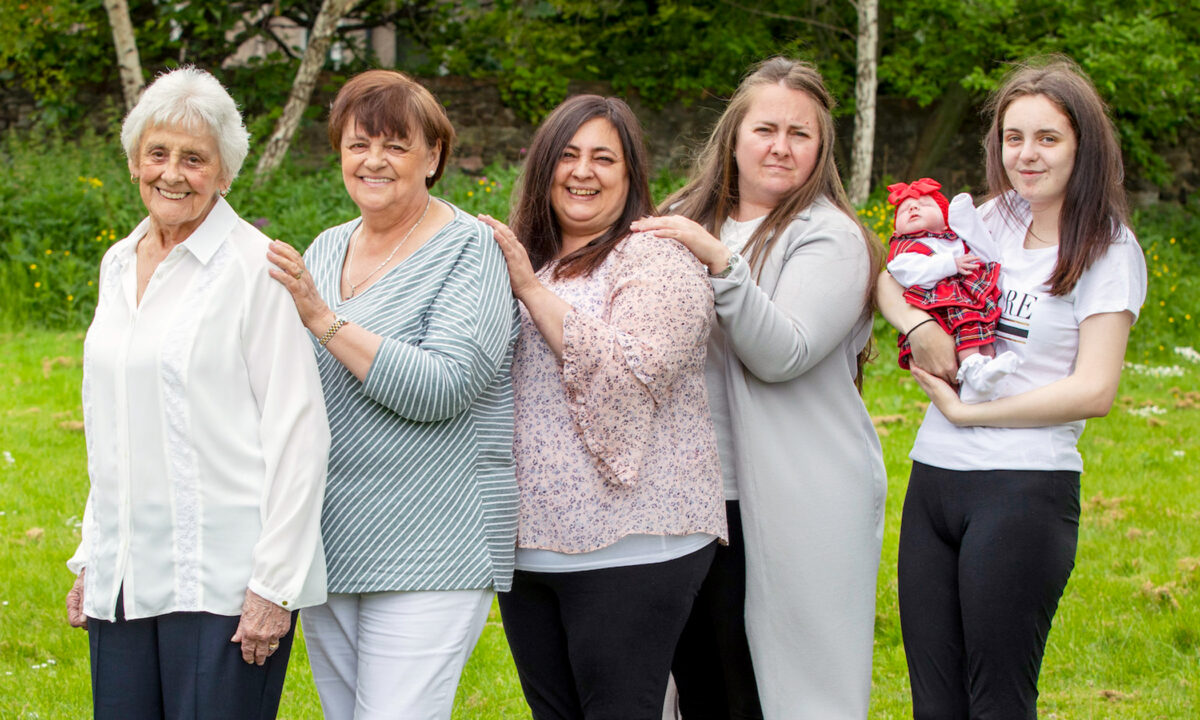 A family has become one of the only in the UK with six generations alive at the same time—with one of the family members becoming Scotland’s only great-great-great-grandma, aged 86.

The family stretches from oldest member Mary Marshall, 86, to their youngest member Nyla Ferguson, who is just a couple of weeks old.

Mother of eight Mary, who was born four years before the start of World War II, boasts a whopping 90 grandchildren.

The women are all on the same side of the family—and all except new mom Toni-Leigh work, or worked, as carers for the National Health Service (NHS).

All gave birth at the age of 18 or younger, resulting in this super-sized happy family, and all live in or around Edinburgh, Scotland.

And on 25 May 2021, Mary earned herself the title of Scotland’s only great-great-great-grandma with the birth of Nyla Ferguson, weighing 6 pounds 14 ounces.

Due to the size of her family, Mary, from Edinburgh, says she is forgiven for not buying each and every member a birthday and Christmas present as she’d spend “half the year doing so.”

“I’m a lucky woman to be honest with you,” Mary said.

“It’s great to have such a big family. There’s always someone there looking out for you. I’m incredibly happy.”

Toni-Leigh, who gave birth to the newest member of the family in May, said: “When we found out I was pregnant we did make a joke about us breaking some sort of record. Then we started looking into it and it doesn’t look like anyone else has our family set-up.

“It’s a bit too early to see a resemblance to her great-great-great-grandma but it was love at first sight when they met! We live no longer than a 10–15-minute drive away from one another so we see each other.

“We haven’t had a big [get together] with the entire family since the pandemic but when we do, it’s great fun. There are 90 grandchildren now with Nyla so it’s always pretty loud!”

Rose said: “It’s great when you have a new baby. I’m one of eight so I’ve always had a big family in some sense. But now we’re pretty big! I haven’t heard of any other family of this size in Scotland.