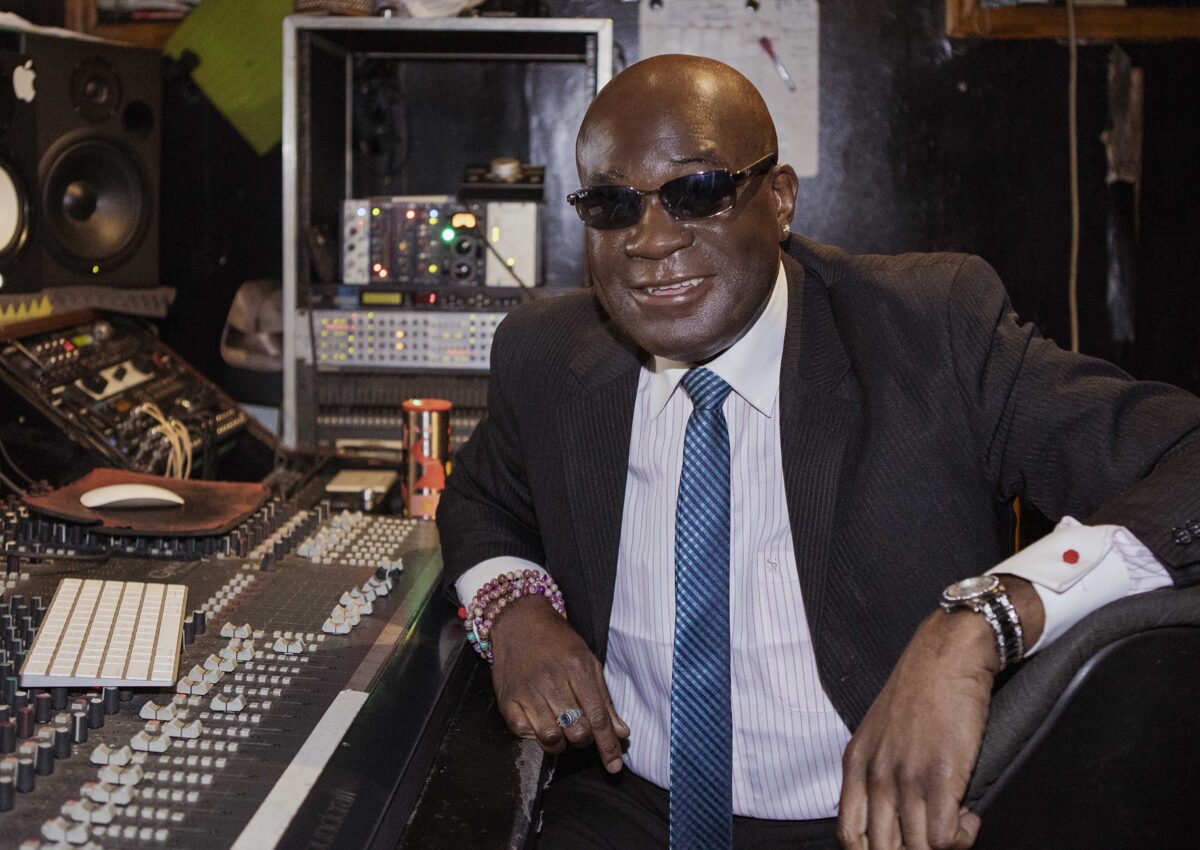 Though he cannot see, Fitzville Martin maneuvers the keyboard and levers on the control panel expertly, quickly assessing what button performs what function.

He was born with retinitis pigmentosa, a degenerative eye disease. As a child, he could still see through his peripheral vision. One time, while riding down the street on his bike, he looked sideways in order to gauge where he was going. But a lady who walked by yelled at him, “Look where you’re going!” assuming that he was carelessly looking sideways.

His parents did not stop him from playing on the streets or doing what other children did. “They let me live. … It wasn’t, ‘Oh you have vision problems, so you can’t go outside,’” he said. Their attitude encouraged Martin to pursue whatever he wanted.

Since he was young, Martin took to music. At around 10 years old and before he immigrated to the United States with his family from Jamaica, he frequently played with his uncle’s band. “Whoever didn’t show up out of his band, I played the instrument,” he said. The drummer often backed out, so Martin became a skilled drummer, often playing at weddings. “I always knew music would be a part of my life,” he said.

Today, Martin, 46, is a notable producer and CEO of Willpower Entertainment, a studio known for working with hip hop and R&B pioneers like Jay Z and Toni Braxton. Nicknamed Funkmaster Flex, he has produced records for many rising talents coming out of Brooklyn’s hip hop industry. He also mentors youth—those with or without disabilities—to learn audio engineering and gain entry into the music industry. “I wanted to achieve a smoother way for them to fend for themselves, a smoother way to adulthood,” he said, noting that many teens growing up in the rough parts of Brooklyn find it hard to stay out of trouble. He wanted to give them opportunities to flourish.

He feels his mission is to help those with vision loss live life to the fullest. “I didn’t have someone like me when I was growing up,” Martin said, to show him that it was possible to chart a path in the music industry. He cited current statistics that roughly 70 percent of blind Americans are without jobs—and he hopes to change this through his nonprofit advocacy, Voices for the Blind. In a way, he thinks people with vision loss are endowed with a special gift: an extraordinary hearing ability, which can be parlayed into successful careers that make use of such skills.

“If you got 20/20 vision, you’re a good sharpshooter. If your ears are what you live off of, music is your thing,” he said. Martin is able to use his hearing to detect modulations in the music he’s producing, or sense when someone is approaching the doorway. He uses his other senses to help him go through daily living without relying on anyone else: putting on his suit, walking down the street, maneuvering around the studio—which he built from scratch in the backyard of his house when he was around 20. He wants to be living proof that blind people can do whatever everyone else can do.

Growing up in Crown Heights, Brooklyn, during the 1980s was a rough time. But because of his vision loss, Martin attended specialized private schools. “I think of it as a blessing, … having a vision problem. I think it saved me from natural trouble.” He recalls the nuns at Catholic school who would put him in his place. “I would be doing my cool Jamaican walk down the hallway, and Sister Mariana would just run up on me, ‘Uh uh. Go to class,’” he fondly remembered.

His parents also instilled a work ethic that placed emphasis on being self-reliant. His mother worked as a cashier at a supermarket. “Instead of spending money on us [siblings], she’ll bring us to go pack bags next to her. She’ll be like, ‘This is my son. You better tip him.’ We’ll come home as a young kid, $100, $200 every weekend,” he recalled. At night, his mother worked at a phone company. She also went to school and took computer classes. She later became a bookkeeper for the supermarket chain.

His cousin and iconic rapper, Special Ed, frequently recorded music in the studio. Martin tagged along and picked up tricks of the trade on his own. “I was just a quiet one, just listening, paying attention to everything,” he said. Back then, there were no blind-accessible tools—such as the text-to-speech functions and special Braille tablets that he uses today while working in the studio or taking notes at Baruch College, where he is working toward a master’s degree in music and politics. “I had to remember what happens when you hit a button.” He taught himself to record, mix, and master music. After building his own studio, he began working with artists, earning $40 an hour. He quickly became a well-regarded name in the industry. But he still wanted to get formal training, and he later obtained an associate’s degree in video arts and technology.

What gives him the most joy is being able to help others reach the same goal. He started Voices for the Blind in 1999 to teach high school graduates life skills and audio engineering. He recently mentored a teen with epilepsy. He wanted to become a DJ but worried that he could suffer an episode while working. Martin encouraged him to get over the mental hurdle, suggesting that he prepare a pre-recorded mix and play it when he senses an incoming episode. Today, he DJs at quinceañera parties and other celebrations. Martin told another teen with a hand disability who was afraid of getting started in the music industry, “Use your mind and get right.” Martin said he realized early on that “you’re only as strong as what can break you.” He encourages the youth he mentors to shoulder on, no matter how difficult things may appear.

Currently, he’s working on making an audio software commonly used in the industry, Ableton Live, become accessible for the blind. He hopes to be able to grow the nonprofit so that he can help at least 20 teens per semester. “When I wanted to give back, … that’s when I really got everything I wanted,” he said, explaining that he feels most fulfilled when he’s able to open doors for others.

He is a state delegate for the American Council for the Blind, acting as a conduit between local government and the blind community. He attends conferences on innovations that benefit the blind and advocates for legislation that benefits the visually impaired. During the pandemic, the organization helped blind people get groceries and essential goods. The next step for Martin is to attend law school, so he can further advocate for the blind community. He can’t wait for the day to come; he developed a curiosity for this field when he was young. “You got to go through what you go through in life. Just be strong and keep pushing,” he said.