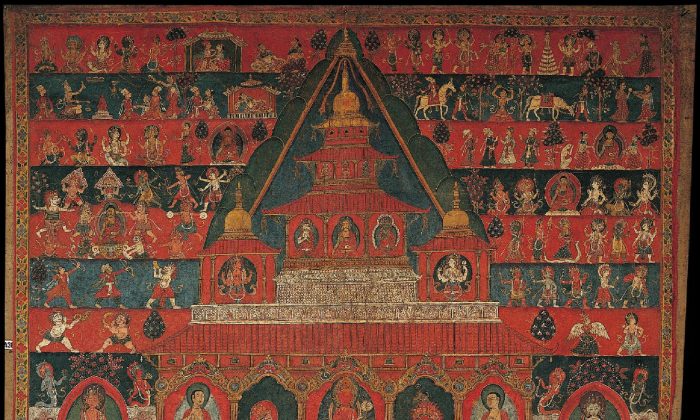 Throughout much of Asia—and over the course of several centuries—the Newars of the Kathmandu Valley have been held in the highest regard for their artistic prowess and sought after by wealthy patrons of various national, ethnic, and religious backgrounds.

This paubha (Newar for “scroll painting”) dated to 1850 reveals a lot of what made the Chitrakar painting-clan of the Newars unique and cause for celebration.

Upon first glance, the eyes are bombarded by red pigment and an active surface, with figures of both mortals and divinities spreading across the cloth in a controlled, structured composition.

Newar painters used red pigment extensively in their work, often from ground cinnabar. This vibrant hue, a sacred color throughout much of Nepal, reflects the power associated with blood, thus symbolizing life. The detailed filling up of space (and a relatively flat space at that) has also been a commonly employed visual tool of Newar artists for centuries.

The complexities and mysteries of this paubha unfold in waves. Like most traditional art from Nepal and the Himalayan region, this piece was not made solely for the purpose of artistic self-expression, but rather was commissioned with the objective of accruing spiritual merit.

Having been commissioned in the mid-19th century, this paubha falls within the reign of the Shah dynasty, the last monarchy to rule Nepal, right up until 2008. This community of patrons can be seen in the horizontal bands that stretch across the painting’s lower section, bisected by a vertical column of deities; male donors on the viewer’s left, females (and a Newar Buddhist priest) on the right.

Each one of these figures is given an individual identity through distinct clothing, facial features, and not least of all, inscriptions.
The aforementioned column of deities guides you upward to the heart of the painting, the standing figure of Rato Machhendranath.

In keeping with the religious syncretism of the Kathmandu Valley, this divinity is practiced by both Hindu and Buddhist followers and is worshipped as a provider of rain. In this painting, Rato Machhendranath is housed in a temple featuring characteristics typical of Newar architecture, such as the multi-tiered structure, intricately carved wooden arches above windows and doorways (torana), bells hanging from upturned temple eaves, and the golden hemispherical stupa mounds.

Perhaps the temple in the painting is so evocative of Newar architecture because it is based on one of the two temples in the Kathmandu Valley constructed for Rato Machhendranath.

The narrative horizontal registers that fill the top half of the painting tell the story of the Buddha and the former prince is seen in several vignettes alongside powerful Hindu gods. This combination of imagery and iconography from both Hindu and Buddhist traditions is not at all uncommon in Nepal and is, in fact, a regular facet of Newar art and religious culture.

This paubha possesses a floral border characteristic of many Newar paintings. However, this floral border does not extend to the bottom of the canvas and one will see an uneven bottom edge, as well as damage in the lower left corner. This appears to be the result of water damage, not an unlikely possibility for a land in which monsoon moisture takes hold for approximately three months every year. Thus, one could conclude this painting had been larger and the bottom-most section has been removed due to severe damage.

This paubha also contains some pleasant surprises. Amongst the crowd of female patrons are several small children, presumably daughters of the depicted women. In the top row of these female patrons, we find a young girl distinct from all other figures in the painting.

Her gesture is one that cannot be misinterpreted. Whereas the other patrons are depicted with hands clasped together in a mudra of reverence and devotion, this girl holds a flower out towards the center of the painting, an offering to Rato Machhendranath and his divine entourage. And in this one small and simple detail, all of the power, purpose, and magic of this art form is captured: an offering to divine energies made with innocence, belief, and purity of heart.

Adam Swart first became involved with Nepal as a Peace Corps Volunteer in 2001. He has worked at the Rubin Museum and has taught Himalayan Art at The New School.