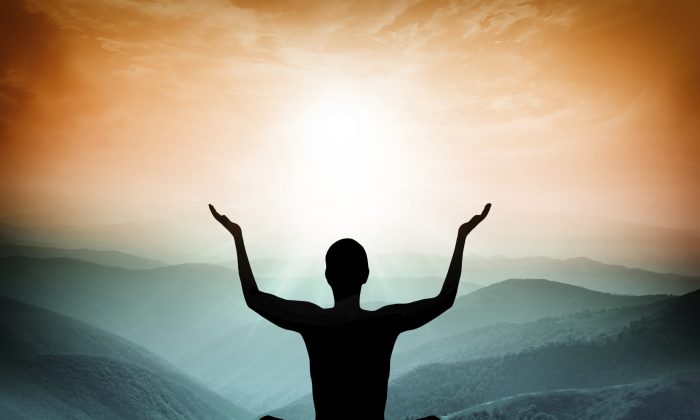 Brain waves vibrate at different frequencies according to different states of mental alertness. Research has shown that at “Aha! moments” the brain is emitting Gamma waves.

We discussed this research and the various other frequencies of vibration in the article “Gamma Waves and Inspiration.” Now we’ll take a closer look at how meditation could help produce off-the-chart Gamma waves, and thus, perhaps, off-the-chart “Aha! moments.”

The general consensus of the benefits or reason for meditating is to “quiet the mind,” which leads to a de-stressing of the body. It’s interesting to note that, while many people report the generally relaxing effects of meditating on a consistent basis, some practitioners report transcendental states in which they experience deeply profound insights of a “spiritual” nature.

These experiences are currently not easily assimilated in terms of how traditional scientific minds tend to view measurable reality. However, it seems important to put these “transcendental states” into the context of what we currently can measure.

It seems important to put these ‘transcendental states’ into the context of what we currently can measure.

In 2004, the Proceedings of the National Academy of Sciences published a paper outlining the electroencephalogram (EEG) states of long-term meditators during their meditative practices. The conclusions of the study were as follows: “The ratio of gamma-band activity (25–42 hertz, Hz) … is initially higher in the resting baseline before meditation for the practitioners than the controls … This difference increases sharply during meditation over most of the scalp electrodes and remains higher than the initial baseline.”

In 2010, in the journal Cognitive Processes, a paper was published studying the EEG readings during long-term “Vipassana” meditators vs. non-meditators. The results were as follows: “Relative increase in frontal theta (4–8 Hz) power was observed during meditation, as well as significantly increased parieto-occipital gamma (35–45 Hz) power. … The findings suggest that long-term Vipassana meditation contributes to increased occipital gamma power related to long-term meditational expertise and enhanced sensory awareness.”

In 2004, neuroscientist Dr. Richard Davidson studied the EEG waves emitted by Tibetan meditating monks and found some of the monks produced Gamma wave activity more powerful and of higher amplitude than any documented case in history.

Some of the monks produced Gamma wave activity more powerful and of higher amplitude than any documented case in history.

In 2008, Dr. Davidson conducted another study with Buddhist monk Matthieu Ricard nicknamed “The Happiest Man in the World.” The EEG waves that Richard produced were considered to be literally “off the charts” in terms of significant strength.

The numerous physiological and neurological benefits of deep sleep have been extensively reviewed. The general physical mechanics of meditation (measured by the EEG state and rhythm of breathing) appear similar to those of sleep. They also appear to provide similar benefits.

The key difference between meditation and sleep is that in meditation a person can consciously influence the intent of the brain/mind whereas in sleep … it just goes crazy! (Just kidding … it goes wherever it goes.)

Another intriguing aspect of meditation is its effects on neuroplasticity. This refers to the ability of people to literally change the physical structure of their brains.

We’ve outlined in “Gamma Waves and Inspiration” how Gamma waves correlate with new neuronal connections. Here we’ve discussed how Gamma waves are created in abundance for long-term meditation practitioners. it should come as no surprise that this practice has positive emotional benefits.

It shouldn’t be a surprise that “The Happiest Man in the World” is a long-time, dedicated meditator.

When people tend to think of a natural “happiness” chemical inside the body, they’re generally familiar with the term “dopamine.” In the brain, dopamine functions as a neurotransmitter ( it transmits signals from one neuron to another neuron). Logic tells us that the “Happiest Man in the World,” who generates sky high Gamma waves creating massive new neuronal connections, is most likely simultaneously generating sky-high dopamine surges.

But what about the transcendental experiences these long-time meditators seem to have?

The Gamma bursts of insights in the “Aha! moments” occurred at about 40 Hz.

Just because we can quantify those moments by utilizing “real-world” examples of insights based on scientific testing, it doesn’t necessarily equate to the Buddhist monk’s experience at 80 or even 200 Hz as being “unreal.”

There has to be a consistency in terms of hypothesis and analysis. Perhaps modern science lacks the wide lens and deep-scope framework needed to assimilate these experiences into potentially a “greater” reality of truths? Or perhaps it’s simply a lack of advanced equipment that would allow us to peer into the world of higher-level Gamma waves?

This article was originally published on Q4lt.com