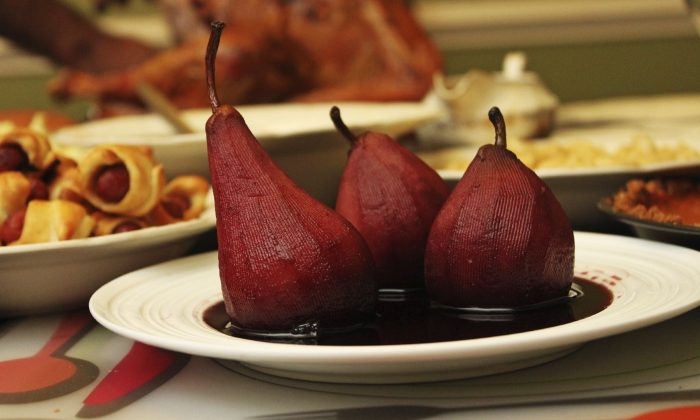 Fourteenth century cooking in England was either very basic or fit for kings and queens and could be compared to anything France had to offer. In “Miller’s Tale,” circa 1386, Chaucer is quoted as stating: “She was wel more blissful on to see/Than is the newe perjente tree.”

The pear-jenet was a type of early-ripening pear perfect for baking. Because of the rather mild English climate there were many fruits, berries, herbs, and vegetables available in gardens. There were, however no olives groves for making olive oil or vines for wine-making. That was resolved by using butter, suet, or lard in cookery, and by brewing ale and importing wines and sherry from Italy. In fact, chroniclers tell us that the 14th century court of Richard 11 had as many as 300 chefs who were able to serve exotic delicacies to as many as10,000 guests a day.

Below are three recipes adapted from recipes translated from Old English by food writer and cookbook author Lorna J. Sass.

Kneaded butter (beurre manie) made with 3 tbsp soft butter and 3 tbsp flour, rubbed together and formed into little balls

Wash leeks and slice into rings, discarding roots and tough green tops. Saute in 3 tbsp butter until soft. Add mushrooms and stir to coat with the butter. Mix broth, saffron, ginger, and sugar and add to leek and mushroom mixture. Cover and simmer for a few minutes, then add the kneaded butter and stir briskly over low heat until thickened. Add salt and pepper to taste.

This was a snack to eat before bedtime or simply a light meal made with any combination of dried herbs available, such as fennel, parsley, sage, mint, vervain, or rue.

Take a bowl and put herbs in, then add hot milk and steep for half an hour. Strain, and discard herbs. Beat eggs, add milk and beat. Add salt. Melt butter in a casserole dish suitable for the oven and add egg mixture and bake in a preheated 325º F. oven for half an hour or until eggs are set. Enough for 3 or 4.

Peel and core pears and cut in half. Cook in red wine or water for about 15 minutes with cover on. Drain when soft but not mushy. Combine sugar, ginger, and muscatel or sherry. Bring to a boil and cook until reduced and thickened. Pour over pears and serve warm or cold with garnish of pomegranate seeds.