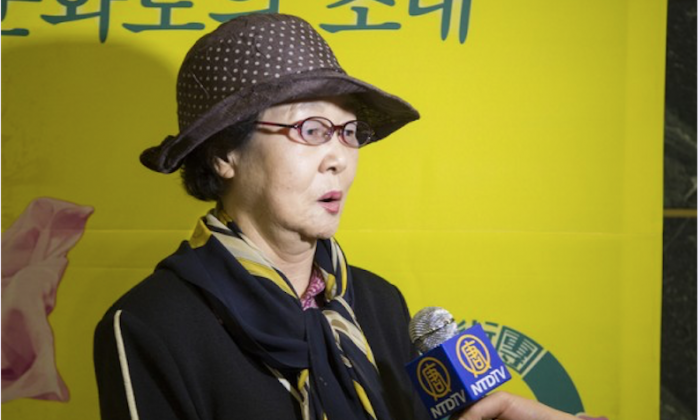 ULSAN, South Korea—Shen Yun Performing Arts World Company wrapped up its three-show run at the Ulsan Culture and Art Center on the evening of May 4, 2016, with rave reviews about its classical Chinese dance. Audience members found it touching, educational, and enjoyable.

Ms. Choe felt truly inspired by the spectacular show featuring 5,000 years of traditional Chinese culture. “The artistic value of this show is far higher than I expected. It’s amazing,” she said. “Shen Yun’s performance here has set a good example for us. It can give rise to artistic development in Ulsan.”

Seeing Shen Yun performance for the first time, Ms. Choe marveled at dances performed by the very well-trained dancers. “I felt an overwhelming amount of positive energy from them,” she said.

Ms. Choe spoke highly of Shen Yun’s costumes. “They are so unique and exquisite. I believe it must have taken a lot of effort to create them,” she said.

“Shen Yun’s costume artists collect countless designs of traditional attire, ranging from those of emperors, ministers, and generals to the everyday clothing of the common people,” states Shen Yun official Website. “Every detail is given meticulous attention and is a result of artistic inspiration and careful polishing.”

It wasn’t just the costumes, Ms. Choe admired Shen Yun’s overall presentation. “From the production of the costumes and the skillful dances on the stage to the digital animation on the backdrop as well as the emcees’ eloquent and detailed introduction of the program, everything was beautifully presented,” she noted.

By the end of the performance, Ms. Choe felt cheerful and refreshed. “I can feel that the stories presented in the programs are based on the idea of compassion. The stories changed my view on life. I may look at things differently from now on,” she said.

With reporting by Billy Shyu