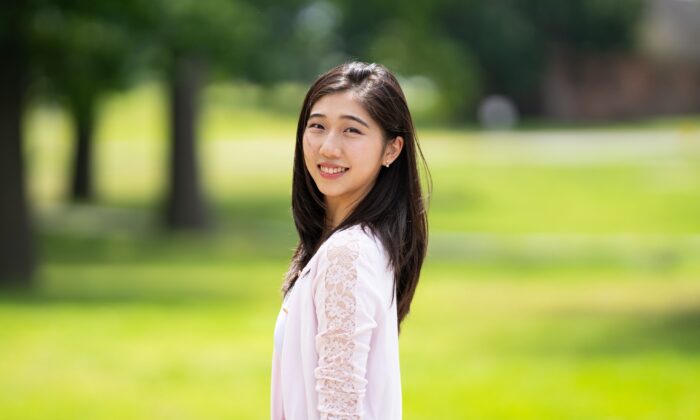 Meaning in Every Movement: Conveying Emotions and Timeless Virtues Through Dance

Coming from a family of artists, Marilyn Yang was exposed to classical Chinese art forms from an early age. Her two brothers were dancers and her mother was a bel canto singer, all at Shen Yun Performing Arts, the world’s premier classical Chinese performing arts company.

It was almost inevitable that Yang, 19, would one day follow in their footsteps. But it wasn’t until she began her professional training in classical Chinese dance in 2014, at the Fei Tian Academy of the Arts in upstate New York, that she began to understand how much it would take to become a true artist. Not only was the rigorous training physically trying, but learning how to express emotion through body movement was also challenging.

One of the techniques she learned, which translated from Chinese, means “body leading the hands, hips leading the legs,” allowed her to improve technically and better understand how to convey the inner meaning of each movement. The skill has been passed down through the ages, but was nearly lost during the Cultural Revolution, when the communist regime in China sought to eradicate traditional arts and culture. It involves using one’s entire body to fully draw out a movement.

“Once you master it, it really makes your moves very clean and big,” said Yang, who is now a Shen Yun dancer herself. “And the expression, the way you can express yourself through your dance is a lot more powerful… your emotions and feelings are able to come out a lot more clearer to the audience.”

She learned, for example, that for a female dancer, the core area should be the upper chest. “All your emotions come from here, like if you want to show [that you’re] shy or happy, it always comes from this one point.”

For this year’s NTD International Classical Chinese Dance Competition, Yang will be performing a piece she choreographed herself, for the first time. Having previously won gold in the junior division in 2018, she decided to challenge herself this time around, when she’ll be entering the adult division.

She will be portraying a figure from Chinese history, Wang Zhaojun, considered one of ancient China’s four renowned beauties. For Yang, who grew up in Canada, it was also a rewarding experience to learn about her Chinese heritage through dance. “I like studying Chinese history to really learn about all those heroes and their stories,” she said.

Wang is remembered for sacrificing herself for the sake of her country. During the Han dynasty, warring Xiongnu tribes to the north of China posed a threat to the empire’s stability. To establish friendly ties with one of the chieftains, the emperor sent off Wang, a palace maiden, to enter into a political marriage.

In Chinese literature and art, Wang is portrayed as a sorrowful character who had to spend her life withering away in a foreign land. Yang wanted to turn that stereotype on its head. She wanted to show that Wang exemplified great magnanimity and selflessness in order to accept her fate and not become bitter.

“I wanted to portray the side of her that people don’t usually recognize,” Yang said. “She’s willing to do what is right for her country. She knows heaven’s will, the divine will. She won’t drown in her own sorrows. She’ll keep looking forward, and she’ll continue her life in the best way possible.”

Yang hopes that she can convey those positive moral lessons through her artistry. It’s what she finds most rewarding about classical Chinese dance.

The competition will be held at the Sugar Loaf Performing Arts Center in New York state and will feature over 100 contestants from all around the world.