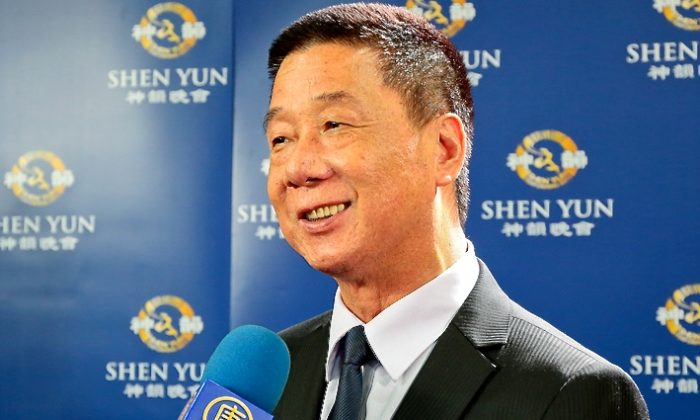 KAOHSIUNG, Taiwan—Mayor of Taitung Chang Kuo-Chou brought over 100 Shen Yun fans and traveled hours to watch Shen Yun’s last performance in Kaohsiung. Chang said that in the past three days, there have been over 800 people from Taitung who came to Kaohsiung to see Shen Yun. “This is the most fantastic and brilliant performance I have seen in my life! Totally breathtaking!” Mr. Chang said after the performance.

Mr. Chang was surprised to find out that he was re-energized after watching Shen Yun, “It’s unbelievable. I left home early this morning and was really tired when I got here. I don’t feel fatigue at all now.”

Mr. Chang brought 25 middle school students to learn more about the Chinese culture, “To pass it down to the next generation.” “What’s more important is that Shen Yun guides people to be kind to others. The performance is inspirational and soul-cleansing.”

Mr. Chang believed that the positive messages from Shen Yun’s stories can change to society and make it a better and warmer place. “The story in The Power of Compassion tells us evildoers will always be punished and that we must be kind to others. I really admire and respect the Falun Gong practitioners in the story. They never stop being kind even to those who hurt them.”

Mr. Chang repeatedly stressed that he would like to invite Shen Yun to perform in Taitung, “I definitely will encourage our citizens to come to see Shen Yun in Kaohsiung but what I really want is that Shen Yun can come to Taitung.” “It’s such an outstanding performance that is hard to come by,” Mr. Chang said.

‘I finally understand our past’

Former Kaohsiung County magistrate Yang Chiu-Hsing “I watch Shen Yun almost every year and I still feel very emotional after each performance. The programs are just fantastic. They showed the essence of art in Chinese culture.” Yang was very glad that Shen Yun tours the world every year, “It’s encouraging and admirable that Shen Yun let the world sees the beauty of authentic Chinese culture and know that ancient China being a nation with rich and deep roots.”

Mr. Yang showed his appreciation for Shen Yun’s effort in promoting Chinese culture to the world.

“Art is the spirit of a nation and the essence of the culture. Shen Yun puts in so much effort (to restore the authentic Chinese culture) and contributed so much to the nation. I am very touched and appreciate it.”

Musician Creates a Song to Honor Shen Yun on the Spot

Professor Li has been in the music circle for over 70 years, and has composed over 1,000 songs and was once the conductor of a grand singing assembly participated by some 10,000 people in Taiwan.

After seeing the show, he said, “It’s beyond my expectation!”

“I’d like to use my reputation, my experience in teaching over 100,000 students and my academic achievements to guarantee that this performance is something that no any other companies, including those in China and other countries, can reach such a high level.

“With extraordinary techniques, historic meanings and righteous connotations, its artistic values are second to none in the world.”

Amazed by Shen Yun’s performance, he said, “In terms of skills, Shen Yun is the best in the world. Its dances are in great unison. It’s not something that can be achieved in just one or two years. Some may not reach that level though spending all their lifetime practicing for it.”

He said, “The show let us understand some things from ancient times to modern days. As an old saying goes, we can learn new things by reviewing old ones. If we don’t know our past, we may not be able to really create something good for the future.”

He created a song on the spot to praise Shen Yun’s magnificence as follows:

Shen Yun’s dances are extraordinarily superb,
which can be regarded as the best in the world.
Dancers are equipped with the best skills
to exquisitely portray our culture and history,
Demonstrating Chinese people’s great benevolence,
their objective is to create a harmonious world.
As Shen Yun is really very inspiring,
it’s great to see the show in this auspicious beginning of the year.

‘Most creative product I’ve ever seen’

“Shen Yun has the best orchestra and is the most creative product I’ve ever seen.” Mr. Han, a 87-year-old music instructor, said with tears in his eyes after seeing Shen Yun Performing Arts New York Company perform at Kaohsiung Cultural Center on March 9.

Mr. Han is currently an instructor of the orchestra club at Tzu Chi College of Technology and the head of the Tzu Chi Choir.

It’s excellent, he said with tears in his eyes, he was very moved. “It’s really hard to describe. It’s so beautiful that no word can describe it. It’s just great—They are really beautiful. It’s really inspiring.”

Mr. Han felt fascinated from the beginning of the performance, saying, “[When the curtain opened,] I was very excited, very excited …. It’s just breathtaking! I was really moved when seeing the show.”

Han has been devoted to music for a whole life. Talking about Shen Yun Symphony Orchestra, he said, “It is really amazing. When the symphony orchestra plays, [I find] the orchestration and the arrangement are extremely good …. I never heard such music when I went to concerts before.”

“I attended the Music Conservatory when I was 16 years old. Now I’m 87 years old. I’ve been working for music since then. This is the best [performance] I’ve ever seen. Shen Yun has the best orchestra and is the most creative product I’ve ever seen.”

“The erhu performance is also very good. The emotion and the rhythm are fully represented. Even just the way the conductor of the Symphony Orchestra started to conduct impressed me very much.—It is the best!” he said.

As the consultant of the Navy band of the Republic of China, Han stresses that even art performances in other countries are incomparable to Shen Yun performance. “I’ve visited The United States, the Philippines, Japan, etc, and led the orchestras of 7 or 8 countries to perform together. But I’ve not seen something like this (Shen Yun). It’s very good, really excellent!”