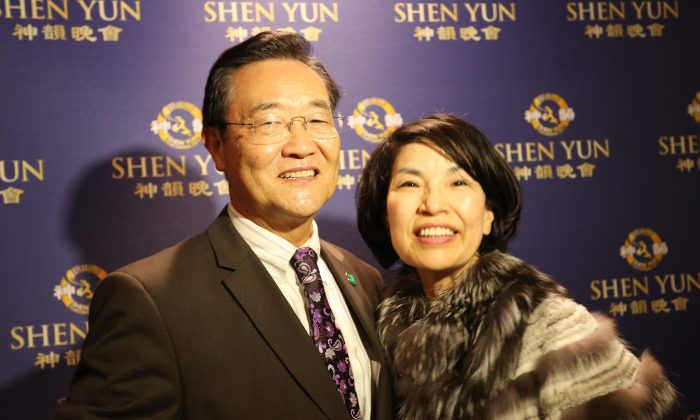 Steven Choi, the former mayor of Irvine who retained his California Assembly seat in 2020, was delighted to see Shen Yun Performing Arts at the Segerstrom Center for the Arts in Costa Mesa, Calif., on Feb. 1, 2015. (The Epoch Times)

COSTA MESA, Calif.—Steven Choi, mayor of Irvine since 2012, has seen advertisements for Shen Yun for years, but never found the chance to attend.

This year, not only was he able to buy tickets, but he was also invited to go with friends, and he was delighted to see the performance with them at the Segerstrom Center for the Arts on Sunday evening, Feb. 1.

New York-based Shen Yun was formed in 2006 with a mission to bring 5,000 years of true, divinely-inspired Chinese civilization to life through music and dance.

“Their perfect performance is very, very impressive,” said Mr. Choi. “Their hard work is paying off to entertain so many people. We appreciate it.”

Mr. Choi said the dancers’ skills were just “perfection,” and he was amazed at the difficult athletic abilities that are inherent to classical Chinese dance, such as flips and jumps.

“I am learning that is a very basic style of Chinese dance,” he said. “So it’s not only dance skills, but their agility is required. I’m impressed.”

Mr. Choi enjoyed the interactive animated background as well, which allows the performers to appear to fly into the air and perform other superhuman feats from ancient Chinese legends.

The original music pieces performed by Shen Yun’s live orchestra were also impressive to Mr. Choi. He appreciated the bilingual hosts who stepped in to introduce each performance, saying it helped him better understand the story behind each dance piece.

Mr. Choi said he enjoyed the performance and would encourage everyone to come and see Shen Yun.

“I think it has value for people to see it everywhere,” he said.