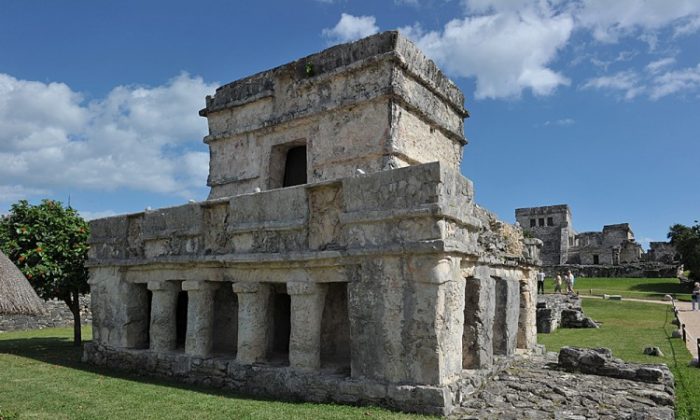 Hundreds of people gathered at the Kukulkan Pyramid, in Chichen Itza, Yucatan, southeastern Mexico, during the spring equinox celebration 2005. The steps of the pyramid throw the shadow of a snake onto the side wall of the staircases. (LUIS BARRERA/AFP/Getty Images)
Arts & Culture

Another interesting complex is Fort Tulum, on the eastern coast of the Yucatan Peninsula. During the time of the Mayan civilization’s decline, several tribes moved to the coast and built Fort Tulum to protect inhabitants from attacks of fellow tribes.

“All those grey stones were once colored in bright colors. Different colors symbolized different nature powers: heaven, earth, moon, sun, fire, and so on,” Novoselsky said.

Mayan life is described in a sacred book called “Popol Vuh.” Novoselsky said it could be compared to the Bible, “but all information is in allegoric form.” “There are some interpretations, but I think they are all far from the truth,” he said.

All commentaries were either destroyed or written with the hieroglyphic script, which is difficult to read. “Most secrets are still hidden. One of the most popular interpretations is the prophecy about the end of the days in 2012,” Novoselsky said.

As to whether he believes in this prophecy, Novoselsky said, “As a scientist, I investigated this question.”

He mentioned the well-known esoteric researcher Drunvalo Melchisedek, who had discussed this question with Guatemalan priests and found out that the predicted transformation would be a process that would happen gradually—not in two days, but during 200 years.

“In their opinion, the year 2012 is a milestone of the old epoch and the beginning of something new, maybe the beginning of a new culture. And they emphasized that this would happen slowly and gradually without cataclysms and earthquakes,” Novoselsky said. “People living in the center of the Mayan civilization haven’t any panic about this prophecy.”

He added, “In my opinion, all these prophecies are a chance to think about our behavior, the meaning of life, about how to improve yourself and other people’s life, and how to live in harmony.”

Two adjacent reefs form Cozumel Island in the Caribbean Sea, making it the second-largest reef in the world, according to geologists.

“This island is also sacred,” Novoselsky said. “There was a temple of the goddess Ixchel, who is the goddess of midwifery and medicine. Even nowadays, a lot of people come here to treat infertility.”

The inhabitants of Cozumel Island have never experienced wars or battles or any significant crime.

Novoselsky, who is also a member and correspondent of the Nicolas Roerich Museum in New York, was surprised to find that people on Cozumel Island are familiar with a symbol created by the Russian artist and philosopher Nicolas Roerich.

In the island’s local museum, all the guides wear badges with Roerich’s “Banner of Peace,” which consists of a circle containing three circles, symbolizing past, present, and future united by eternity. The symbol can also be interpreted as religion, knowledge, and art within the circle of culture.

Novoselsky said that the museum’s guides didn’t know who invented it. Famous Mexican actress Alicia Rodriguez, who is involved in the movement Roerich Pact, introduced it to the locals during her visit in 2009.

“I told them that it was created by the Russian artist Nicolas Roerich, and they promised to include this information in the excursion program,” Novoselsky said.

Yuriy Knorozov (1922–1999) is one of the few scientists who were able to contribute significantly to the decipherment of ancient Mayan script. Without visiting Mexico, just by using pictures, books, and articles of other authors, he was able to create a method that helped researchers read many Mayan inscriptions.

Near the end of his life, after perestroika, when Soviet citizens were allowed to go abroad, he finally visited Mexico. “He was received with full honors because people knew about his works. Many American and Mexican scientists who researched Mayan [civilization] made references to Knorozov’s works,” Novoselsky said.

A research center, with his students living there, is in contact with local inhabitants and continues to work on the decipherment of the Mayan hieroglyphic script to further discover Mayan secrets. “Maybe we’ll find their answers about the earth’s future,” he said.

This is the second of a two-part series. Find here part I.