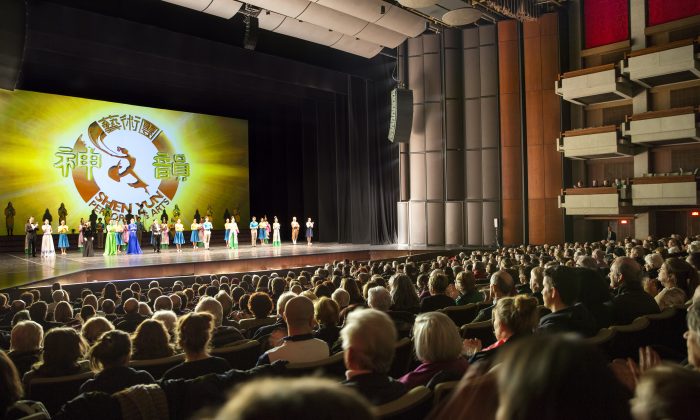 Named “Master Pastelist” by the Pastel Society of Eastern Canada, he is sought after by collectors and his works fetch thousands of dollars at auctions. Galleries have been known to boast when they have his artwork on display, works that reflect his love of the outdoors and the desire to express its beauty in all seasons.

A master of one tradition, he was inspired by masters of another, the classical Chinese dancers of Shen Yun Performing Arts who performed at the Grand Théâtre de Québec on Jan. 13.

“They fascinate us. They are in such great shape, it’s incredible,” Mr. Champagne said.

Mr. Champagne said he has an interest in ancient China. Shen Yun was founded on a mission to revive traditional Chinese culture, a divinely inspired heritage stretching 5,000 years that has sadly been nearly all but lost under the current communist regime of China.

Shen Yun was beautiful to see and beautiful to hear, he said. His companion, Rejeanne Pelletier, agreed. But she said there was more to Shen Yun than just its dazzling visuals.

“It brings us something truly spiritual. The spiritual aspect is very much present,” said Mr. Champagne.

The traditional culture of China is rooted in the values of the three philosophical systems of Confucianism, Buddhism, and Daoism, and their virtuous principles such as benevolence and justice, propriety and wisdom, and respect for the divine.

He also appreciated the two masters of ceremonies, Catherine Fang and Ben Freed, who provided an introduction to each piece in French, English, and Chinese. He described their inclusion as “an amazing idea.”

“And then the backdrop—sometimes they would leap!” he said, referring to the vivid animations of Shen Yun’s digitally projected backdrop that interact with the dancers and extend the stage, whether to a vast natural region, an ancient bygone era, or a heavenly realm.

“I see [theatre] quite a bit, but nothing can compare to this.”

New York-based Shen Yun Performing Arts has four touring companies that perform around the world. Shen Yun’s International Company will continue on to Mississauga and Toronto after one more performance in Quebec City on Wednesday, Jan. 14, 2015. For more information, visit ShenYunPerformingArts.org