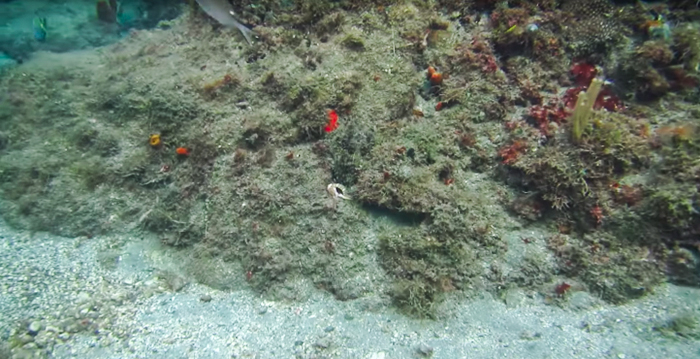 Much of the ocean remains a mystery to mankind. Although it makes up 70 percent of the earth, 95 percent of it is still unmapped. The 5 percent that we do know is already so wondrous and filled with amazing sea animals, like the nautilus and Nomura’s jellyfish.

Whether scuba diving or snorkeling, one can marvel at the wonder that is mother nature. Snorkeling is probably much easier to do than scuba diving since the latter requires some training.

There are many places one can go snorkeling, such as Komodo Island in Indonesia, the Great Barrier Reef, Maldives, or Belize. For one traveler named Jonathan Gordon, he chose the Caribbean.

Gordon was snorkeling one day in 2015 when he spotted a seashell on the seafloor. He decided to dive down to get a closer look at it. As he approached the bottom, suddenly a part of the reef started to move right where the seashell was.

Then, right before his eyes, a huge blob started to move up, and more of the body emerged. The color and texture quickly changed to reveal an octopus. From a green, moss-like color that camouflaged perfectly with its surroundings, the octopus transformed and displayed its luminescent body.

Posting the video on YouTube, Gordon, who was taken aback, wrote in the description: “This guy took me completely by surprise while snorkeling in the Caribbean. I dove down to have a look at the shell that you can see just under where the octopus appears and as I approached the octopus came out of hiding.”

He further added: “I had literally no idea he was there until I was about a metre away.”

The octopus is truly a master at camouflage, an ability it uses to hide from predators but also to hunt prey.

Looking at the footage Gordon was able to capture, the octopus blended with the coral reef perfectly. If it hadn’t moved, there’s no way anyone would have known it was there.

The video that Gordon posted quickly went viral attracting over 3 million views so far. Many social media users were surprised by this spectacle and took to the comments section.

One user wrote, “I paused the video to see if I could find the octopus before it appeared and I couldn’t. Mind blown!!”

“That’s insane. It almost looks fake. I know it isn’t but it’s so unreal it looks like CGI … LOL,” wrote another.

“Had to rewind it three times till I could actually pin point him before he changes to blue. That was awesome!!” a third one chimed in.

While a fourth one who was charmed by the creature wrote: “This is one of the most beautiful things i ve veer seen in 30y on earth.”

Considering that cephalopods are a small fraction of the 5 percent discovered ocean topography and marine life, imagine what could be found in the remaining 95 percent uncharted ocean. Until the technology becomes available to withstand the enormous pressure exerted in the deep sea, we’ll have to make the most with what’s available.

Watch the video to see if you can spot the octopus hidden: