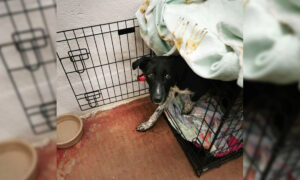 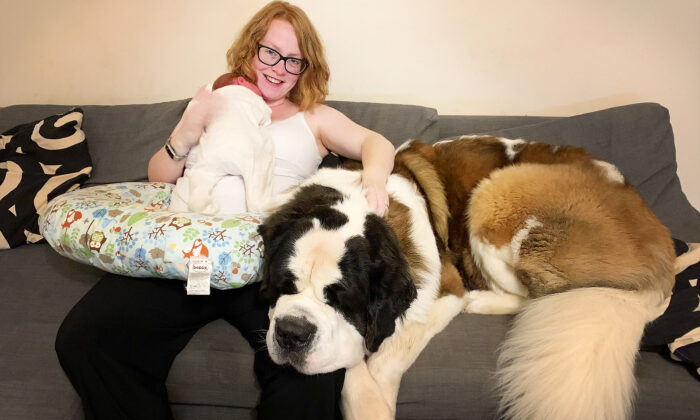 A couple are forced to warn everyone who visits their home to be careful when sitting down or they may get trapped under their 12-stone dog “Hercules”—who thinks he’s a lapdog.

Hercules, a 2-year-old Saint Bernard, is blissfully unaware of his enormous size as the “loveable goof” enjoys nothing more than sitting on people’s laps for a good cuddle.

But once the huge 161 lb. hound plonks himself on someone’s knee, there is no moving him until he decides he’s had his fill.

His owners Katie and Nick Bridge, both 29, regularly find themselves stuck under their colossal canine for so long that their legs fall asleep.

And the parents-of-one even advise house guests against sitting in any of Hercules’ favorite spots unless they’re ready to “brace themselves” for the mammoth mutt’s weight.

“Hercules definitely thinks he is a lapdog but it’s like having a fully grown man plonked on your lap,” said Katie, who works as a care worker.

“You really have to brace yourself because he is heavy, he weighs more than me.

“And once he’s on you, you can’t move until he decides he’s ready to move. You are there for the duration, there is no way you’re shifting such a big dog off your lap.

“He’ll sit on us until our legs have completely gone to sleep but he’s so happy that we just can’t bring ourselves to push him off.

“We have to warn anyone who comes to the house never to sit on the floor because that’s Hercules’ favorite place to come up and snuggle you and sit on your lap.”

When they first got him, they said he would never be allowed on the sofa. They were really strict about it at first, but by the time he was 4 months, they were calling him up for cuddles.

“He loves coming up for a snuggle, especially in the evening once we’ve put our little one to bed,” said Katie. “He comes up for a cuddle and takes up nearly the whole sofa.”

Katie and Nick, an engineer, who have a 4-month-old daughter named Zoe, brought Hercules home when he was just 8 weeks old and already 24 lb.

While they felt ready for life with a big dog, nothing could have fully prepared Katie and Nick for how quickly Hercules grew with the pup piling on almost 5 lb. a week.

Now fully grown, Hercules stands at 5 feet, 9 inches when on his hind legs, and plows through 15-kilogram bags of dog food every two weeks.

Katie and Nick admit sharing their home and lives with their jumbo pup has come with some adjustments—the priciest of which was buying a new car.

After realizing their Mazda2 would never be big enough for Hercules as an adult, Katie and Nick opted for a larger Mazda6, shelling out 24,000 pounds (approx. US$33,000), to cater to their pooch.

The couple also have to deal with lots of the Saint Bernard’s slobber, which thanks to Hercules’ height gets smothered up their walls—and sometimes over strangers’ children.

But the mom-of-one says the biggest change has been allowing hours for trips that should take minutes as everyone they pass wants to meet the mighty Hercules.

“Thankfully Hercules is as big as he’s going to get now. I don’t think our car would take much more,” Katie said. “When he gets in you can hear that the suspension is struggling.

“We already had to buy one new car with him in mind. There was absolutely no way he would have fit into our old small Mazda2.

“It has been an adjustment sharing our space with such a big dog. As he’s grown, we’ve had to move everything in our house higher and higher up so it’s out of his reach.

“He loves to steal fridge magnets so we had to move them further and further up until they were all in the top third of our fridge.”

The massive pooch is “always in the way,” and the family’s gotten used to constantly stepping over him and gaining access into cupboards he’s sleeping in front of.

“We have slobber towels all over the house ready for when he’s had a drink or he’s excited,” Katie adds. “Sometimes you find it half way up the wall.

“We have to apologize to other people when we’re out and about because he’s slobbered over their pet or child. That’s the worst.

“Everyone wants to meet him and ask questions about him. They all comment on how massive he is, how huge his paws are and so many kids shout ‘it’s Beethoven.’

“Sometimes we have to leave him at home just so we can pop out quickly.”

No matter how many changes they have to make for the burly Saint Bernard, Katie and Nick wouldn’t have it any other way.

Hercules is a loving, snuggly, and chilled-out dog who provides their little family with endless fun, and Katie even credits him for helping her tone-up post-pregnancy.

“Having Hercules around is definitely a lot of fun,” said Katie. “We really can’t imagine life without him. He’s the best.

“He is a loveable goof and a gentle giant, especially with Zoe. I can’t believe how gentle and lovely he is with her.

“He’s so chilled out when he’s at home and just mooches around and flops down for a sleep. He loves snuggles and wants to be cuddled all the time.”

When they take him out, he has “a good run around” and is “obsessed with mud and water” and finds every opportunity to take a swim.

Adds Katie, “He’s not that fussed on most dog toys but he loves his tug toy. He’s so strong, playing with him is definitely making me and Nick stronger.

“I reckon he’s really helped me post-pregnancy, making sure I get a good workout even though the gyms are closed.”