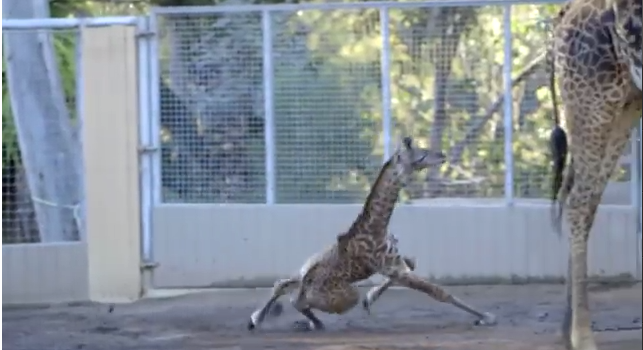 It’s Always Hard in the Beginning, But If You’re Going to Fall, Fall Like a Giraffe (Video)

It is a lesson that’s good to remember: sometimes all that separates success from failure is a bit of persistence and some encouragement from mommy. If you are an entrepreneur working on a new start up, you should probably paste this as a motto on your wall.

A 10-day-old female Masai giraffe at the San Diego Zoo, learned that lesson during her first romp around her enclosure. A few slips and a few encouraging kisses later, and the little one was prancing around like a boss.

Keepers report that the calf, born on Dec. 22, 2013, is healthy and progressing very well, even though she is still getting used to her legs. And let’s face it, that’s a lot of legs to get used to. At birth she weighed in at 157 pounds and stood 6-foot, 1-inch tall.

Visitors to the San Diego Zoo can see the active and curious giraffe calf, yet to be named, on exhibit in the Urban Jungle.