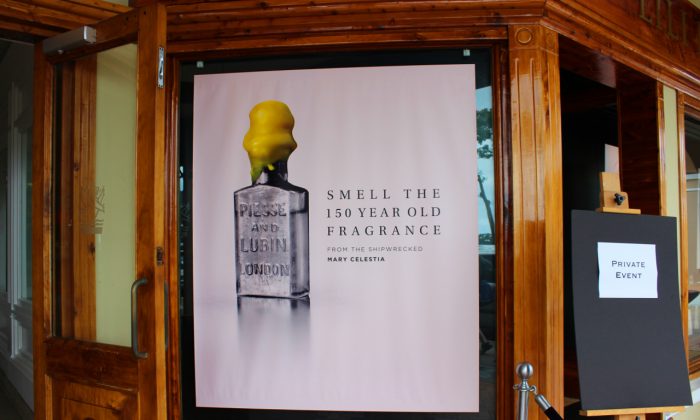 Mary Celestia: The Story of a Shipwrecked Fragrance

The year is 1864. A small bottle of precious perfume from London’s perfume house Piesse & Lubin on Bond Street, is carefully sealed with wax, ready to be shipped on the Mary Celestia. But fate has other plans, unknown as yet to the last person to have touched the bottle.

Contrary to expectation, the person who would inhale the first whiffs of the ill-fated fragrance would not be the wealthy American who eagerly awaited its arrival, but the fine noses of Isabelle Ramsay-Brackstone, at the helm of The Bermuda Perfumery, and renowned drom fragrances perfumer, Jean-Claude Delville.

How it got there is a fascinating story whose mere fragments tell us that the Mary Celestia was a Civil War blockade runner that had sunk off the south coast of Bermuda on the way to the American South in 1864. It was laden with precious goods that were prohibited during the Civil War, but could be afforded by wealthy Americans.

In February 2011, a strong winter storm removed a previously undisturbed layer of sediment from deep within the bow section of the wreck. Through a routine survey, local divers discovered in it several bottles and artifacts among which was a cologne bottle marked “Florida Water NY.” The perfume bottle was embossed with the lettering “Piesse & Lubin London.”

Who Was Septimus Piesse?

Subsequent research revealed that G.W. Septimus Piesse was a chemist, perfumer, and a prolific writer who wrote, among other scientific books, “The Art of Perfumery,” the first modern book about perfumery, in 1857.

“He’s actually the one who came up with the metaphor of describing a perfume as having a top, middle, and base note,” said Ramsay-Brackstone about Piesse. “He understood that by blending things together you can give impressions. Perfumery back then was in London, not in Paris.”

With special permission from the government of Bermuda, Ramsay-Brackstone personally carried the bottles to the laboratories of drom fragrances in New Jersey where they were opened and analyzed.

According to Delville, “Opening the bottles was like going back 150 years into life. I was shocked at how fresh and floral it was and the amount of citrus in it.”

Drom used a gas chromatograph to chemically analyze the 150-year-old liquids and determine their precise composition. Delville said the perfume primarily smelled of citrus with some more intense woody and oriental notes. There were also hints of floral and “animalic” materials such as musk.

When recreating the perfume, Delville says he tried to not just replicate it but to update it for modern tastes as perfumes in the 19th century were much stronger than people today are used to.

The Limited Edition named after the ship herself—Mary Celestia—was launched on Sept. 23 at drom fine fragrance studio in New York. The event attracted perfume industry members and VIPs that included actress Catherine Zeta-Jones who has a residence in Bermuda and loves all things Bermudan, even its dramatic storms.

And What of the Fragrance Itself?

According to Ramsay-Brackstone “It is ambery, a bit musky, but the main character of the fragrance is citrus, rosewood, and neroli.”

She mentioned that during the 19th-century fragrances were unisex and mainly worn on clothes rather than the skin.

We were all treated to “a little piece of Bermuda” on our way out and wearing it on clothes rather than skin definitely preserves the top notes longer. On the skin, its warm amber and rosewood tones become more prominent—a great scent that is both evocative of the old world and at the same time lively and totally modern.

Starting this month just 1,864 bottles will go on sale—a number identical to the year when the Mary Celestia sank.

Consumers can smell the fragrance in the U.S. and preorder the Piesse & Lubin replica, which will be available by February 2015 exclusively from The Bermuda Perfumery’s Lili Bermuda boutiques in Bermuda or online at LiliBermuda.com.

Once the limited edition number is reached, according to Ramsay-Brackstone, the secret formula will be retired into The Bermuda Perfumery’s vault. But fate will undoubtedly make sure that the story of the scent will not end there.