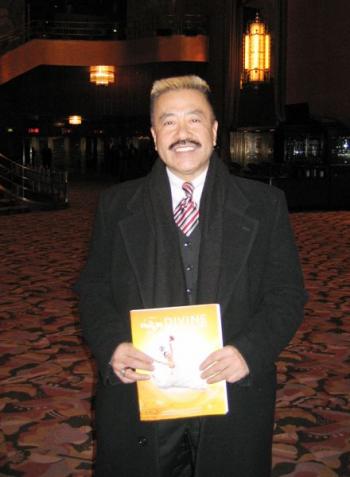 Martial Arts Master: ‘I came to the show to search for my cultural origin’

“It is an excellent show full of cultural atmosphere," he said. "The backdrop is beautiful, the costumes are beautiful, the music touches and calms peoples' heart."

Mr. Louie is a legendary figure in the overseas Chinese community. He won his first martial arts championship when he was nine years old, and holds a Dan 10 black belt today.

As the founder of the Chinese-American GoJu-Ryu Karate System, Mr. Louie has won 575 prizes in various national and international karate tournaments. At 55-years-old, last year he was a champion in the New York State Karate Tournament.

Mr. Louie is also a life member of the Million Dollar Round Table and has acted in several martial arts movies. He has taught martial arts to over 25,000 students.

He said he came as an overseas Chinese to seek his cultural roots. “I grew up here, I came to the show to search for my cultural origin.”

With its portrayal of ancient myths and legends through classical Chinese dance as well as musical soloists and a unique orchestra that blends traditional Chinese and Western instruments, Mr. Louie said people would find the performance uplifting.

“The show lets people forget all their troubles and problems, and think more on the spiritual level, and relax," he said, adding everyone could easily understand the message the show conveyed.

As an overseas Chinese, he said he felt "proud" of the show. “I am very proud to say that the Chinese could give the world such good art and dance.”

The Epoch Times is a proud sponsor of the Divine Performing Arts. Visit DivinePerformingArts.org for more information.

Read the original articile in Chinese