Martial Artist on Shen Yun’s Dancers: ‘You Can Feel the Energy Come From Them’ 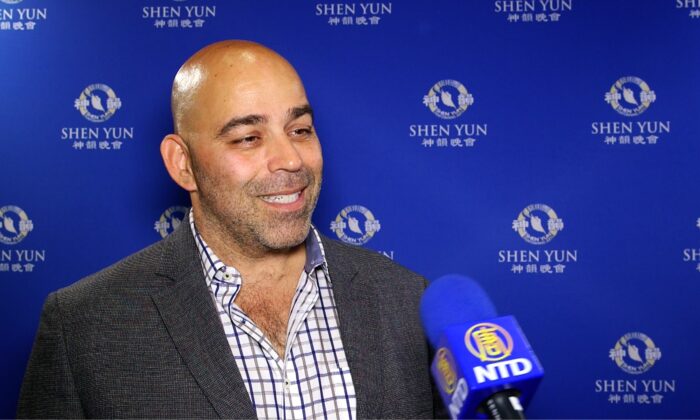 PHOENIX—Although Fred DePalma is a ninth degree black belt and runs eight karate schools in Phoenix, he became a student again the night he watched Shen Yun Performing Arts at the Phoenix Orpheum.

“Loved [Shen Yun]. It was fantastic. … Bravo. Fantastic job. I’d like to watch them [the Shen Yun dancers] train and get some pointers of how to train people on my own,” said DePalma, who attended the performance on March 5, 2020.

“Being a martial arts instructor in professional martial arts—so that’s all I’ve done for 40-plus years—just seeing the [Shen Yun] show, it’s, you know, I think it inspires any martial artist or school owner. Because you just see how perfect all of their movements are and things that we’re looking for when we’re teaching our students. And especially to be able to do it together as a group. So the moves that we teach, you know, its the same thing. You see where it comes from,” he said.

When DePalma said that “you see where it comes from” regarding the connection between martial arts and classical Chinese dance, he was right. This dance form sprang from the techniques and tumbling moves that were developed by martial artists in ancient China. In the Chinese words for each of the traditions “dance” and “martial arts,” there is a shared syllable, “wu,” that contains deep meaning.

The martial arts educator commented on Shen Yun’s lofty goal to restore China’s true culture. “You know, to bring back 5,000 years in one show is going to be impossible. But to give everybody a little bit of taste of it—there’s a couple people sitting by us while we’re watching the show, and they just said ‘I never knew,’ ‘I had no idea.’ And so they learned something while they were sitting here watching this show. So I think education is the key to anything, to bring back history.”

Although DePalma has no illusions about what can be accomplished in a single night, he gave high praise to Shen Yun’s artists for their aspirations and execution.

“Oh, it was just fantastic. I mean, just showing the history and the story … The announcers did a wonderful job bringing you into each and every dance and every routine, and seeing it progress all the way through,” he said.

“It was a work of art, the whole show was. My wife got me this for Christmas. And I was just very excited to be here and be able to do this,” he said.

DePalma greatly appreciated Shen Yun’s divinely-inspired elements, including the legend of the Creator who, as the belief goes, will one day return to earth.

“I thought it was really neat. Yes, I’m a Christian. I practice my beliefs. And then watching that and seeing it come in just kind of brings the whole world together,” he said.

The divine themes extended to a bel canto solo that was part of the program.

“Oh, the singing was fantastic. I was glad that they went and put [the lyrics] on the screen so I could read what was being sung. But you could really feel the inspiration in the song,” he added, referencing the song “Persecuted for Your Redemption,” sung in the traditional bel canto style by Shen Yun’s baritone, Qu Yue.

“Spread the truth,” is the message DePalma gleaned from the words the performer sang. “Yes, you know, and that’s being held back.”

Shen Yun cannot perform in China today due to a brutal campaign by the ruling communist party that has sought to wipe out traditional Chinese culture for decades.

“Everybody wants to spread the truth and it’s too bad that it’s being repressed and not being allowed to share that,” he said.

Part of what struck DePalma about Shen Yun’s approach to spirituality is how universal it is.

“I think everybody in every religion, even though they could be different, they all end up being the same,” he said. “So we’re all looking at the same thing, just maybe slightly different points of views of getting there, but it’s all the same in the end.”

And this spiritual awareness that Shen Yun’s artists have, that DePalma appreciated, translates into a nearly palpable energy as the performers present each piece, many say. DePalma agreed.