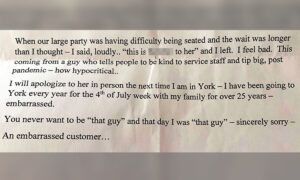 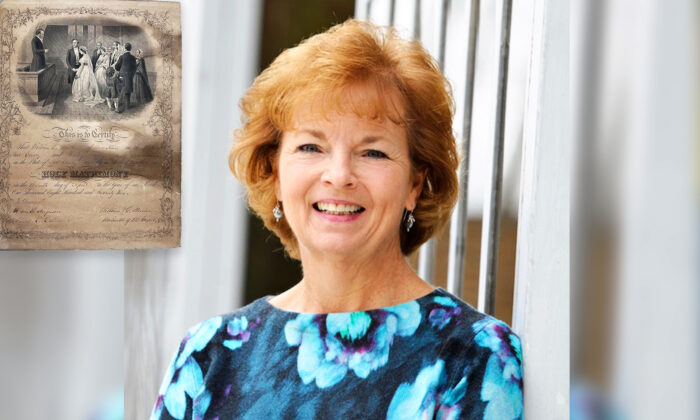 A 146-year-old marriage certificate that was discovered in a thrift store has found its home, thanks to a plea on Facebook.

When she opened the back of the frame, she discovered a hidden marriage certificate for a New Jersey couple. The date of the vows was April 11, 1875. She kept it aside to show it to Karmen Smith, the executive director of Hope Harbor Home, Brunswick County’s domestic violence program and shelter, which operates three thrift stores.

The next day, when Smith visited the store, she became aware of the find.

“My brain immediately went into overdrive thinking of all the many reasons that this document would have been hidden,” Smith told The Epoch Times. “My curious mind had to know the answers.”

She then began her research and posted a Facebook plea with the picture of the painting and the marriage certificate.

Not long after the plea went up, people began guessing the names and trying to piece everything together.

“It was then that I got a message from Connie Knox, a local genealogist with a YouTube channel focused on things such as this,” Smith said. “After a weekend of research and some Ancestry.com posts, the great-granddaughter, Irene Cornish from New York Mills, New York, was found.”

Cornish, 65, who grew up in Maryland, had logged into Ancestry.com to find information about another family member when she was notified of three messages from different people telling her to check out Smith’s Facebook post. Meanwhile, the staff at Ancestry.com had enhanced the image and found the names of the couple: William T. DeWorth and Katey Havey.

“They searched for those names in Ancestry and found me through my family tree,” Cornish said.

She immediately went to Facebook to see the post. At that moment, Cornish couldn’t believe she was looking at her great-grandparents’ marriage certificate.

“I was so excited that I was shaking,” said Cornish, who was given the same middle name as her great-grandmother. “It felt like my family was reaching out to me in some way.

“It is wonderful to be reconnected with my great-grandparents and my heritage in this way.”

The idea of “giving someone something as special as this is an incredible feeling,” said Smith, for whom family has always been important.

Cornish marveled at the unique circumstances that made this happen and believes that if she hadn’t visited the website at the right time, she wouldn’t have known about the certificate.

However, Cornish, who was born after her great-grandparents died, is unaware of how exactly they met. She just knows about them from the stories that were passed down to her by her mother.

According to Cornish, her great-grandmother Katey, and Katey’s sister, Annie, had come to Bordentown, New Jersey, from Ireland, and they worked as domestic servants to pay back the cost of their passage to the United States.

Cornish’s great-grandfather, William Tindall DeWorth, was working as a mechanist in the same place. Apart from working at the American Bridge Co. for 30 years, DeWorth had side jobs and interests, such as a ventriloquist act and a fire-eating act, and he had built a Ferris wheel that he would take to carnivals.

“I think they must have made an amazing couple,” Cornish said.

Insistent on retrieving the document and meeting the people who helped connect her to this family treasure, Cornish flew down to North Carolina on Aug. 22.

“I would like to see it preserved in some way. It is a unique piece of New Jersey history,” Cornish said.