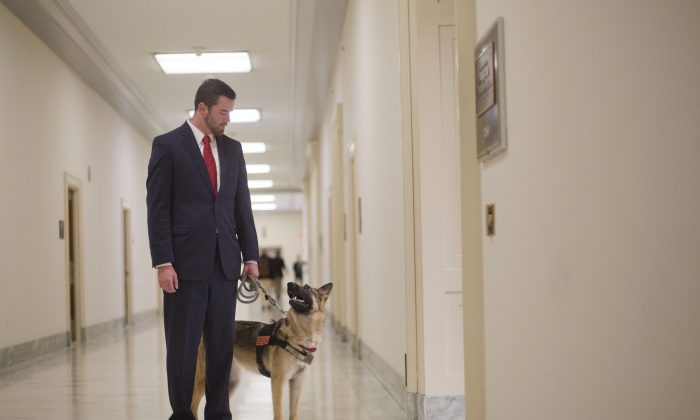 Military veteran Cole Lyle, who suffers with PTSD, and his dog Kaya, waits in the hallway of the Rayburn House Office Building on Capitol Hill in Washington, Thursday, April 14, 2016, prior to testifying before the House National Security subcommittee hearing on "Connecting Veterans with PTSD with Service Dogs." (AP Photo/Pablo Martinez Monsivais)
HK Life

Cole Lyle, who had spent most of 2011 as a marine in Afghanistan, had decided to quit opiate pills cold-turkey.

Lyle had been diagnosed with PTSD after returning from Afghanistan, and his use of sleeping pills and antidepressants was sliding into an addiction—but after seeing several of his fellow marines commit suicide, he decided to turn a new leaf.

Service dogs will save lives, and with the current epidemic of veteran suicides, it’s unconscionable to keep the status quo.
— Cole Lyle, marine veteran

He decided to get a service dog trained to detect for symptoms of PTSD, a treatment not covered by the government, which cost him $10,000 out of pocket. Kaya has been at his side ever since.

Now he’s campaigning to get the Veteran’s Administration to provide service dogs for veterans who might need them.

In 2010, a study was commissioned by the federal government to determine whether service dogs were an effective treatment for PTSD, but the results were inconclusive, as the study was plagued by problems, and ultimately only 40 dogs were paired with veterans.

In 2012, the Veteran’s Administration (VA) rejected the proposal to make service dogs available to veteran’s, citing inconclusive evidence of its effectiveness.

At the hearing, Dr. Michael Fallon of the VA said that the usefulness of service dogs for PTSD patients “have not been established in scientific literature.”

Others dispute the claim, citing private studies that evince the healing effects of service dogs.

“People with PTSD often experience emotional numbing, yet the presence of an animal has been reported to elicit positive emotions and warmth,” states a study conducted by Purdue University, parts of which were read at the hearing. “Animals have also been demonstrated as social facilitators that can connect people and reduce loneliness.”