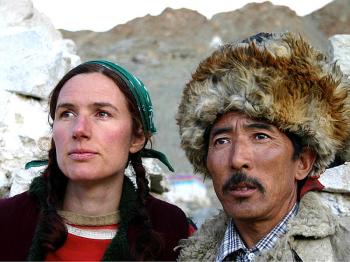 Maria Blumencron visits the children in 2005, Five years after their escape from Tibet. Lakhpa, Chime, Dolkar, Dhondup, Little Pema and Tamding live in a Tibetan Children's Village in India where they are given a proper school education. (Tao Meleta)
Arts & Culture

Matthias Kehrein
View profile
Follow
biggersmaller
Print
It all began with the image shown on television of the body of a frozen girl: frozen in the Himalayan Mountains while fleeing Tibet into Indian exile.

That image, which she saw in 1998, made writer/filmmaker Maria Blumencron ask herself, how could parents send their children away, and over such arduous terrain?

While on her quest for answers in Tibet she met Kelsang Jigme, a brave soul who had assisted the children in their escape.

Ms. Blumencron wanted to make a documentary of the trek across the Himalayan Mountain passes. She and Kelsang Jigme went to Tibet to begin. But the police were notified, arrested her and kept her in custody for one and a half days. Kelsang Jigme was incarcerated for two years.

After that she made her approach from the Nepalese side of the Tibetan border, and came to know some of the people who dared to risk their lives to escape. Among them were youths and children, carried through the snow by adults. The results of her quest led to an impressive documentary and a book.

At the end of March 2008, Maria published her second book: Goodbye, Tibet. As she did in her first work, she describes individual people's fate and their daring—to confront great danger in Tibet, to dare to escape from Communist rule, and be on their way to Dharamsala, the Dalai Lama's home in India.

Particularly moving are the children's stories whose parents sent them into exile in the belief they would have a better future in India, across snow-covered 6,000 meter mountain passes. Some never arrived at their destination …

Epoch Times (ET): It is difficult for us to imagine that parents would send their children into exile, across the Himalayan Mountains.

Maria (M): Children are not the only ones. Monks, nuns, political refugees, and old people risk this: those who wish to live out their lives close to the Dalai Lama, and also pilgrims who want to see the Dalai Lama and then return home.

ET: What are their reasons?

M: Oftentimes economic concerns play a role. The Chinese regime’s Western Development Program does not necessarily benefit the Tibetans. Tibetans must pay higher taxes than Chinese living in Tibet, particularly in the rural areas. Tibetans have less chance for decent employment. Should a Tibetan actually have the good fortune to attend school and university, it will be more difficult for that person to find employment later on. All refugees I spoke with told me, "Something is wrong with the system. They make us pay money!" Few families can afford that. Schools in rural areas are often substandard and do not represent what a school ought to be. Some families are so poor they cannot afford to feed their children. On top of that, parents want to avoid having their children exposed to Chinese propaganda and want to raise their offspring as Tibetans. I have an inkling that a Tibetan mother is convinced her children are better off in a Tibetan Children's Village abroad than at home.

ET: How should I visualize the children fleeing?

M: The children don't travel alone, but with the aid of a guide who facilitates their escape. But not all of these people are suited to deal with children. It takes special aptitude and skill. Each helper transporting five children needs another five adults to help along the way. Though the climb from the Tibetan side is not that steep, the children will sink into the snow. Then they have to be carried.

M: Depending on the route taken, at least 14 days, and quite often as long as 22 days.

ET: How are these groups equipped?

M: Very poorly, very poorly…They wear tennis shoes, wrap their stocking feet with plastic against the wet, and they don't have sleeping bags. All they have are stitched-together blankets that are covered with plastic bags. This arrangement shelters two or three people who huddle together for warmth. They don't even have ropes to rescue someone who might fall into a crevasse.

M: They often run out, because it is impossible to carry enough. The refugees arrive at their destination completely starved and also lack sufficient water at these elevations.

ET: In other words, they are facing great danger…

M: The danger on the Tibetan side consists of potential arrest or outright killing at the hands of the armed Chinese police.

ET: Once in Nepal, are they safe?

M: There are other challenges. From a hiking standpoint, the route I had traversed is extremely difficult. It is a no-man's land. There are no paths, like the paths that exist to the base camp of Mt. Everest. One hikes along a glacier's ice field, across a moraine of frozen and broken ice. I was astonished how difficult the trek is. I thought how could it be possible for a child to survive this? Unbelievable…I think not even their mothers are aware of this when they send their children away. When people have plunged to their deaths or frozen to death, it happened primarily on the Nepalese side.

M: Of course! And the girls die first. They get cold faster than the boys. But I must emphasize that this is not a story of mass deaths of children; but rather that it does happen that some children die.

ET: A guide is always present?

M: Yes, a guide who is familiar with the route. He charges for his service. But if he is caught, he disappears into prison for a few years and is subjected to torture. The escapees themselves are brought to their own prison on the Tibetan side, a facility named "Tibetan Welcoming Center." Such sarcasm. They are interned for two months and are beaten and tortured.

ET: What is it like in the Children's villages?

M: Actually, fairly good. But 16,000 children are housed in nine Tibetan Children's Villages. They are organized along the lines of SOS-Children's Villages, with a housemother, except in the Tibetan facilities one housemother oversees 40 children. According to ability, children can remain there until they complete a high school education. The Dalai Lama's sister is hard at work right now to establish colleges for these young people, making it possible for them to get a college education.

ET: What do you like about the Tibetans' personalities?

M: What impressed me is their piety and joyous nature; that people manage to retain their sense of humor despite such hard lives. Like Kelsang Jigme; the ability to subordinate one's individual fate; to say I am prepared to risk my life; to dedicate my life to the Dalai Lama. That becomes evident in the streets. For instance, with the monks who had taken to the streets and risked incarceration and beatings. Their courage has my highest respect.

ET: How was your encounter with the youths? You never met the Dalai Lama, and now Communist politics in Tibet usurp ever more territory and the Tibetans lose more and more of their culture…

M: In 2007 I met five youths in the mountains and was unbelievably moved at how determined they were. They left because they had had enough of the Chinese propaganda. Those were teens who had never met the Dalai Lama and I thought they would have been assimilated into and swallowed up by Chinese materialism. But it was not so; they are completely aware of what is actually happening. That gave me an idea of what might happen during the Olympics.

ET: What is your sense of the Tibetan's spirituality?

M: I have delved into Buddhism, but I am a Christian and am rooted in my religion. But I always tell the children they must cherish and treasure their culture, and I would make a poor example should I convert to Buddhism, and I have no desire to do so. What I sense in these people is a strong connection to their faith, something that we [Christians] lack and are I think we are poorer for it. I am happy for the Dalai Lama's huge following, but also ponder the thought that we have our own faiths and culture.

ET: Perhaps it amounts to a kind of searching…

M: People here in Europe find it appealing that the Dalai Lama exudes such joy. But when you visit the Swabian nun's cloister in Untermarchtal you will find mirth and much laughter. Oftentimes one embraces the foreign, but we have the same at home. Those are my feelings.

ET: Thank you for the interview.