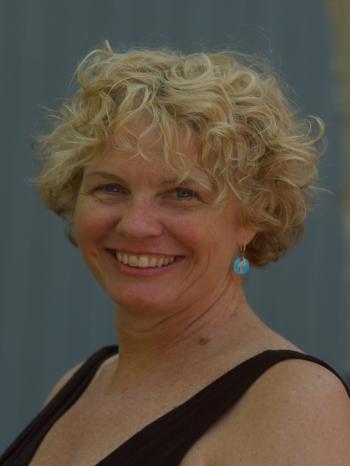 BY Molly A. Daniels-Ramanujan TIMEAugust 11, 2010 PRINT
Marcie Boyd, 58, who used to live in EcoVillage, Ithaca, New York, has decided to settle down in the Dominican Republic.

“In some ways, El Limon, the village where I live is like EcoVillage and more like home,” she says, “except that the community is very poor. The people don’t have money. I give guitar and flute lessons to children.”

I met Marcie Boyd when she came back to EcoVillage to move some of her possessions and to give the rest away.

I have interviewed 40 people for the Epoch Times since I moved to EcoVillage a year ago, and no one has ever quite seen EcoVillage the way Marcie Boyd does. Her words carry the vitality of her own life that she has had from the time she left home at 16.

She says of EcoVillage, “I loved the friendships, the celebrations, particularly the silly events, like High Teas, the Cotillion . . .

“Here in EcoVillage, I felt the most connected and accepted than I ever felt.”

Why did this woman of verve come to feel like a displaced person—an orphan?
I find her story interesting: Her wound of separation from her parents, of feeling abandoned and homeless, has its roots in the first few years of her life, even before she went away at 16 to the University of Michigan, Ann Arbor, as an undergraduate.

“I’m adopted; we didn’t really talk about it. The wound of separation can be traced back to that event: being separated from my birthmother at birth, living in foster care for three months, and then being adopted.”

Leaving home was a mixed gift of freedom—a plus as well as a minus. On the one hand, she felt resentment, feeling as if pushed out of the nest before she was ready.

On the other hand, sensing that her parents had conflicts, she believed herself and her sister to be the glue that held the parents under one roof. These two views added to her unease and rebellion.

Meanwhile, in Ann Arbor, she walked on the wild side.

She says, “Boys had been attractive to me, but now many boys were attracted to me. I could pick and choose, and I was particularly close to two, who each had the same name. I drank, I went to pot parties, I read poems by Kenneth Rexroth and others of the late 60s. Underneath all this, I was terrified: I had to pretend to be a grown-up, perhaps wanting all the while to punish my parents. I flunked out of school.

“I moved back home, transferred to the local University, Central Michigan University, Mount Pleasant, MI, where my father was the president.

“My confidence returned; I became a serious student. I graduated.

“My parents got divorced. I had mixed feelings: I was glad because their marriage had disintegrated; sad, as I had been sad about it for a long time. They now had separate households.

“From then on, no place was home. Till 1975, home was where my parents lived.

“In Boston, in 1989, my life took a new turn. It was an unusually happy year, when I did personal growth work, and got interested in building communities. I went contra dancing. I took an interest in my appearance, wearing good clothes.

“I now live in the Dominican Republic. My partner, John Katz, helps the community with many projects: he helps rural communities connect to electricity and the Internet. John works independently and with small grassroots organizations.

I asked her to sing for me. She has a voice I could listen to every day; it has range and depth, a professional singing voice that carries her life force.

I told her that she has rendered a good account of herself.