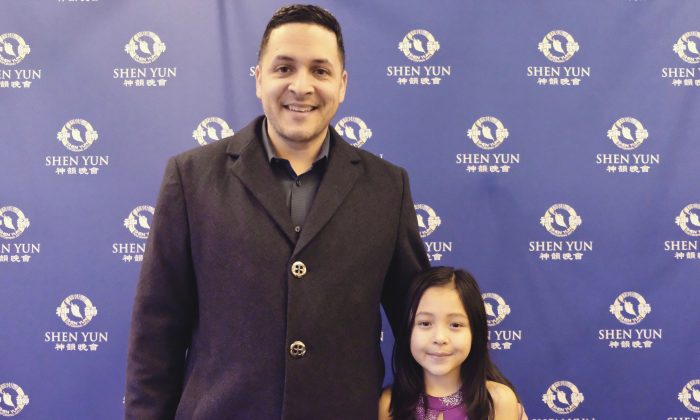 PHILADELPHIA—Dozens of dancers adorned in vibrant costumes glide across the stage, moving in unison to the melody played by the live orchestra. All the while, animated scenes from ancient China are projected onto the backdrop, transforming the stage into a live painting.

Sales manager at Wells Fargo Timothy Seeberger brought his wife, two children, and parents to see Shen Yun Performing Arts at Merriam Theater on Jan. 22. He was blown away by the artistry and attention to detail of the production.

“It was … a tremendous piece of art,” said Seeberger.

Shen Yun Performing Arts is the premier classical Chinese dance company, whose mission is to restore traditional Chinese culture through music and dance. Founded in 2006, the New York-based company has since grown to six equally-large contingents that tour the world simultaneously every year with an all-new program.

The manager was able to appreciate the skill and intricacies of the dancers’ movements, he said, because he has developed an eye for it after his young daughter started learning ballet.

“The stress on the body with some of the things that [the dancer’s were] doing is just unbelievable,” he said.

“It obviously comes with a tremendous passion.”

He said he understood the work behind the scenes to produce the effect onstage.

“There is so much effort that went into it,” Seeberger said.

Shen Yun performers are world-class dancers, expert at classical Chinese and ethnic styles of dance. Classical Chinese dance is an ancient art form, honed through thousands of years of development. It consists of a complete system of movements and expressions, including difficult flips and tumbling techniques. Alongside ballet, it is one of the most complex dance forms in the world.

Seeberger, who sat close to the orchestra pit, said he was enthralled by the musicians.

“At times in the show my eyes were torn between the dancers and just watching the orchestra work as such a team,” he said.

Shen Yun’s orchestra contains both Chinese and Western instruments, merging the musical styles of two rich traditions. While Chinese traditions emphasize transmitting inner feelings through solo instruments, Western classical styles have focused on harmony achieved by the overall ensemble. Thus the orchestra is able to convey depth of feeling with the resonance of a symphony orchestra.

“It was a perfect blend,” Seeberger said.

“It was … very thoughtful … how they arranged the instruments.”

With a mission to revive 5,000-years of traditional Chinese culture, Shen Yun seeks to impart the values and beliefs that formed the bedrock of Chinese civilization to modern audiences.

Seeberger was struck by a certain aspect of China’s traditional belief system.

“One of the themes that just spoke to me was … to do good, to impart kindness to people,” he said.

“That’s the real message I got from [the performance].”

Such values come from a culture that has, for thousands of years, believed in Heaven, or the divine. Chinese people thus believed in moral refinement, and living their lives in harmony with the dictates of Heaven, as reflected in the teachings of Buddhism, Taoism, and Confucianism.

Seeberger believed Shen Yun’s mission was important especially in modern society, where some traditions are slowly being eroded.

Watching the performance, he said, also helps build bridges to an unfamiliar culture.

“Whenever you can understand where a culture came from, it can help you connect more with the people of that culture,” he said.