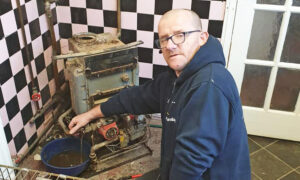 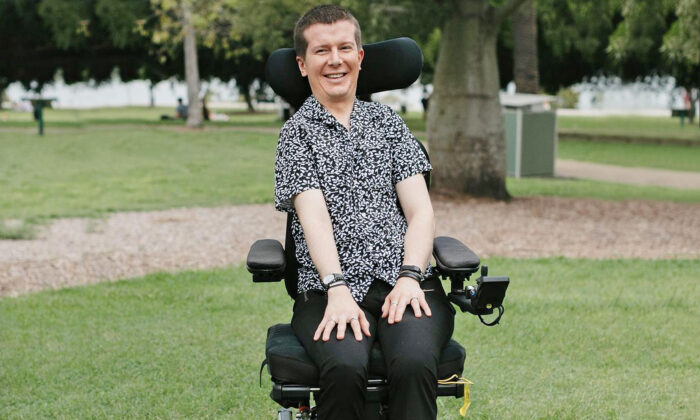 Man With Rare Condition That Forms Bones Outside Skeleton Says, ‘You Can Do It’

A young lawyer with a rare progressive disorder is giving his best to live his life to the fullest as his ailing body is gradually getting “encased in a second skeleton.”

Despite his incurable debilitating condition, he is inspiring others to hold firm to their faith and never give up.

Meet, Ollie Collins, whose motto is, “It is hard, but it’s possible.”

At 18 months old, Collins, from Brisbane, Australia, was diagnosed with Fibrodysplasia Ossificans Progressiva (FOP), a rare neuromuscular disorder that causes abnormal development of connective tissue, causing limited movement and significant pain, and in the worst situations, patients can become bedridden.

Collins works as a lawyer in one of Brisbane’s top-tier law firms, and he isn’t letting his diagnosis of FOP stand in the way of living a full, prosperous life.

“This condition causes my muscles, tendons, and ligaments to turn to bone, and for bone to grow on top of other bone and throughout joints,” he wrote in a personal account posted on Love What Matters.

“I refuse to give up. I am continuing to fight … To raise the bar for myself, and to continue to crush the goals I set for myself.”

Collins, whose condition has declined over the past several years, is determined to stay strong. As a disability advocate, he promotes recognizing and assisting people with special needs in the workplace.

He is grateful that his own employer has provided accommodations to allow him to continue working despite his declining condition, including working remotely from home.

“Disability is often viewed as less than, or as burdensome. The fact is we are more similar than we are different,” he wrote. “I feel a great sense of achievement every day because I am employed and continue to work full-time despite my physical deterioration.”

Besides his full-time job, Collins is also assisting a network of lawyers with disabilities.

“It is very exciting to see initiatives like this popping up, and I am so excited to see what we can do.”

On a personal level, Collins said that he has his own “unique challenges,” and to cope with their negative aspects he remembers to appreciate the small “every day wins.”

Recently, Collins has had to re-learn how to eat due to bone growth that has limited his jaw movements. He says it’s embarrassing for him to eat in public, but colleagues have been more than gracious, saying they don’t notice when he fumbles or spills food.

“Although I’m sure this isn’t true,” he said, “they have also said they would rather have me there than not there.”

However, despite feeling a little self-conscious at times, the hard-working lawyer isn’t afraid to push himself.

As a child, Ollie embodied an optimistic attitude with his parents’ encouragement. He played sports, rode a bike, and went scuba diving and skiing.

Unfortunately, as his condition progressed, he became less and less able to continue pursuing as many physical activities. But he says that doing these things as a child made a huge difference in his outlook on life.

“We have to have faith in ourselves, and faith in our friends, family, and loved ones,” he wrote.

“I think oftentimes, people with disabilities get so caught up in their own heads and with their own problems.”

Using his own resilience and upbeat take on life, Collins hopes to encourage other people who have disabilities.

“I know there are other people with disabilities who go through similar experiences in terms of this,” he wrote to Love What Matters. “Please remember—you can do it! It is hard, yes, but it’s possible.”

Through his Instagram page, @imolliecollins, Ollie also shares encouragement for anyone looking for a little inspiration.

“As soon as we decide to get out there and live, we take risks and sometimes we fall,” he wrote. “But we have to get up, brush ourselves off, and keep on living!”