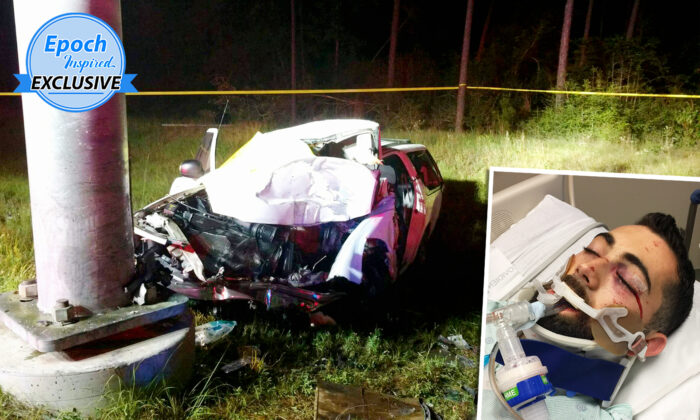 Four years ago on Mothers Day, Laurie Trahan received a devastating call at around 4:30 a.m. that no parent should ever have to receive. Her 25-year-old son was fighting for his life after a near-fatal crash.

High-spirited and always ready to help others, Caleb Trahan, now 29, of Conroe, Texas, was running on merely two hours of sleep after back-to-back work shifts when the vehicle he was driving hit a large traffic light pole on his way home that night. Partially ejected, he was stuck in the windshield, lying on the engine block. It took first responders almost an hour to cut him out of his truck.

If it wasn’t for one passing-by emergency room (ER) doctor who stopped to assist Caleb, the Trahans would have lost their son. Between resuscitation and a total of 50 surgeries, Caleb’s heart stopped three times, but he made an incredible recovery.

Talking to The Epoch Times, he said he’s grateful to the selfless service of his caretakers and first responders—the real-life heroes who inspired him to become an EMT, transforming the lives of the younger generation.

I started EMT school, and my legs were still broken, my neck was still broken. But I was on a mission. I wanted to help someone else. That’s what, I think, saved my life.
— Caleb Trahan, 29, of Conroe, Texas

“She had no reason to stop,” Caleb said of the doctor. “She was almost home. She didn’t have to do that. She did. She held my hand until the paramedics got there. Then she walked up to the street … she sat there and she watched. She went home and held her kids, and she cried all day long.

“When I came into the ER, I was actively dying. And when I met her [post-recovery], she said. ‘I wasn’t going to let you die by yourself, not on Mother’s Day. Your mom needed someone there with you.’

“That’s a role model for not even medicine, but just life and being a good person. That’s the commitment to what you do that is completely not demanded of you. So now I wear that [EMT] uniform, and it’s really an awesome feeling. It’s been a great process.”

Recalling that fateful day, Caleb said a friend had rung him up late in the evening saying his truck had broken down. After they finished the repairing, at around 1 o’clock in the morning of May 14, 2017, Caleb’s friend took him to a local bar to buy him a drink.

After two drinks, Caleb decided to drive home as it was already late. However, a few minutes later, he fell asleep and crashed into a pole.

“Seven miles down the road, I fell asleep driving,” Caleb recalled. “My vehicle left the road. I hit a large pole. I was partially ejected. I was pained and trapped so badly. They did a procedure that cut my chest open to relieve air.

“I had several broken bones, my face, I broke my neck, my back. I broke both my collarbones, my shoulders. All of the ribs on my left and most of my right. My sternum was broken. My liver was lacerated. So I was bleeding out from internally. My left leg was snapped in half, my right leg was crushed, my right ankle was crushed. I had burns to my chest, and both my lungs collapsed.”

Luckily, Julie E. Schaferling, an ER doctor who was heading back home after work, had stopped to help; she supported Caleb, who was in a critical condition, before the ambulance arrived. After his parents drove 20 minutes to the hospital, they were anxiously waiting for news in the emergency room. When both Laurie and her husband were escorted to Trauma Room 3, they found Caleb unconscious and wrapped in blankets covering the blood. He was rushed into surgery.

Five days later, he awoke with Laurie leaning over him with tears in her eyes, and he went on to ask his mother if he hurt anybody else.

“I can’t even describe the amount of pain that I was in,” he said. “What sticks with me the most is the look on my mom’s face. She was leaning over me, she was rubbing my hair. You could tell she had been crying. But she was smiling and so happy.”

During the journey to the hospital, Caleb lost pulses three times and had to be resuscitated. With his life-threatening trauma, there were doubts as to whether he would live. While at the hospital, he had 15 surgeries. The majority of the procedures were performed on Caleb’s chest.

The doctors had to fix both legs and put the bypass in to get blood in the right leg, which was crushed in the accident for about an hour and had no blood flow for almost 6 or 7 hours. They kept finding dead tissue, so to prevent blood clot and death, they had to put filters in.

Caleb was discharged from the hospital in June 2017, and since then he’s had four procedures. The purpose of the procedures is to constantly check on both legs. Throughout the road to recovery, Caleb has endured a lot and has faced several challenges since being out of the hospital and back home.

“I was stuck in bed,” he said. “I was someone who was always on the go; me, sitting still, without friends. Two weeks out of the hospital, I remember wishing that I would not have lived. I remember trying to find a way to kill myself and make it look accidental.”

Caleb realized that committing suicide wouldn’t be fair to his parents who just went through this “humongous roller-coaster ride of emotions.” He needed to make a choice, and that was the time when he reached out to the ER doctor, his guardian angel.

“Her response to me was, ‘You don’t walk away from that. So don’t take it for granted,'” he said, adding that he wanted to “pay it forward” and decided to join an EMT school.

Over a month after leaving the hospital, though Caleb was able to walk somewhat, he was told to stay in bed for six months. However, in October that year, he started the school.

“I started EMT school, and my legs were still broken, my neck was still broken. But I was on a mission. I wanted to help someone else. That’s what, I think, saved my life,” said Caleb, who’d had a rough childhood and served in the Army from the age of 17 through 19.

“I owed it to everyone and myself to create a success story.”

The recovery time for Caleb is nothing short of inspirational. Four years since his injuries, he has fully recovered, with the exception of his right leg. Every now and then, he has to go for regular checkups at the local hospital.

When looking back on the incident, Caleb is thankful for the people that saved his life and claims that they’re a big reason as to why he is an EMT now. When asked at a job interview if he would be upset to catch a late emergency call after his shift is over, his response was that his “job doesn’t have an off time.”

“The doctor who saved my life didn’t have an off time. She got there on her way home, and did everything she could to try to keep me alive,” he said.

After being a recovering patient for a long time, he now takes real pride in saving other people’s lives. Every now and then, Caleb kindly offers to go to local schools in front of thousands of children to share his inspirational story and raise awareness about the dangers of driving.

“I was the patient before I was the health care provider. And I’m able to connect with that,” he said. “I’m able to relate with my patients on a different kind of platform. It’s good for both of us.”

When speaking at local schools, Caleb tells the children that he imagines he’s receiving a phone call to say that a loved one has been in an accident. He reasons that the kids should consider making a moral pact with their loved ones that they won’t leave them in a situation where they have to do this kind of phone call about them.

Caleb has some strong words for those who are considering driving but might not be fully clearheaded or are exhausted. He says: “If you don’t think that you are safe to drive, whether you had too much to drink, or you’ve taken drugs or medications, or you are tired, distracted, emotional, you’re crying, whatever—whatever the case is, don’t do it. It’s not worth it.”

The brave EMT’s family has been there for him through every step of this long process. Despite the circumstances, Caleb says, he wouldn’t change a thing.

“It’s made me pretty strong. We’re very strong,” he said. “It’s been a journey. We’ve had our ups and downs, and I’m a work in progress. But I am happy with where I’m at.”