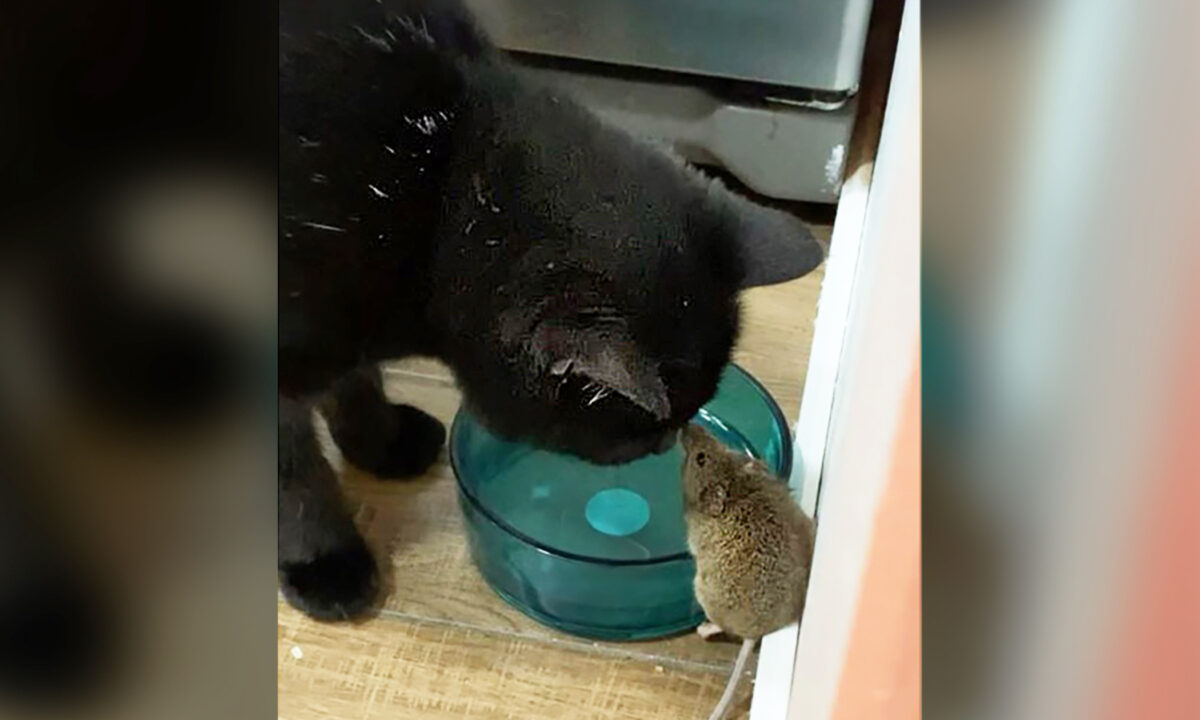 While a housecat’s traditional role has always been to catch mice, one adopted feline in Chile is changing things up—by befriending one of the rodents.

Simon, a 2-year-old black cat was first found at a gas station as a weeks-old kitten before being adopted, and was recently spotted hanging out with a mouse that was squatting in the cat’s new owner’s house.

Before this strange feline-mouse encounter, Simon’s owner, Benjamin Sagredo, discovered the mouse in his kitchen and had decided to dub him, appropriately, “Chefcito.”

“We called him Chefcito, ’cause we found him at the kitchen and we suspect that he was cooking something in there,” Benjamin explained to The Epoch Times, jokingly.

The 35-year-old man, from Punta Arenas, said that Simon the cat is peculiarly amiable for a feline, describing him as “really friendly” and “not just an ordinary cat.” “He likes to play with my dogs and visiting my neighbors,” Benjamin added.

So, when he peeked inside a room in his house that day and saw Simon together with the mouse, which was drinking from a water bowl on the floor, it wasn’t so surprising to him that they got along so well. The cat even appeared to display affection; Benjamin saw Simon appearing to “pet” Chefcito.

So, he decided to video-record the encounter. Now, with proof of the amazing friendship between a cat and a mouse caught on camera, the unbelievable is undeniable.

Benjamin said, “I believe that if I don’t record it, nobody will believe me.”

The incredible clip was posted on YouTube where it was viewed an astounding 400,000 times. But it’s no wonder that it’s so popular, given how extraordinary and touching the furry pair are together.

Meanwhile, Benjamin has garnered reactions of delight and amusement from friends and neighbors. “They already met Simon and know how sociable is he,” Benjamin said.

Simon’s soft spot for mice certainly breaks the mold as far as housecats and their duties around the house are concerned. Yet despite Simon’s not catching rodents as other cats do, his owner decided to let the matter slide and not break up the adorable arrangement.

They might even add another member to their family.

“I felt for the little mouse, I couldn’t dream of hurting him,” Benjamin added. “He’s been back several times. … If Chefcito keeps coming, we’re going to have to adopt him.”