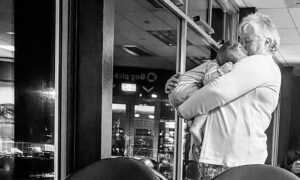 Since April 21 Abiola Aborishade, 23, has stood outside Gillette Stadium asking for a tryout with the New England Patriots, logging more than 130 hours, according to Mass Live.

Aborishade, stands with a handmade sign that reads, “Talented, hard working athlete hoping for a chance to prove myself,” almost every morning, at the same spot.

It was reported that he spends an average of seven hours a day there.

The former D-III wide receiver who was born in Nigeria and currently resides in Attleboro, MA, told CBS his quest can go a number of ways:

“The first thing is that they see me so often that they get sick and tired of me. So they almost give up, give into it, because I’m not giving in. So they give in and they say, ‘OK, let’s see what this kid can do.’

The second thing is the people who drive around here, who work around here see me so often that they almost say, ‘hey, we want to see what he can do.’

And the third thing is they just leave me out here,” he says, laughing.

Still, Aborishade, remains optimistic about his pursuit of football.

“A lot of people have a Plan B.” Aborishade said. “I don’t really believe in Plan Bs. I believe that if you have a goal, go at it as hard as you can. Once you’ve done everything you possibly can to reach that Plan A, even if it doesn’t work out the way you want to, then you move on to another Plan A.”

He posted Aborishade’s picture on his Facebook page on May 19 with a caption that reads, in part, “This is the attitude you must have if you really want something.”

Aborishade, who stands 6-foot tall and weighs 194-pounds played three years at UMass Dartmouth holding a single-season catch record with 84 grabs in 2014 during his senior year.