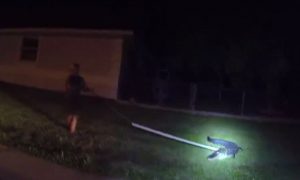 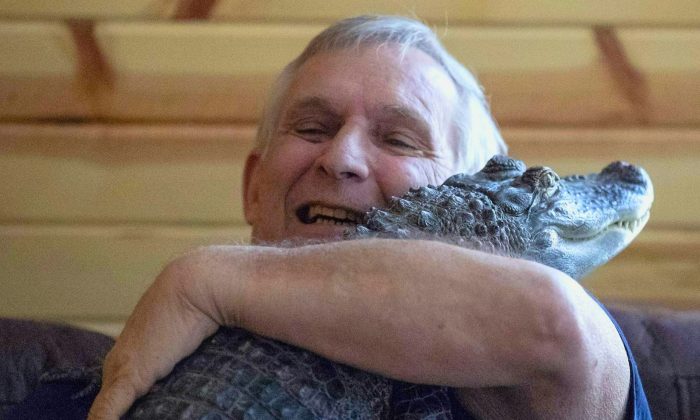 “I had Wally, and when I came home and was around him, it was all OK,” he said. “My doctor knew about Wally and figured it works, so why not?”

Wally was rescued from outside Orlando at 14 months old and is still growing; Henney said Wally could be 16 feet long one day. Henney says Wally eats chicken wings and shares an indoor plastic pond with a smaller rescue alligator named Scrappy.

Wally, who turns 4 this year, is a big teddy bear, in Henney’s words. The cold-blooded reptile likes to rest his snout on Henney’s, and “he likes to give hugs,” he said.

The alligator has never bitten anyone and is even afraid of cats, according to Henney.

Henney acknowledged that Wally is still a dangerous wild animal and could probably tear his arm off, but says he’s never been afraid of him.

Henney’s background also indicates a comfort with creatures like Wally. He hosted a show called “Joie Henney’s Outdoors” on ESPN Outdoors from 1989 to 2000, according to the York Daily Record.

Henney frequently takes Wally out for meet-and-greets at places like senior centers and minor-league baseball games.

“He’s just like a dog,” Henney told a woman at a recent outing to a senior center. “He wants to be loved and petted.”

Wally, an emotional support alligator visits senior homes and is just like a dog, according to his owner…https://t.co/5s0iOK3tSX pic.twitter.com/EblfiTepxP

Alligators in a North Carolina swamp made headlines earlier this week, when they were caught on film allowing their snouts to get frozen into the water just as it dips below freezing.

Last year, the alligators at the swamp park displayed the same behavior, picking up interest around the world with the rarely seen winter survival strategy that allows them to keep breathing for days in the ice.

Typically found in the humid heat of the Everglades and southern states, where frozen swamps are rare, alligators might not appear to need cold weather survival skills.

But the 65-acre Shallotte River Swamp park and sanctuary is near the northern edge of the alligator’s habitat in North Carolina.

This year as the temperature dropped toward zero, even more alligators joined in, with 18 allowing their noses to get caught as the ice formed, said park Manager George Howard, who filmed the behavior.

“All our alligators in ice here,” Howard says in the video. “Eighteen American alligators are thinking ahead, as they poke their noses through the ice.”

The alligators are believed to sense that the water is just turning to ice.

Last year was the first time that the behavior was seen in an animal park, Howard told the Charlotte Observer.

The water thawed after several days and the animals appeared to suffer no injuries or ill effects.

Last year the staff found that the gators do not react when they are disturbed in their frozen state. Howard said it because they are trying to conserve energy.

The Epoch Times reporter Simon Veazey contributed to the report.