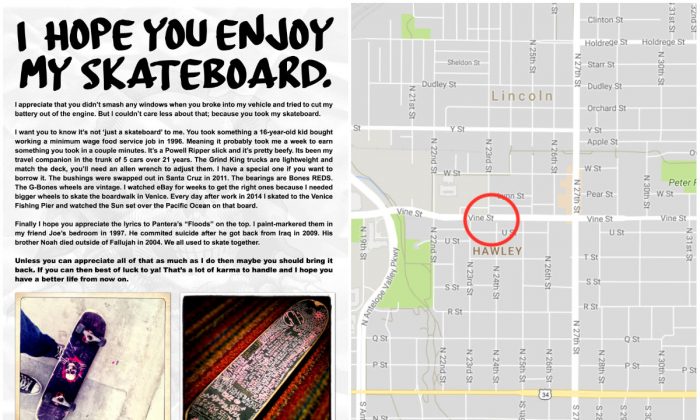 L: A note to the thief of a skateboard. (Courtesy of TakenFloods); R: A place where the van from where the skateboard was stolen was parked in Lincoln, Neb. (Screenshot via Google Maps/The Epoch Times)
Life & Tradition

A Nebraska man wrote a heartfelt note to the person who stole his skateboard and the internet feels his pain. The board was precious and personal—a memento of his years growing up and friends lost.

The 37-year-old designer and event producer had the board stolen when somebody broke into his van between the night of Aug. 30 and the morning of Aug. 31 in Lincoln, Nebraska. The van had tinted back windows and the board was under a blanket in the back.

The thief also took a bowler hat from the dashboard and goggles used to watch the solar eclipse. “So I’m guessing it’s some sort of steampunk drug addict with a slim jim and bolt cutters,” the owner, who didn’t identify himself, said on Reddit.

The man hadn’t realized the board was gone until the next day when he looked for it under the blanket. It was a painful moment, he said. The-21-year-old skateboard meant a lot to him.

“I just kind of let that loss run around in my brain so I could cycle through the emotions,” he told The Epoch Times in a Reddit direct message. “After a couple days I needed to do something. I’m a designer, it’s what I went to school for and spent most of the last 10 years in LA doing. So I guess that was my vent.”

So he wrote a note to the thief:

“I appreciate that you didn’t smash any windows when you broke into my vehicle and tried to cut my battery out of the engine. But I couldn’t care less about that; because you took my skateboard.”

“I want you to know it’s not ‘just a skateboard’ to me. You took something a 16-year-old kid bought working a minimum wage food service job in 1996. Meaning it probably took me a week to earn something you took in a couple of minutes. It’s a Powell Ripper slick and it’s pretty beefy. Its [sic] been my travel companion in the trunk of 5 cars over 21 years. The Grind King trucks are lightweight and match the deck, you’ll need an Allen wrench to adjust them. I have a special one if you want to borrow it. The bushings were swapped out in Santa Cruz in 2011. The bearings are Bones REDS. The G-Bones wheels are vintage. I watched eBay for weeks to get the right ones because I needed bigger wheels to skate the boardwalk in Venice. Every day after work in 2014 I skated to the Venice Fishing Pier and watched the Sun set over the Pacific Ocean on that board.”

“Finally I hope you appreciate the lyrics to Pantera’s “Floods” on the top. I paint-markered them in my friend Joe’s bedroom in 1997. He commited [sic] suicide after he got back from Iraq in 2009. His brother Noah died outside of Fallujah in 2004. We all used to skate together.”

“Unless you can appreciate all of that as much as I do then maybe you should bring it back. If you can then best of luck to ya! That’s a lot of karma to handle and I hope you have a better life from now on.”

He said he posted the note around Sept. 7 at a few coffee shops.

Although the note sounds calm and collected, it wasn’t easy for the man to show such magnanimity in the face of loss. “Keeping expletives out of it was hard,” he said. “I’m angry sometimes, but I felt mostly numbness from the experience.”

On Sept. 12, a worker in Indigo Bridge Books & Cafe in Lincoln saw the note posted on a bulletin board, took a picture of it, and posted it on Reddit.

It has since received over 3,000 comments. The owner of the skateboard noticed the post and posted a short video of himself riding the board to prove his identity. He tried to read through all the comments and reply to some questions people raised.

Many people asked about his experiences with skateboarding, and some offered help looking for the stolen board. Many wished him reunification with the prized possession. Some also wanted to know more about the friends he lost.

“Joe was the most effortlessly funny human being I’ve ever met. We were complete savages on Drive Thru and I’ve probably never laughed more in my life,” the man replied. “Noah I could show something on guitar once and he would have it. He was just starting but he totally had an ear for it. They both had a ridiculously natural talent at anything they tried. I constantly wonder what they’d be doing in the world right now.”

The man is now a bit more optimistic the board may yet turn up, though he said he knows the odds of that happening are low.

“I think the most amazing part is how many people told me it hit them in the feels,” he said. “That feels like a reward.”

He asked the thief to return the board to The BAY, a Lincoln-based skate, art, music, and homeless outreach center.

Correction: The owner of the skateboard is a designer and event and concert producer.