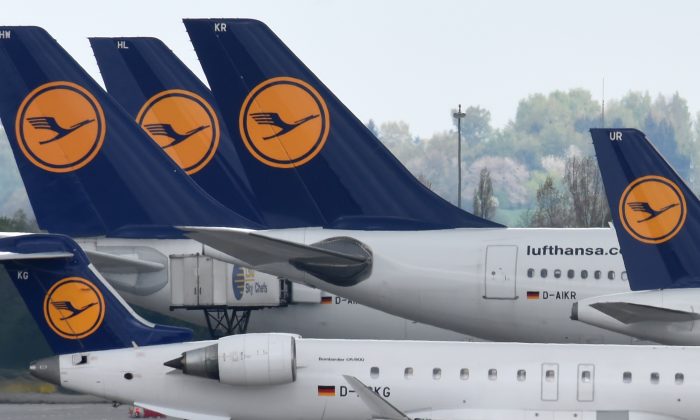 Aircrafts of German airline Lufthansa sit on the tarmac of the Franz-Josef-Strauss-Airport in Munich, southern Germany, on April 27, 2016. (CHRISTOF STACHE/AFP/Getty Images)
Life & Tradition

A mentally disturbed passenger caused a disturbance on a Lufthansa flight when he opened the door at 38,000 feet to smoke a cigarette.

The flight had departed from Munich to Vancouver, but had to make an emergency landing in Hamburg due to this incident.

Hamburg police confirmed that the man was diagnosed with a mental illness.

“It was reported that there was a man in the back of the plane screaming and yelling and apparently tried to open the back door of the aircraft at 38,000 feet,” passenger Dan Iosch told CBC News.

The man had been irascible before the takeoff, but calmed down after, at least for a while.

“Apparently at the beginning of the flight he was being a little difficult, but they decided to take off,” Iosch said. “I guess once we got in the air he got more and more agitated and he tried to light up a cigarette. He was yelling and screaming.”

The 11-hour flight was delayed for three hours as a result.

“The captain was amazing. He had everything in hand and he was calm, but he redirected the plane to Hamburg immediately and we were cleared in straight away,” Iosch said.

Iosch was returning to Vancouver from Switzerland, where his friends won third place in the Volleyball World Championship.