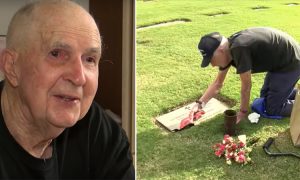 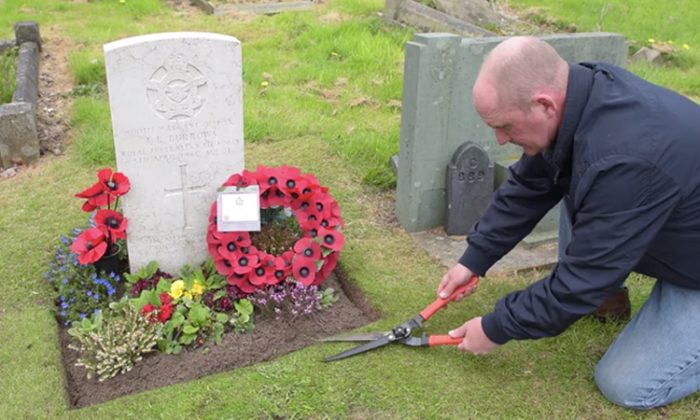 From the archives: this story was last published in January 2019.

In 1992, an Englishman stumbled upon the grave of a lone Australian WWII veteran in a Staffordshire cemetery, whose background was shrouded in mystery. Now at the age of 52, the man has been devoting his own time for the past 25 years, tending to the gravestone’s upkeep … and trying to piece together the veteran’s mysterious past.

Seeing as though the churchyard “wasn’t exactly the tidiest,” and that the fallen Australian soldier was likely far from family, Hartshorne took it upon himself to keep the grave “spotless” in homage to the hero who had perished defending Hartshorne’s homeland so far from his own home.

“I just decided I’m going to do this and I’ve done it ever since,” Hartshorne said. “[It] is the right thing to do.”

He stripped and leveled the turf, erected a small barrier, and planted bulbs for all seasons of the year. Hartshorne visits a couple times per month “depending how much the grass grows,” he said.

“I purely do it out of respect,” Hartshorne told Birmingham Mail. “Greenkeepers are very meticulous about how short grass is.”

Hartshorne soon became curious of the fallen soldier’s past, though it would take many years of searching before the man’s mystery was revealed. Learning the truth and locating the man’s family and home became his mission.

“There was just something about this grave because, I’ve no idea the distance between England and Australia, but it was just this young man, 21-years-old, had come all this way to fight a war and never got the chance to go home.”

After digging through mountains of war newspapers at the local library and researching online records, finally, he located a photograph of the fallen RAAF vet, something Hartshorne described as a “pretty special moment.”

Hartshorne learned that Burrows had been stationed with the RAF 297 Squadron at the Netheravon Airfield in Salisbury, and was killed on April 5, 1943, while flying a mission to drop propaganda leaflets over Germany.

Burrows was serving as navigator when their aircraft, which was ominously nicknamed the “flying coffin,” met with heavy anti-aircraft fire, and after sustaining damage, amidst heavy fog, they were downed over France.

While Burrows and the pilot perished, three other crew members survived the crash.

The Royal Air Force vet had first enlisted in Middle Brighton, Victoria, before moving to England, where he would marry a local girl named Marjorie Preece in August 1942. It is believed that he was buried at Staffordshire to be near the wife he left behind—who later remarried and moved to America not long after the war.

Meanwhile, the words of Burrows’s parents inscribed on his tombstone echo their remembrance of him from ages past: “Still living, still ours. Mother and Father.”

“I’ve got a daughter who is 21. Losing him at 21, I’ve no idea. It must have been traumatic for the family,” Hartshorne said.

Later, Hartshorne managed to reach a niece of Burrows, and he was eager to learn the rest of the soldier’s story.

“Relatives have made contact but I’ve not spoken to them yet, just by email,” he said. “It’s just waiting now. I’ve waited this long, I can keep waiting to find out more.”

Hartshorne was recognized for his devotion to the fallen airman at the Anzac Ceremony’s 100th anniversary at Cannock Chase, where a local branch of the RAFA presented him with a certificate of appreciation. On Anzac Day, an Australian airman also visited Burrows’s grave to pay his respects.

“He must have been the first person from Australia to visit in 75 year—it was very moving,” Hartshorne said. “I was overwhelmed, gobsmacked. It’s all very humbling. It’s part of my life now. I’ll always tend to it.”

Hartshorne also told Caters News, “I have to go down anyway to visit my family’s graves and it’s just an hour out of my time—it’s my small way of saying thank you.”

Concerned about who is going to tend to his grave after he gets old, Hartshorne said, “When I’m too old to continue, I don’t know who will look after it. I’ve got two daughters and a son—I suppose I could twist their arms.”