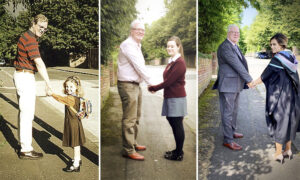 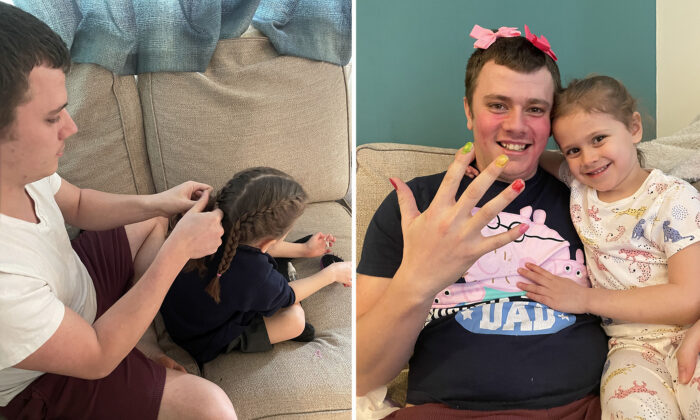 A man from Fareham, Southampton, England, has been hailed as the “world’s best dad” after he spent hours on online hair tutorials and practicing intricate styles on a doll’s head so that he could play with his beauty-loving daughter.

Callum Hartley, 28, has worked from home since March 2020 and has been “treated” to daily makeovers including manicures and pedicures by his daughter Phoebee Hartley.

The Southampton FC supporter kept 5-year-old Phoebee entertained in the mornings before homeschooling began by letting her loose on his hair, face, and nails.

“As bad as lockdown has been for everyone, it’s been almost beneficial for our family because we’re spending so much more time with the kids, which we’ll never get again,” Callum said. “Every morning between getting her up and school starting I get the pamper treatment from Phoebee.”

The dad-of-two regularly goes about his day with bows in his hair, make-up on his face, and brightly colored nails he’s forced to scrub clean before jumping on work video calls.

“It’s at least half an hour or 45 minutes every morning, sometimes the make-up won’t go right and she’ll baby wipe it all off and re-do it,” he further added.

Callum admitted that it’s not his usual look to have his fingernails painted and his hair done but he is certainly glad that he has been able to get more daddy-daughter time together.

Then, wanting to return the favor, Callum studied countless online tutorials, and decided to buy a hairdresser training head and has been diligently practicing styles while watching football on television.

He said he ordered a doll’s head from Amazon for 23 pounds (approx. US$32) so he could treat Phoebee’s shoulder-length locks to fancy hairstyles.

Proving to be the ultimate multi-tasker, Callum regularly settles down to watch the football at night while practicing his styling technique on the doll he has dubbed “Hermione” with a tutorial playing in the background.

“My aunty is a hairdresser and she taught me how to plait donkeys years ago but I’ve never done anything like this before, it’s good fun.

I subscribe to a man on Facebook who’s a certified cosmetologist. I sit and scroll through his tutorials when I have a break from work, find one that’s really cool, and watch it. I think ‘if he can do it I can do it, right?” Callum shared.

Additionally, Callum also spends quite a lot of his time practicing different hairstyles until he goes to bed. Proud of the styles he can do, Callum said: “I’ve mastered Dutch braids, I can do a fishtail in a pony,  infinity braids, a rope braid, French plaits, and a bow in the back of her head. Most nights I’m adding a different style.”

Callum admits that not many other fathers he knows are good at styling girls’ hair.

However, when he shares the results online, Callum’s inundated with requests for help.

“I posted my pictures [on Facebook, where other dads are] mainly posting about their grills and new lawnmowers,” Callum said. “When I post my pictures I do wonder what they’re going to say but everyone comments things like ‘oh my god teach me’. It definitely goes down well with other dads online.”

His 26-year-old wife, Courtney Hartley, who is an NHS health advisor said Callum’s newfound interest in styling hair has helped free up some previous time in the morning while she gets both children ready for the day.

“When I got the text saying she was going back to school I remember thinking ‘for god’s sake I’ve got to get up every morning and do her hair again’ and Callum said he could do it,” Courtney recalled.

Courtney is grateful to know that she has a helping hand now when she is trying to get two of everything ready.