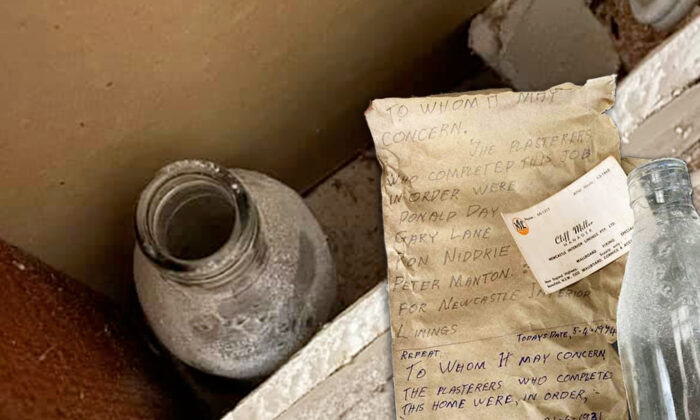 Peeling back the layers of a home during renovations is a bit like time travel.

For one man in New South Wales, Australia, contractors demolishing his wall revealed a time capsule—a glass bottle containing a note—in a wall cavity in his Newcastle home.

The home owner, Matt Streatfeild, was looking behind the plaster within the exposed bones of his house when he found the glass bottle and its contents, which apparently was left there some 50 years ago.

“Initially, I thought the builders had put a bottle there. It wasn’t until I picked it up that I realized this was something that had been there some time,” Streatfeild told The Epoch Times.

“I was a little surprised and it took a good 30 seconds for it to sink in that this was something legit and potentially special.”

The capsule consisted of an old glass milk bottle with a rolled-up note inside, and Streatfeild had to strain to fetch the paper out.

Reading the note, which was well preserved, they saw it was penned by a contractor, and was dated April 4, 1974.

The message said that the workers were awaiting their weekly wage of $106, and noted that the bottle was one of the first rolled out with the new metric conversion at the time—equal to “one imperial pint,” it read.

The workers who were present were named in the note.

Taking to Facebook, Streatfeild managed to track down one of the men, Ron Niddrie, who was just 19 years old when the note was penned; and after posting a photo of the bottle and message, news station NBN News reached out and brought the pair together the next day.

Niddrie, who’s now 66, recalled making the deposit decades earlier. “One of these little mementos has paid off,” he told NBN. “The fact that it was 47 years ago was even more of a shock.”

In the spirit of the discovery, Streatfeild plans to make a time capsule of his own—with a note describing the story of their first finding plus what life has been like in 2020–21—to be tucked inside the wall cavity before being finished.

He also plans to hire Newcastle Interior Linings to complete wall sheeting job, and make a bottle contribution of their own.

“I’ve asked that they also leave a message in a bottle, with the workers’ names, and weekly wages in 2021–22 numbers,” Streatfeild added.