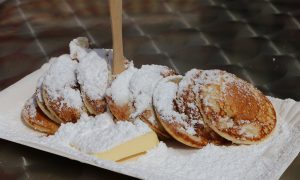 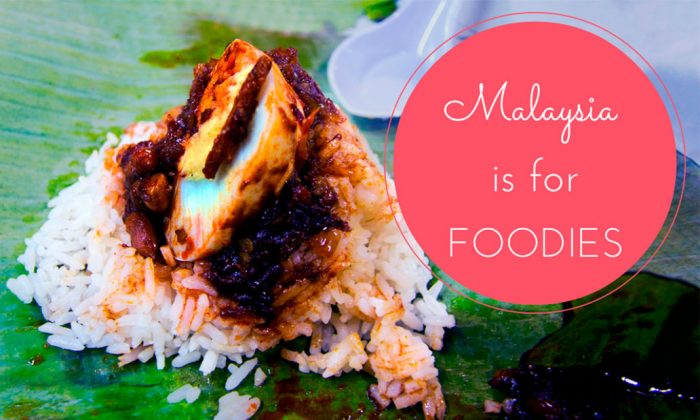 Malaysia Is for Foodies!

After publishing 10 things to do in Kuala Lumpur, I immediately got an overwhelming response with people saying things like “eating better be at the top of the list!” and “9 out of 10 of those things better be eating!”

And although my list wasn’t actually in a particular order, without a doubt, I would have to put eating at the top of it. Malaysian food is probably the most underrated food ever, and now I can’t get enough of it.

So if you don’t know what Malaysian food is, don’t worry. Before my trip I really hadn’t tried a lot of Malaysian food. Come to think of it, I think the only thing I really knew beforehand were laksas and rendang. But even though I personally hadn’t had a lot of experience with Malaysian food, I knew it was something people raved on and on about.

This gave me high hopes for eating on my trip, but yet I was a little afraid of trying new foods in a country that places so much emphasis on shrimp, which is something I’m allergic to. Where was I to start? How was I supposed to know if something had shrimp in it? I started to get a bit paranoid the more I worried about it.

However, that’s where Food Tour Malaysia came into play. I was super excited to be joining a food tour on my first night there to get the lowdown on what foods were delicious– and safe for me to eat!

Food Tour Malaysia is Kuala Lumpur’s original food tour, and while I haven’t been on any other food tours in Malaysia, I can’t imagine there being a better one.

Food Tour Malaysia promises that you’ll “taste the real Malaysia” while on their tours. Little did I know this meant embarking on an over 5-hour journey through local establishments on the outskirts of the city. Being led around by a local, to joints where only locals go, was an experience I couldn’t have easily replicated on my own.

As I’ve mentioned before, Malaysia is made up of primarily 3 cultures: Malay, Indian and Chinese, so it was only fitting that we sample a variety of dishes from each culture.

On top of that, after hours of conversation on culture, politics and general life in KL, I felt that I left the tour with a much better understanding of the country and its people.

So what’s better than learning about the staples of Malaysian cuisine and culture?

So without further adieu, here’s a look at some of the best dishes from my introduction to Malaysian food:

Our first stop of the night was a hawker center for some proper Malay cuisine. Our small group of four sat down and within minutes baskets of food were being placed in front of us at our table.

The first thing we tried was nasi lemak, which is unofficially known as the national dish of Malaysia. Traditionally, this is a breakfast item, but nowadays you can find people eating this at all times of day.

Nasi lemak is simply rice cooked in coconut milk, but this dish is all about the toppings. What this dish comes with varies depending on what region of Malaysia you’re in, but typically you’ll find a hard-boiled egg, peanuts, anchovies, and sambal piled on top.

As we were shoveling spoonfuls of rice in our mouth, another basket was placed in front of us. Inside it looked like a bunch of thick leaves held together by toothpicks. Our guide Deric pulled out the toothpicks and the actual dish was revealed inside.

Called otak-otak, Malay for “brains”, this dish is made of mashed fish paste that’s been infused with spices. Once all the ingredients have been nicely blended together, they spoon them into the leaf and barbecue it over a grill until the leaf becomes slightly charred.

While the texture looks a bit off-putting from first glance, once you bite into it, the flavor of the spicy fish keeps you eating more until its all gone.

Finishing what we could, we then had a short chat with the chefs, telling them how delicious we found Malay cuisine thus far. We watched as they quickly and effortlessly assembled more of the dishes we had just eaten before making our way to our next destination.

Ah, Chinese food, something I’m at least familiar with due to living in Hong Kong. We arrived at another location that seemed similar to a hawker center, except for Chinese dishes only. Sitting around on plastic tables, talking, we waited for our food to arrive.

Soon, dish after dish was brought to our table, and like proper Chinese, we began to pick what we wanted from each individual dish, family-style.

There were a variety of noodle-based dishes, like the Malaysian favorite Hokkien mee, as well as things like spring rolls, peking duck and yin yang rice.

While none of these were particularly new to me, I found the peking duck to be absolutely amazing and I kept picking away at it piece by piece. However, I did try one thing that was new, asam boi.

Asam boi is a drink often sold in hawker centers. It was bright and yellow in color, so I immediately got excited thinking it would taste like lemonade. That excitement quickly disappeared when Deric informed me that lemon flavored anything is extremely rare as lemons can’t grow in Malaysia, and the imported ones are extremely expensive. He corrected me by telling me the drink was made from limes.

Ugh, I hate limes. After hearing what it was, I was immediately reluctant to give it a try. I thought there’s no way I could like it. Asam boi is a drink not only made from limes, but it’s also been flavored with sour and salty dried plum.

There was really nothing that sounded appealing about this drink, but seeing as I’m always thirsty, and I needed something to accompany all that peking duck, I gave it a sip. Delicious.

While I still can’t say I like limes (since I’ve tried them post-trip in Hong Kong), there’s just something about these combination of flavors that was incredibly refreshing and thirst quenching!

As we hopped in the car to seek out our next location, we happened upon a night market. Deciding it would be fun to experience one of KL’s “roaming night markets”, we scoured for a parking spot and made our way through the crowds.

Walking through the twisting path of stalls, we stopped to make small purchases of anything that looked appetizing. We grabbed a few bags of fish crackers, different meat satays, and a few desserts, before stopping near a vacant alley to eat them.

All the street food I sampled was exceptional, but my favorite was something called apam balik.

This sweet treat is basically a really thick giant pancake loaded with sugar and peanuts. It may sound really simple, but the flavors were what made it great. Watching the vendor skillfully make each pancake, we were amazed at the work and skill that went into making it.

We knew we weren’t the only ones who loved this snack, as a crowd of others gathered around us waiting for their turn to purchase one.