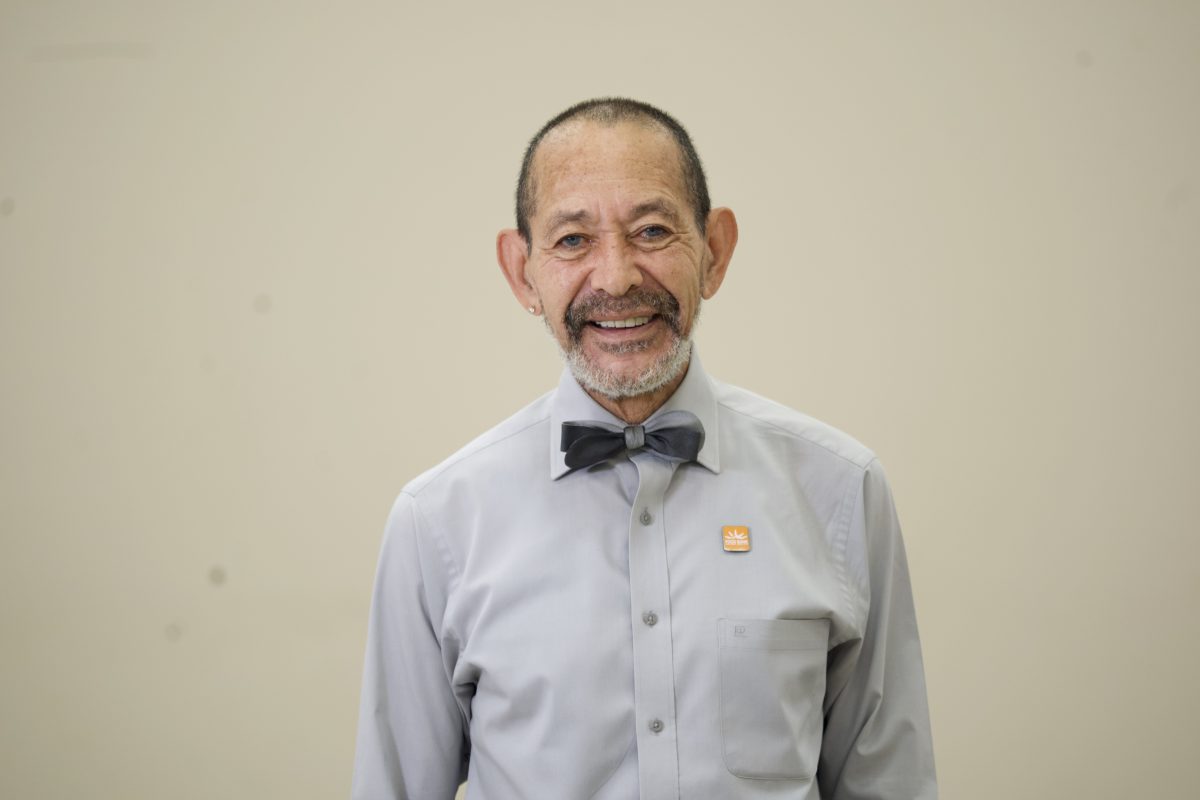 NEW YORK—They’re not as commonplace as they used to be, but bow ties are making a comeback. One man isn’t satisfied with the boring classics, and he’s pushing the boundaries of fashion and style.

Gregory Bruce isn’t your typical fashion designer. The 72-year-old moved to New York after his wife died in a tragic accident after 47 years of marriage. The highly respected advertising copywriter and producer ended up in an unlikely place.

“I had some devastating things happen to me prior, and wound up living on the subway, which I call my mobile home. It was the A and F train, and I literally traveled from place to place in New York City,” Bruce told The Epoch Times.

Suffering from severe depression, Bruce would ride the train reading novels, and carrying a roller bag with a suit, a couple of shirts, two pairs of shoes, and a change of underwear so he could look respectable when he needed to.

“I could walk into any hotel in town; nobody ever thought I was homeless,” Bruce said. “On the inside I was killing myself and on the outside I was like, ‘I’m not going to show anybody.'”

In July 2015, Bruce was walking out of the subway station when a man named Clarence grabbed him. Bruce was 120 pounds, and Clarence could tell he clearly needed something to eat. He’s 160 pounds now, and still looks lean.

Bruce joined the Senior Center at the Food Bank For New York City in Harlem, and Clarence quickly befriended him. Clarence was more than a good Samaritan. He paid the deposit and first month’s rent on a room in an apartment for Bruce.

He now had an address, so he could get social security benefits. Bruce tried to pay Clarence back, but he wouldn’t accept.

Bruce kept coming back to the Food Bank, and began volunteering. He still does today.

“The place that brought me back to life should always be in my life,” Bruce said.

One day Bruce found that he had a little extra cash to spend, and decided he was going to buy himself a bow tie. His grandfather and father had always worn them, and so had he. He went to Saks Fifth Avenue, but once he saw the astronomical $120 price tag, he was shocked.

“Literally 80 percent of every bow tie sold in America is made in China. That bothered me, that somebody could just slap their name on a piece of material [that] I later found out cost 99 cents, and then sell it for $120. That galled me,” Bruce explained.

That’s when Bruce taught himself how to sew, and began fashioning his own bow ties. His first creations were completely handmade. One day, he was walking on Fifth Avenue and someone stopped him. The man complimented him on his bow tie, and asked where he could get one.

“It dawned on me that you can get one from me,” Bruce recalled.

In April 2016 Bruce embarked on a mission to create a contemporary bow tie for the 21st century. After working in the marketing and advertising industry for so long, he realized there was a demand for his work.

Because of a clerical error indicating he was deceased, he had stopped receiving social security. Now, he had to make a living out of his newfound craft. He began selling his bow ties on the street in SoHo, and had to hustle to make a living.

Bruce then created a Facebook page and a website for his burgeoning bow tie business, aptly named Bows Nouveau, which was a struggle in and of itself.

Bruce makes two styles of bow ties, the butterknife and the silver spoon, named because of their shapes. He makes them in pre-tied and freestyle models. His pre-tied models are unique because when they are taken apart, they are identical to a freestyle model.

“If and when you ever get the idea that you want to tie your own bow tie, you can untie this tie and you’ll have a real bow tie in your hand,” he said proudly.

For Bruce’s fall line, all of his bow ties are asymmetrical.

“I got to tell you, this all came out of me watching the Emmy’s a couple of weeks ago, and every single man in that show was literally wearing the exact same bow tie. That same black bow tie. You guys are supposed to be creative people, what the heck are you doing? You’re all wearing the same clothes,” Bruce said as he explained the motivation behind his asymmetrical bow ties.

“The idea is now for me to always make sure that there are two coexisting sides of the bow tie. They’re at war with each other,” Bruce explained.

He uses a variety of fabrics and colors from all over the world, and strives to make unique bow ties. Out of each piece of patterned fabric, he makes a pre-tied and a freestyle model, and then keeps one for himself. The only other person a customer will see wearing the same bow tie is Bruce.

“I can go now for about year and you’d never see me in the same bow tie!” he said.

He’ll make custom bow ties for people as well as matching accessories, such as pocket squares.

Every bow tie starts with a pattern he designed. Bruce buys the fabric, cuts it into strips, and then draws around a hand-drawn template.

He then cuts them by hand using pinking shears, and uses a secondhand sewing machine to construct them. For the curved edges, he sews by hand.

For the pre-tied models, he adds adjustable straps and ties them himself. He also names all his bow ties, and doesn’t use stock numbers.

He’s excited by the design process and choosing fabrics. His basic design philosophy is we should never all be the same.

For him now, he wants to make bow ties that really stand out. “I want them to be as unique as the individual who chooses that bow tie,” he said. “Your tie will always say, ‘That’s a cool guy.'”