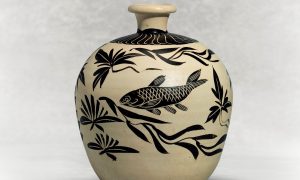 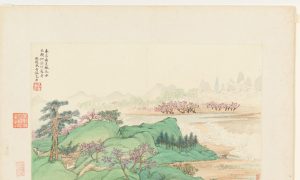 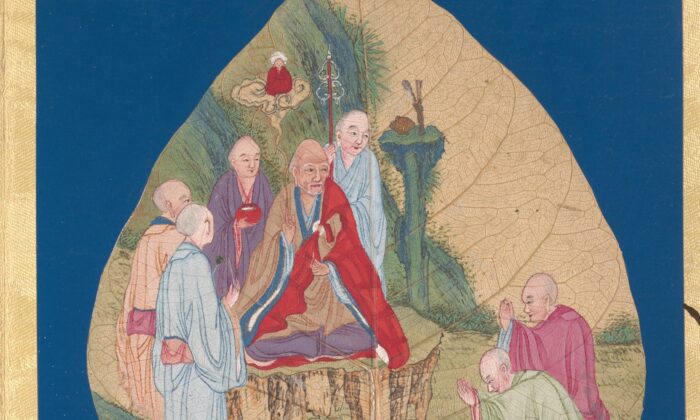 A detail from one page in an album depicting luohans (enlightened beings), 17th–18th century, by an unknown artist. Metropolitan Museum of Art. (Public Domain)
Fine Arts

Make Your Holiday Season Divine at the Metropolitan Museum of Art

NEW YORK—This time of year always reminds me of the divine. With Christ’s birthday being at the center of the holiday season, it’s no surprise. But the holiday also reminds me of divinity from the East. Every year, I attend a performance of Shen Yun Performing Arts—the classical Chinese dance company—and this time of year is when their tour starts.

But this year, I was lucky, or simply blessed. Before seeing Shen Yun, I was given a prelude to their expression of ancient China’s divine culture through a completely unrelated event: I visited The Metropolitan Museum of Art’s exhibition “Another World Lies Beyond: Chinese Art and the Divine,” showing through Jan. 5, 2020.

The exhibition’s poster hooked me right away. Seven ascetic saints draped in robes of vibrant hues of pink and purple were delicately painted on a leaf. Standing on a cliff, surrounded by lush greens, they appeared to be conjuring special powers, opening a window to a celestial kingdom in the sky.

The leaf is part of a collection of 18 beautifully painted bodhi leaves, miraculously preserved for three centuries. The collection is called “Luohans” (“Arhats” in Sanskrit), the first level of attainment status of Buddhahood, when an enlightened being has given up all worldly cravings.

“The stories depict the luohans performing various miracles,” said exhibition curator Joseph Scheier-Dolberg by email. He’s the Oscar Tang and Agnes Hsu-Tang Associate Curator of Chinese Paintings in the Department of Asian Art at The Met.

The bodhi leaf, which looks like a spade or an upside down heart, comes from a type of ficus tree. It’s revered by Buddhists as the sacred Tree of Enlightenment, named “Bodhi tree,” since the historical Buddha attained enlightenment under it in the fifth century B.C.

“In China, painters used leaves of the bodhi tree to create albums like this, which invest the ground of the image with an extra layer of sacred power by connecting it to the Buddha’s awakening,” the website states.

The anonymous artist’s idea to add “an extra layer of sacred power” seems to capture not only what artists of ancient China thought, but also how society thought as a whole.

“For many in pre-modern China, spirituality was ever-present,” Scheier-Dolberg said. “From devotion to one’s departed ancestors to the yearly rhythm of Buddhist festivals to Daoist divination ceremonies, the flow of one’s days, months, and years was often regulated by spiritual engagements.”

The enlightenment attainment status higher than the Arhat is the Bodhisattva—“a Buddhist being of great spiritual accomplishment who postpones enlightenment to work for the salvation of others,” the exhibition’s wall text says. (The third level is Tathagata, which some scholars consider true Buddhahood because the enlightened beings at this level oversee their own paradises to which they can save sentient beings.)

While compassion and self-sacrifice are common to all bodhisattvas throughout history, Guanyin has been viewed as the most benevolent, “always ready to aid a devotee in their darkest hour. This radical compassion—which extends to all beings, in all places, at all times—is captured in Guanyin’s name, which means ‘Perceiver of Sounds,’” the exhibition’s wall text explains.

The 17th-century Ming Dynasty hanging scroll called “Thousand-Armed, Thousand-Eyed Guanyin” illustrates the bodhisattva with 10 heads vertically attached to the main body. The thousand arms and hands—each with an eye in the center of the palm—are spread out to the sides and hold different talismans, such as a battle-ax, lotus flower, bow and arrow, and herbs. Above the 10th head sits another small Guanyin with legs crossed in the lotus position, on a bed of lotuses. Surrounding Guanyin are countless beings, including non-Buddhist figures, such as the Thunder God and the Mother of Lightning, who are among the bodhisattva’s retinue.

The multiple heads and arms of Guanyin could suggest the deity’s transformative nature and ability to adapt in form and methodology to help sentient beings. Sometimes a man, sometimes a woman, Guanyin, for example, could shapeshift from meditator to seductress, depending on how to test, teach, and ultimately help the worshiper grow from the spiritual challenge.

“It is one of the few ritual paintings of this level of quality to survive from this period,” Scheier-Dolberg said. Adding to the piece’s importance are two rare qualities: It is signed by a named artist (Zhou Bangzhang) and dated (1629).

Don’t Judge a Book by Its Cover

You can’t discuss the divine in ancient China without discussing Daoism, the native belief system founded by Lao Zi, which is known especially for its yin-yang symbol, suggesting a harmony of opposing energies or forces.

“The Daoist notion of qi [energy] permeating and regulating the cosmos was powerful and widely held in pre-modern China,” Scheier-Dolberg said. “This belief system argues that all things in the cosmos are connected and dynamically interacting at all times. Within such a worldview, man and nature are not distinct, but aspects of one system.”

The 15th-century work “Daoist Immortal Li Tieguai Receiving a Visitor” shows how seriously these cultivators took their focus of connecting with the Dao. Legend tells us that the Daoist immortal Li Tieguai would go deep into a trance and let his spirit roam outside of his dormant body. On one outing, his spirit was gone for so long that his assistant thought he had died and cremated him. When Li returned and found his body missing, he inhabited the body of a beggar who walked with an iron crutch, and was known thereafter as Li Tieguai—“Iron-Crutch Li.”

Li Tieguai’s lame, disheveled, and wild appearance in this work is juxtaposed with a formally dressed official bowing to him, paying his respects. It’s an important reminder for the holiday—the true gifts of the season aren’t the shiniest ones but the ones of the spirit.