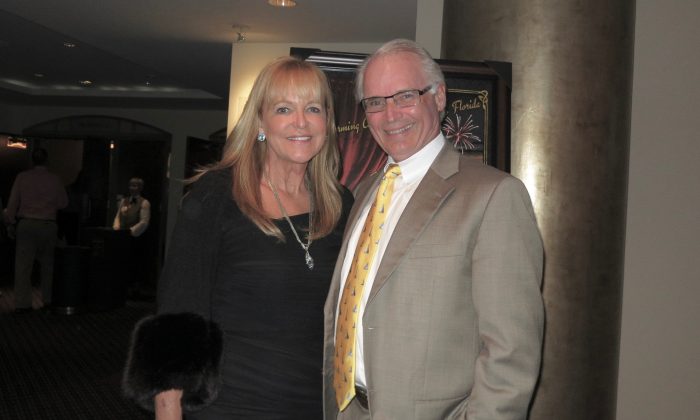 Roxanne and Daniel Vondrachek on Jan. 12 at the Mahaffey Theater at the Duke Energy Center for the Arts. The couple had just watched a performance by the classical Chinese dance and music company, Shen Yun Performing Arts. (Sally Sun/Epoch Times)

ST. PETERSBURG, Fla.—Some cultures are hundreds of years old, others a thousand or even two thousand years old. But few can boast of a culture like that of China, which spans five millennia and combines the intricacies of over 50 ethnic groups and a myriad of different dynasties.

Shen Yun Performing Arts, based in New York, ambitiously strives to revive these 5,000 years of history and civilization by offering audiences a glimpse into many different facets of traditional Chinese culture—from the ancient legends to the dynastic courtrooms to the lands of China’s many ethnic groups to the heavenly realms venerated throughout Chinese history.

The lengthy civilization and arts of China displayed within Shen Yun awed and enthralled Daniel Vondrachek, a retired former business owner. “It is beautiful, beautiful artistic expression that dates back way beyond the Viennese waltz that my wife and I do, that dated back to 1775 in Vienna, Austria. This goes way back.” He grappled with the magnitude and beauty of Shen Yun, so immense and timeless.

He found it hard to fathom that people so ancient could create art as magnificent as that which he saw within Shen Yun. “I am just in awe with the artistic ability, the choreography, the music, and the costumes. You think that back [thousands of] years ago, people had the ability to dwell in the arts like they did—it’s amazing,” he said.

Mr. Vondrachek, former owner of Fireside Office Solutions, an office supply company, attended Shen Yun Performing Arts with his wife, Roxanne, on Jan. 13 at the Mahaffey Theater at the Duke Energy Center for the Arts.

He exalted the performers who have been able to preserve their heritage, their culture, and their traditional arts despite the suppression of the communist regime. Since its takeover of power in China, the Chinese Communist Party has wiped out a vast majority of traditional culture and values through movements like the Cultural Revolution.

Within traditional Chinese culture, Mr. Vondrachek found a distinctive tranquility rare in today’s world. “We are not in harmony with nature and each other and the environment like [the Chinese] were then,” he noted.

“This is phenomenal, and it is absolutely beautiful,” he said.